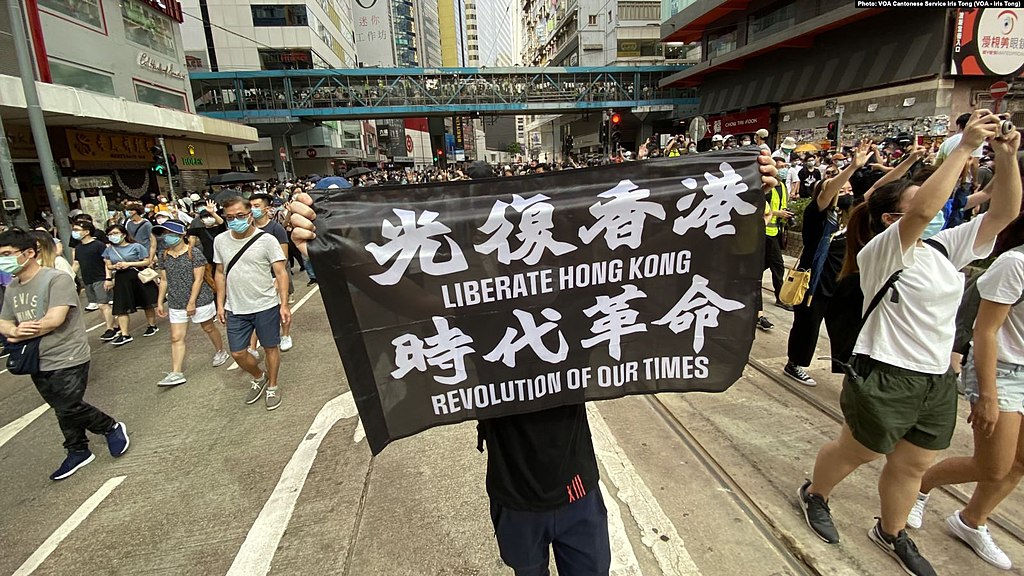 On July 1st, the first day of the implementation of the Hong Kong version of the National Security Law, tens of thousands of Hong Kong people gathered on the streets in Causeway Bay to march. Source: https://www.voacantonese.com/a/5485049.html

The world is watching on agog as China removes Hong Kong’s special status bit by bit, quashing any dissent as it does so. China is a superpower. It is one of the world’s foremost economic and military powers. It is also an expansionist power, with its influence being felt ever more keenly the world over. But how did Hong Kong get here? Why is Beijing behaving as it is? What, if anything, can the world do to help Hong Kong? The answers to these questions lie, not in Hong Kong, but in Beijing.

On 1 July 1997, one-hundred and fifty-six years of British colonial rule over Hong Kong came to an end. The territory switched from being an autonomous part of the United Kingdom to being an autonomous part of China. The handover was seen as marking the death knell of the British Empire – and marking the start of the rapid rise of China as a superpower.

Prior to the handover, the UK and China had engaged in intense negotiations. The UK is a free, democratic state, one in which basic human rights, civil liberties and personal freedoms are enshrined in law and are seen as being the foundation of the country. The same cannot be said of China. Ever since China transitioned to being a People’s Republic in 1949, the Chinese state has actively oppressed the populous, removing most of their rights and liberties as well as any meaningful trace of democracy in the country.

The people of Hong Kong were concerned that being handed back to China would result in this systematic oppression being extended to them. Therefore, in 1985, Westminster and Beijing struck the Sino-British Joint Declaration. Commonly known as ‘One Country, Two Systems’, the Declaration ensured that Hongkongers could continue to enjoy their liberties and freedoms even once the territory became Chinese soil. The Declaration meant that Hong Kong would have guaranteed autonomy within China for half a century after being handed back – a sort of overly-long transition period. In short, the Communist Party of China could continue to govern as it had been doing since 1949 whilst still counting Hong Kong within its borders.

Fast forward twenty-two years – and ‘One Country, Two Systems’ found itself under great strain. Hong Kong Governor Carrie Lam, a pro-Beijing politician, attempted to pass a law that would have allowed deportations to the mainland on the grounds of national security. Cue: months of protesting and rioting. After more than a year of protests, the government in Beijing unilaterally applied a loosely-worded national security law to Hong Kong whilst the territory was in lockdown due to the Covid-19 pandemic. The move by Beijing was in direct contravention of ‘One Country, Two Systems’.

The law is so destructive to Hong Kong’s autonomy, stability and democracy that countries across the world are reacting. Many countries, including the UK, have unilaterally withdrawn from their extradition treaties with Hong Kong. New Zealand Prime Minister Jacinda Arden even went so far as to say that “New Zealand would not extradite anyone for something that is not considered illegal in New Zealand”. Unsurprisingly, many of Beijing’s diplomatic relations, not just with Westminster and Wellington, are now becoming increasingly strained.

The United States has also placed sanctions on Chinese politicians and businesses that Washington considers to have been involved in the stripping of Hong Kong’s status. In response, Beijing has made it clear, especially to the UK, that it will retaliate should other countries follow Washington’s lead.

This brings back to the fore the uncomfortable reality of China’s superpower status. Time and again, superpowers have been able to act with relative impunity. The US and the UK faced little real backlash for the invasion of Iraq. France faced no major consequences for intervening in Mali without international consent. The UK is also allowed to continually and openly sell weapons to Saudi Arabia, despite knowing full well that these weapons are being used to commit war crimes in Yemen. The one, even slight, exception to this, and the example that is perhaps closest to China’s actions in Hong Kong, is Russia.

In 2014, Russia invaded Ukraine. It annexed the autonomous Ukrainian territory of Crimea and then destabilised mainland Ukraine to the point of civil war. Russia’s actions violated, not only international law, but also the Russian-Ukrainian Friendship Treaty of 1997, in which Moscow and Kyiv agreed to respect the other’s sovereignty and territorial integrity, as well as to cooperate closely on matters of national security. The treaty, although decimated by Russia in 2014, formally expired in 2019.

In response to the invasion, the US and the EU placed heavy sanctions on Russian politicians and businesses, causing an already weak Russian economy to dramatically recess. In time, these sanctions were lifted. The Russian economy began to recover, as did Vladimir Putin’s reputation within Russia. However, Russia still occupies Crimea, a situation that is unlikely to change any time soon.

Similarly again, the reasons for Moscow’s behaviour towards Crimea are not dissimilar from Beijing’s towards Hong Kong. In 1954, during the Soviet era, the Russian Soviet Socialist Federal Republic handed Crimea over to the Ukrainian Soviet Socialist Republic, a move that was deeply unpopular among Crimeans. These borders carried over when the Soviet Union disintegrated in 1991. Similarly, Beijing has never been completely comfortable with its SARs (Special Administrative Regions): Hong Kong and Macau (a former Portuguese territory handed back in 1999). The disintegration of the Soviet Union is also a key reason why the world was prepared to take strong action against Moscow in 2014, but is perhaps more hesitant to do so now against Beijing.

The collapse of the Soviet Union took Russia from being, alongside the US, a global superpower to a middle power, with a stagnant economy and third-world societal problems. Russia is now, once again, a major power, but it has never truly regained its superpower status. Now, thanks to the rise of China, it is unlikely to do so. As was seen when the UN unexpectedly passed a resolution condemning Israeli settlements in the West Bank in 2016, the world is prepared to act against major powers, but is reluctant to do so against superpowers.

Perhaps, in part, the difference between the global standings of Russia and China answers the question of what can, or, more aptly, will, be done to help Hong Kong. The UK has offered a pathway to citizenship to Hongkongers who hold British Overseas passports or were born in Hong Kong prior to the handover. Beyond that, there appears to be little will to do much else, even for young Hongkongers, those who are most passionately opposed to Beijing-led rule.

Whatever does or does not happen to Hong Kong and China in the coming months, one old adage perhaps best summarises the situation: justice delayed is justice denied.