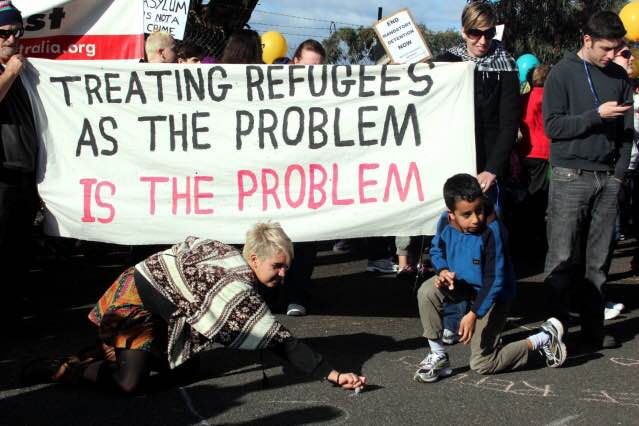 The Syrian refugee crisis is the largest humanitarian disaster since WW2. 13.5 million people need humanitarian assistance within Syria. 4.6 million refugees are on the run from ISIS and the authoritarian regime of Syria. 6.6 million people are currently displaced within Syria: half of them are children. Countless lives have been lost at sea, and hundreds of thousand families are being torn apart by war. It can be extremely hard to wrap your mind around this. The media is feeding us with horrific images and blearing headlines. The world is in turmoil, and suffering is all around us. However, I would advise you to try to look at it from a different angle. Because in the end, it is all about perspective.

Imagine this: Millions of refugees. Each with their own hopes and dreams for the future. Some running away from prosecution, others from a war torn country where the resources are limited, and the people in power are trying to bring about an extremist Islamic revolution. Several millions of refugees are fleeing to nearby countries to seek cover and safety.

Yet, some brave souls dare to dream big. They dream of a brighter future in better place. A place where they can feel completely safe and secure. A place with enough resources for them to make a life worth living. A place where they can experience cultural and religious freedom, and freedom of speech. Somewhere their kids can grow up in a safe and well-equipped environment, where they can get an education and become a person of their own. And in addition, most importantly, they dream about a place without wars, where anything but peace would be unthinkable.

Tens of thousands of refugees have come all the way across Europe to apply for asylum in Norway. The main problem that refugees encounter when coming across our borders is being met by a system that cannot take proper care of them. It is all about our conservative government and our borderline inhumane migration politics. It needs to change, and it needs to change fast. Firstly, we have enough money to take care of them, yet our policies are unrealistic. Our own minister of migration and integration, Sylvi Listhaug, came out with 40 new asylum related retrenchment measures, who all have one thing in common. They’re meant to make life as a refugee in Norway as hard as possible, just to keep more refugees from coming our way.

And what’s the result? Low-quality refugee reception centres. A state with no ability to integrate them into society, despite being one of the richest, the most democratic and one of the most privileged countries in the world. This mix of a lack of safe housing, a lack of effective integration, and borderline inhumane migration politics, is causing them more harm than it is helping them. This must change. The refugees must gain a feeling of safety, or else we have failed utterly as a privileged country.

We young liberals need to react, because things need to change. We need to change our inhumane immigration politics, one way or another. Because the last thing we need in such a crisis is distractions, distracting us from the real problems. How can we make the best of our current situation, make a change? I believe it all starts with participation.

If there is one thing we need to improve upon, it is participation. This includes the governing forces, but most of all, it includes the people. Active participation works, and it has shown itself to be a very important contributing force time and time again. It is easy to believe that individuals cannot make a big difference in society, but we must not forget what a difference we can make as a unity. As a society, as politicians, and as active members of the democracy we are privileged enough to be a part of. We must not waste it. We must use our voices, our votes, and our consumer power to push our governments into passing policies that will make refugees’ lives easier, instead of making them harder than they already are.

If we want to help the refugee crisis, we need to stop being selfish, and start co-existing. The world, as a unity, needs to find shared goals and tactics how to reach these goals. Only then, we can really focus on the real problems at hand.

All though most of the Norwegian citizens are open-minded about the refugees who are seeking asylum in Norway, there is still a lot of hateful rhetoric flourishing on social media. This rhetoric unfortunately reflects the overpowering negative spirit found in worldwide commentary feeds. I think it all comes down to a rising international nationalist movement and a bloated self-image. These ignorant people have a hard time accepting that these refugees need our help. The image of thousands upon thousands of potential terrorists, or so-called “happiness hunters”, overshadows the truth of the matter, that these are humans on the run that need our help. They are not gold-diggers, they are refugees. Period.

This is not just ignorant; it is utterly false way to portray these people. It is wrong, it is shameful, and I want no part in it.

Camilla Westvik is a member of NUV  (Young Liberals of Norway) She is currently the leader of the regional branch in Nord-Trøndelag, and the deputy leader of the local branch in Steinkjer. She currently studies drama and will start her politics, philosophy and literature studies in the fall.