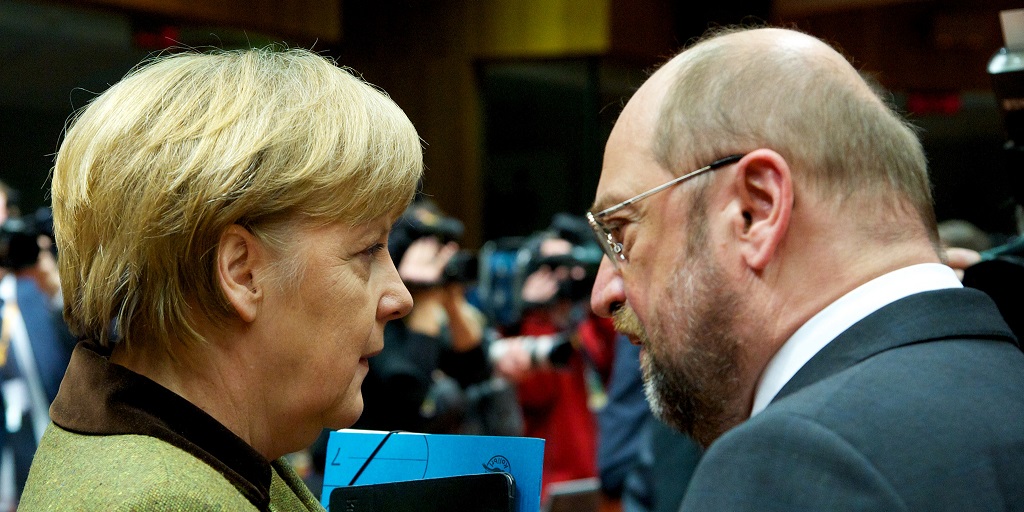 On the third of September, 16 million Germans watched a TV debate between incumbent German chancellor Angela Merkel from the Christian Democrats (CDU) and her contestant Martin Schulz from the Social Democrats (SPD). The debate took place three weeks before the federal election on September 24.

Much has been said about the debate. Most viewers found Merkel to be more convincing than Schulz. Overall, the debate hasn’t changed the polls though. Merkel is still set to win the election, as her party is currently polling at around 38%. Schulz’s Social Democrats are unchanged at 22%. However, as Germany and its political development matters to its neighbors and the world, it makes sense to have a look at the issues discussed in the debate.

The first two-thirds of the debate were mostly taken up by international issues. Schulz and Merkel debated a common European asylum and migration policy as well as how to respond to the great influx of refugees into Germany. Also, they talked about the EU accession talks with Turkey (which both believe are doomed to fail) and about North Korea.

It was only after one hour that they moved on to domestic issues. They talked about the retirement age (which no one wants to raise) as well as a toll for foreign drivers and a recent Diesel scandal.

The debate itself was civilized. There as a lot of agreement on most issues and Schulz rarely attacked Merkel. Some commentators joked that the debate seemed rather like the start of a new ‘Grand coalition’ between the two parties, like the one that has been in place for the last four years.

However, what matters most in this debate is what wasn’t talked about. Looking at the fundamentals, it is easy to get the impression that Germany is doing well. Wages are rising and unemployment is around 3.9%. Also, there has been no populist backlash and most Germans seem too risk-averse to embrace political experiments such as Brexit or Donald Trump. Merkel and Schulz seem to agree. Both preferred to talk about international rather than domestic issues for most parts of the debate.

Nevertheless, it would be good for them to pay some more attention to their own country: Germany is rapidly falling behind on digital issues. Germany fell from 10th to 25th for broadband speed between 2010 and 2016 and performs even worse when it comes to mobile data speed. Most German businesses don’t even have more than 20 Mbps in their offices. In the long run, this could seriously harm German manufacturers’ and smaller businesses’ competitiveness. The lack of digital infrastructure goes hand in hand with underinvestment in infrastructure as a whole. Since 2010, the net value of German infrastructure has declined. Around the country, 20% of bridges are seriously lacking.

Also, education is chronically underfunded. In some states, half or more of all schools are in urgent need of repair. Most schools don’t offer any technical education whatsoever. The use of tablets and computers is not frequent in schools and in most states not on the syllabus.

To put it in the words of the Economist, Germany is ‘dozing’ away even if it has some problems to solve. The debate has proven that neither of the existing parties has the will to solve those problems. Neither does Merkel, who seems to be ‘administering’ the country rather than making it future-proof. Nor does Schulz, who seems to be more focused on raising taxes and the minimum wage.

This is where third parties like the Free Democrats (FDP) come in. After four years in opposition, they are keener on change, and may bring some new initiatives into German politics. Maybe, for the sake of the sustainability of German wealth and stability, it may be good for the ‘Grand Coalition’ to be replaced by a smaller one, including a wilder partner such as the Free Democrats.