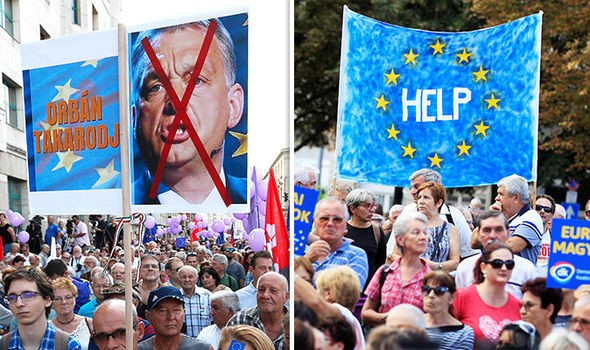 Hungary has undergone a significant transformation in the last decade, one that is often described as a democratic, or rule of law, backsliding. The roots of this negative development can be traced back to the landslide victory of Viktor Orbán’s Fidesz party at the 2010 general election. With a supermajority in the parliament, the ruling party was granted the power to carry out a number of constitutional amendments. Since then, the government has dismantled Hungary’s independent institutions and removed several checks and balances. The Fundamental Law replaced the previous Constitution and its preamble promotes conservative Hungarian values. With its new supermajority in the parliament, Fidesz has altered the electoral system to its advantage by gerrymandering: making changes in the allocation of votes. Other amendments include provisions to limit the power of the Constitutional Court by allowing a two-thirds majority of parliament to overrule its decisions as well as the restriction of political advertisement to state media alone. Government-friendly businesses have been encouraged to buy up newspapers, magazines, television stations and news portals with the aim to gain full control of the media.

Orbán has never denied his autocratic aims. In 2014, he referred to Hungary as an ‘illiberal democracy’ for the very first time and announced that the government was ‘building a non-liberal nation-state’ that promotes liberal principles selectively. Since then, Fidesz has gradually transformed the country. An analysis by Freedom House well-illustrates this negative transition. In 2015, Hungary was downgraded from a ‘Fully Consolidated Democracy’ to a ‘Semi Consolidated Democracy’and later in 2019, Hungary was the first and only EU country graded as ‘Partly Free’. One of Fidesz’ latest polices has challenged non-governmental organisations (NGOs) that raised objections against the government’s recent reforms. The political opposition is weak and fragmented in Hungary; therefore, civil society is the only collective actor that can effectively fight back against the government. In June 2017, the parliament approved a bill that requires NGOs to publicly label themselves ‘foreign-funded’ if they receive more than £26,000 annually from foreign sources. The ‘Foreign Agent Act’ aims to limit the power of civil society by undermining the credibility of these organisations and burdening them with bureaucratic red tape. After the law had entered into force, the European Commission found that it was in breach of fundamental freedoms, such as the right to freedom of association and free movement of capital. In December 2017, Hungary was referred to the Court of Justice of the European Union. The Court has not delivered a decision on this case yet and therefore the Foreign Agent Act is still active. As a result, many organisations have closed their operations or moved to another country.

The attacks on civil organisations intensified in the run-up to the 2018 general election. The increasingly authoritarian regime of Viktor Orbán is one of the greatest masters of fearmongering over migrants in Europe. He was able to capitalise on the 2015 refugee crisis, which is still an unsolved issue for the EU. The government’s anti-immigration campaign succeeded and Fidesz won a supermajority for a third consecutive term in office. In its discourse, Orbán accused foreign-funded NGOs of meddling in the country’s domestic affairs and undermining Hungary’s sovereignty, national values and identity. He portrayed his party as the bastion of European Christendom against Muslim immigrants coming from the Middle East and Africa. His stance was popular amongst Hungarians due to the shared cultural memory of more than 150 years of Ottoman occupation of medieval Hungary. Orbán alleged that ‘organisations of George Soros are working tirelessly to bring hundreds of thousands of migrants into Europe.’ George Soros is a Hungarian-born Jewish-American financier and philanthropist who has created the Open Society Foundations with the mission to end corruption and promote freedom and justice globally. In May 2018, the Foundations moved to Berlin from Budapest, arguing that the ‘increasingly repressive political and legal environment’ forced the organisation out of Hungary. Soros is a frequent target of antisemitic conspiracy theories about Jews supposedly controlling the world. He is targeted not only in Hungary but in the US, UK, Australia and many other countries where right-wing movements are present.

After the 2018 general election, the Hungarian government adopted a new law that prevents refugees from seeking asylum by criminalising activities associated with migrant and refugee support. The law also imposes a 25% tax on foreign donations. This anti-immigrant ‘Stop Soros’ law violates a number of human rights, such as the right to be free from discrimination and the right to seek asylum. As a response, the European Commission launched an infringement proceeding against Hungary and referred the case to the CJEU in July 2018.

The above examples are only a few of the many breaches in EU law that have led the European Parliament to declare that Hungary is at ‘clear risk of a serious breach of the EU founding values’ and demand the European Council to approve the initiation of ‘preventative measures’ laid down in Article 7 of the Treaty on the European Union. Amongst the key concerns, the Parliament includes ‘judicial independence, freedom of expression, corruption, rights of minorities, and the situation of migrants and refugees’. Since this monumental vote, EU ministers have held two hearings with the Hungarian government, one in September 2019 and the other one in December 2019 with no positive results; in fact, the situation in Hungary has worsened since the triggering of Article 7. During the COVID-19 pandemic, the Hungarian parliament, controlled by Fidesz, has passed a law allowing Orbán’s government to rule by decree for an indefinite time. The emergency law can only be ended by a two-thirds vote of the parliament and presidential approval. It is argued that the emergency law is the government’s pretext for a power grab that is absolutely not necessary in the fight against COVID-19. This assumption was validated when Orbán used its emergency power to pass controversial measures to restrict human rights, including a proposed bill that would end the legal recognition of transgender people, violating their rights to self-determination. At time of writing, the EU has yet to respond to Orbán’s latest autocratic grip on Hungary.