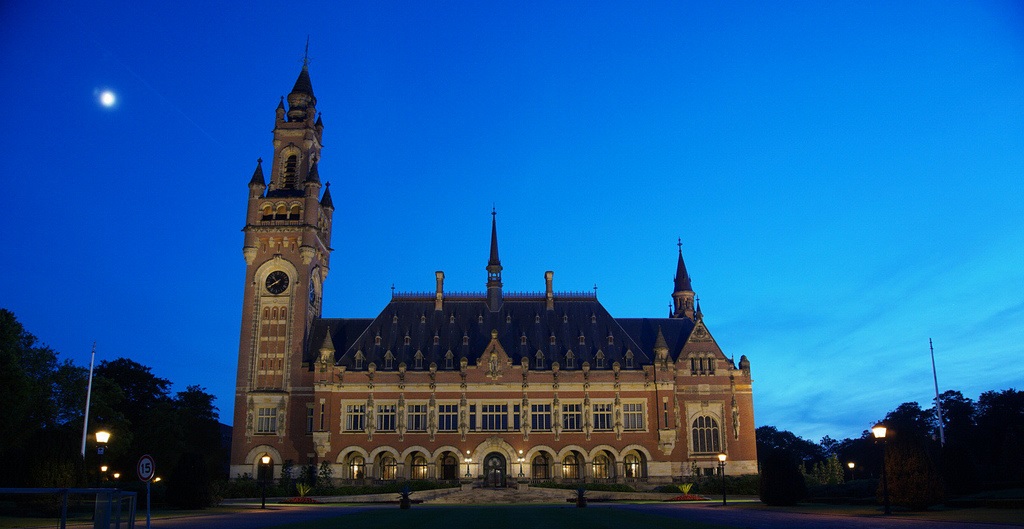 The International Court of Justice (The Hague, Netherlands)

Catalan democratic institutions – both its parliament and its government – have called for a popular vote on whether Catalonia should declare itself independent from Spain. This has caused a reheated constitutional crisis, as the Spanish constitution effectively prohibits any kind of popular vote on secession issues in Spain as a whole and in particular in its regions. The Spanish government considers the vote illegal and has made abundantly clear that it would use all its powers to halt Catalan efforts towards independence. These events have been characterised by political stalemate, a lack of understanding, mutual irresponsiveness and increasingly irrational rhetoric on both sides. On top of that, the European Union (EU) has downplayed seriousness of the differences between the Catalan and Spanish government to an inner-Spanish issue.

The conflict shows that there is no satisfactory or even unitary mechanism to deal with secession issues in Europe. A pressing issue, as this is not the only European secessionist movement. Similar movements are gaining momentum in places like in Scotland, Tyrol, the Basque Country or in Flanders and Wallonia – just to name a few. When it comes to secessionism, the Member States as well as the EU itself fail to sufficiently integrate regional peculiarities in their own concept of post-national statehood. But is this solely a European problem?

As the question suggests, secessionism is also a global issue dating back to the beginnings of political history. As some famous political philosophers described: there is nothing natural about constructing a state. In Leviathan, Thomas Hobbes refers to ‘internal diseases’ that tend to the ‘dissolution of the Commonwealth’. In The Social Contract, Jean-Jacques Rousseau finds ‘the body politic bears within itself the causes of its own destruction’. In effect, states strive – as does each individual – for legitimacy in constantly changing contexts. They can be born but potentially also cease to exist if they fail to internalise societal realities. As a consequence, the formation of statehood follows a political logic; and legality can be challenged when it lacks enough popular adhesion, or is not broadly accepted as legitimate and rightful. In its essence, secessionism is rather a political than a legal issue.

If we look at this from an international perspective, we can see that this view has legal precedent. In the post-colonial context, the International Court of Justice (ICJ) has refrained from ruling on the existence of any positive entitlement to secede, nor did it point to any rule prohibiting the declaration of independence. The Court intentionally left the question of anti-imperialist claims to independence wide open, seemingly implying that such instances would be assessed on the individual character of each claim. With this in mind, Catalonia’s bid for secession can be seen as a carefully crafted appeal to the democratic rather than the nationalistic aspirations of self-determination, one less juridical than political in nature. In fact, the questions remain not only how we deal with secessionist claims but also from which perspective do we think about secessionism in general?

Internationally, thinking of secessionism follows a rather negative approach. In this context, self-determination in International Law, as submissions by member countries to the ICJ rulings exemplarily state, only applies in situations of ‘abnormality, or rupture, or revolution, war, alien subjugation or the absence of a meaningful prospect for a functioning internal self-determination regime’. Indirectly, the EU – also by its treaties – follows this view and insists on the nation state as the only constitutional carrier to maintain European unity. In consequence, the EU’s proclaimed ‘unity in diversity’ only informally applies to its regions and showcases the lack of legitimacy and representation the EU needs to acknowledge. Thus, the Spanish-Catalan conflict is not at all just an inner-Spanish issue but also both a European and a global one.

Considering common European values, the EU fails to take on the role of an observer and a moderator in this conflict and to lead the international discourse on secessionism linked to democratic principles of representation and respect of identity in a positive and more pragmatic way. From this perspective, the Catalan aspirations towards independence could be a starting point for a more democratic and inclusive European Union that embraces multi-faceted identities, as well as strengthens a common feeling for European unity. As we can see, there is a (European) way to deal with secessionist movements; we just need to be brave enough to not necessarily think of secessionism as a negative but as a positive instrument to change societal representation for the better.

Nicolas Lembeck studied International Relations and Economic History and currently works as Political Adviser in the European Parliament. He’s in charge of North-American relations and UN issues at IFLRY’s member organisation Junge Liberale (JuLis), the progressive youth movement of the German Free Democratic Party (FDP). You can reach him on twitter @NicolasLembeck, or via email: NicolasLembeck@julis.de.