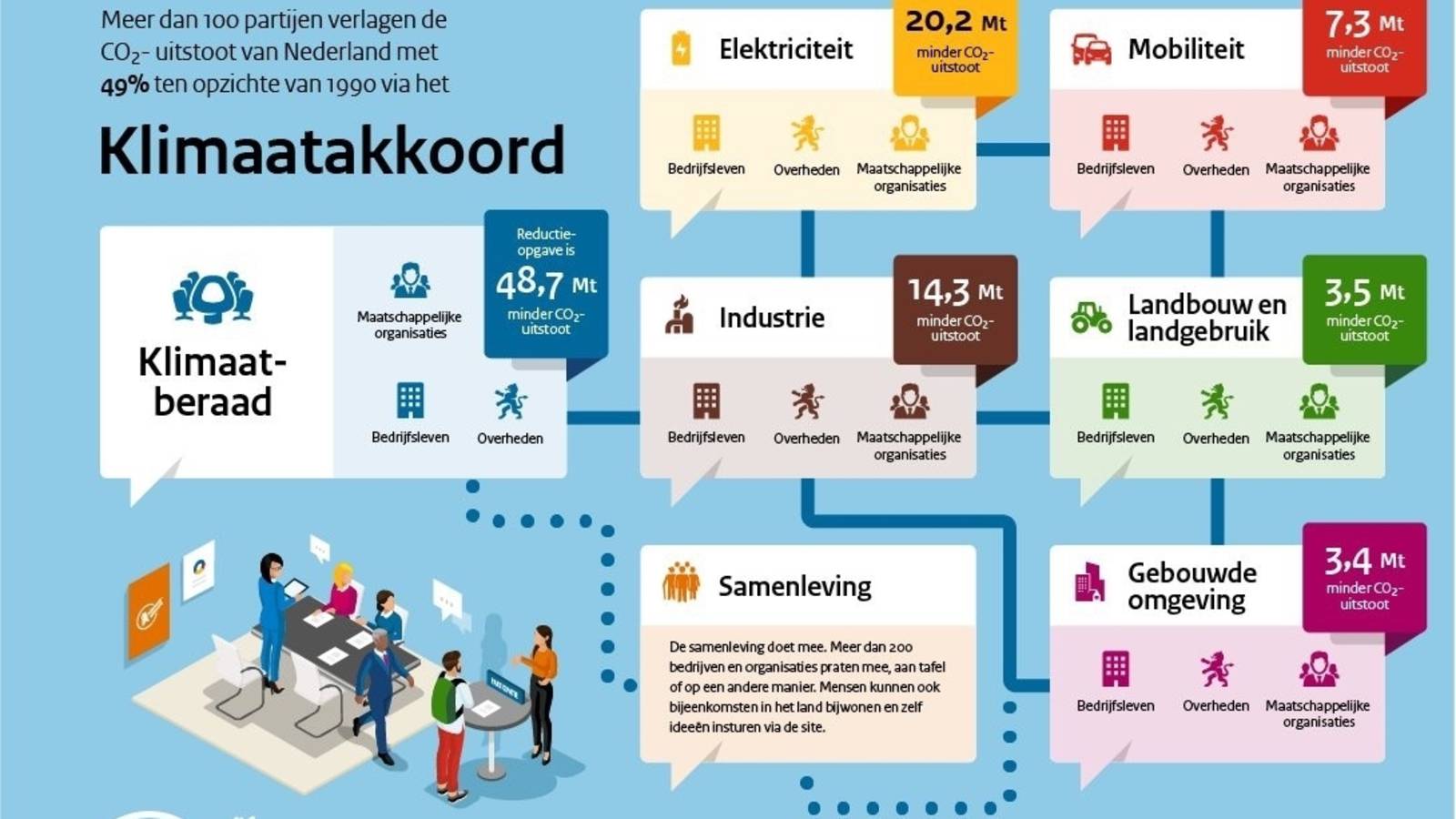 Infographic published by the Ministry of Economic affairs and Climate detailing the agreed reduction in CO2 emissions by different sector.

In order to achieve the aims of the Paris agreement, the Dutch government passed a law that obliges itself to do so and let the people of the country decide on how to do it.

In 2015, 195 members of the United Nations Framework Convention on Climate Change (UNFCCC) signed the Paris Agreement, agreeing to mitigate global warming and keep the increase in global temperature below 2°C. The contributions every individual country should make to achieve the worldwide goal are determined by every country itself. Although you might think this would lead to moderate ambitions by the joining countries, the Dutch government decided to put the bar quite high for itself (of course compared to the other countries that signed the agreement). In 2018, the Dutch House of Representatives (‘de Tweede Kamer’) passed a bill mandating that the Dutch CO2 emissions will be cut by a minimum of 95% relative to 1990 by 2050. In addition, the aim is to cut them down by half relative to 1990 by 2030.

When this law was passed the question that remained was: how? The Dutch government decided not to answer this question by itself, but let it be answered by society. The Ministry of Economic affairs and Climate organised a series of negotiations that took place in The Hague over several months. The negotiations were separated into five different ‘climate tables’. There were five tables, each discussing how to reduce CO2 emission in a particular sector of the economy. The five sectors were electrical power generation, industry, real estate, mobility and agriculture. Every table was attended by lobbyists from relevant businesses, environmental organisations and other interest groups. Due to the different interests of the represented parties at each table, negotiations were difficult and took a long time. It was hard for each table to find some form of consensus. Just before the results were finally published, three important environmental organisations and one of the main trade unions decided to abandon the agreement. Making it all bittersweet in the end.

But, luckily for them, the results of the negotiations couldn’t be ignored by the government, so there was still hope. A couple of months late, on the 28th of June 2019, the government presented the definitive measures to achieve the aims set by the climate law it had passed a year earlier. The plans were altered a bit from what the climate tables had agreed on. A controversial arrangement, whereby motorists pay road tax according to when and where they drive (instead of a flat fee), made it into the agreement. Also controversially: there will be a slight tax on CO2 emissions for the industry. The government emphasized that the industry now will pay the biggest share in cutting down the emissions – reducing the pressure on private citizens slightly. For the trade union that decided to drop the agreement it still isn’t enough. The environmental organisations are divided in their response. Also, the parliamentary opposition was not amused by the agreement. The parties on the left of the political spectrum think the measures don’t go far enough, parties on the right think they are going too far.

D66, the mother party of my organisation the Jonge Democraten is a part of the governing coalition at the moment, and therefore agrees with the agreement. We, the political youth organization have no official opinion about it (yet). What we do think is that there should be a general tax on polluting all over Europe, so that social costs of polluting will not be paid by the society as a whole, but by the ones that pollute. In that way, polluting becomes much more unattractive and the development of less polluting products is stimulated.

On the surface the government presents itself confident in reaching the goal it set for itself. But it won’t be the first time the government doesn’t adhere to the agreements made.

Bas Buise is a chemistry teacher at a secondary school in The Hague, the Netherlands. In his spare time he is an active member of the social-liberal Jonge Democraten, where he recently held the position of policy spokesperson for sustainability. He is currently a member of the editorial board of JD’s magazine DEMO.