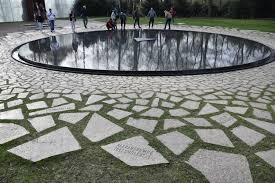 Memorial to Sinti and Roma in Berlin, via Wikimedia Commons

Romani people such as Roma,Sinti, Iberian Kale, Welsh Kale and many others are the biggest minority in Europe- and probably the most forgotten.

Approximately 10- 12 million Romani are living Europe, though the number of population can only be estimated as many of them keep their identity hidden.

Like the Sinti and other Romani people, the Roma emigrated from the region which is now India and Pakistan over 1000 years ago. Arriving in Eastern Europe around 600 years ago the originally nomadic tribe began to settle in Europe.

After centuries of attempting to integrate, the majority of Roma became settled in Central and Eastern Europe and only a small percentage remains unsettled.

The history of Roma in Europe is permeated by discrimination, persecution, expulsion – and often forgotten. During the Byzantine period, Romani people were slaves of the state, outlawed and worthless. The persecution of Roma reached its peak during World War II. More than 500.000 so called “Gypsies” have been murdered or sterilised by the Nazi regime. Only in 1982 was the genocide of the Roma acknowledged internationally.

Until now the circumstances did not improve for the Roma population of Europe. Many of us might not even be familiar with the names: Roma, Sinti or Kale, but rather with the expression of a “Gypsy”. Moreover, it is not only an expression, but a name that indicates certain characteristics. The stereotype of the dirty and criminal Gypsy, from whom you might better hide your wallet as he is very likely to be a pickpocket, is widely spread among European states.

Due to these prejudices Roma people are experiencing discrimination on a daily basis and are suffering from their social exclusion. Looking at statistics (https://fra.europa.eu/en/themes/roma) about the integration of Roma people the improvements over the last centuries are only minimal.

The most significant proportion of Roma lives in Central and Eastern Europe. As a result of decades- long ignorance by the Balkan governments, child labour and abuse, low school attendance, police discrimination and drug trafficking are the problems Roma societies are facing.

The proportion of Roma living in poverty in the Balkan states exceeds up to 75% (https://fra.europa.eu/en/themes/roma) . The poor situation of many Roma is caused by a disproportionately high rate of unemployment and the lack of access to education.

According to the European Union Agency for fundamental rights about 63% of young men and 72% of young women in the Roma community are unemployed. In the Balkan states, 80% of Roma have a salary lower than the country`s average income.

Furthermore, more than half of Roma between the age of 6 and 24 do not attend a school. Especially in countries like Bulgaria, Greece, Hungary and Slovakia the proportion of Roma early school-leavers is disproportionally high compared to the general population in these states. Even though the right to education is declared in Article 28 of the UN Convention on the Rights of the Child, the disinterest and inability to tackle problems of the Roma society lead to an abuse of the rights for children.

Looking deeper into the data it becomes clear that women and children are bearing the brunt of the discrimination. Compared to men, Roma women are earning even less money and are married young. As access to education has been neglected to the Roma population, the development within the community itself concerning human rights and modern living standards is slowed down.

In the worst cases Roma communities are even separated physically from the rest of the population by squatter communities or tent cities.

Neglecting the access to public health care and discriminating a whole people on the labour market cannot be seen as an improvement towards human rights. Over the past years especially, Mediterranean and Balkan countries have failed to change their policy.

The former Prime Minister of Bulgaria, Bojko Borrisow, referred to Roma as “bad human material” and wished to expel them during his election campaign in 2009. His utterances caused an antiziganist movements in the Bulgarian society which cumulated in protests in 2011 /2012. Following the murder of a woman in Rome by a Roma, the Italian government declared the Romani population to be a “national security risk” in 2008.

These latest developments demonstrate the importance of targeting the situation of Roma people in Europe. The “otherness” of “them” still awakens such a fear in the European society that we might have to reconsider how open minded our societies really are, seeing that we cannot even peacefully co- exist with a people who have been calling Europe their home for more than 600 years.

Besides all the social injustices that need to be eliminated, a few social advancements have to be acknowledged. In many European countries the minority status of Roma has been recognized. Over the past years the first cultural organisations and political parties have been established. Romani MEPs or national political represents are a great improvement, because they give a voice to the largest minority of Europe. The cultural characteristics of the Roma population, like their language, have also ´brought rising awareness through the publication of books and newspapers in their own language.

Governmental programmes and financial as well as personal support could solve the problems in the Roma community. But first we need to open our eyes to what we chose to neglect for so long.

It is now on the national governments and the European Union to acknowledge the social wrongs and to pave the way for common future. Long enough we only talked about “them”, now it is time to listen.