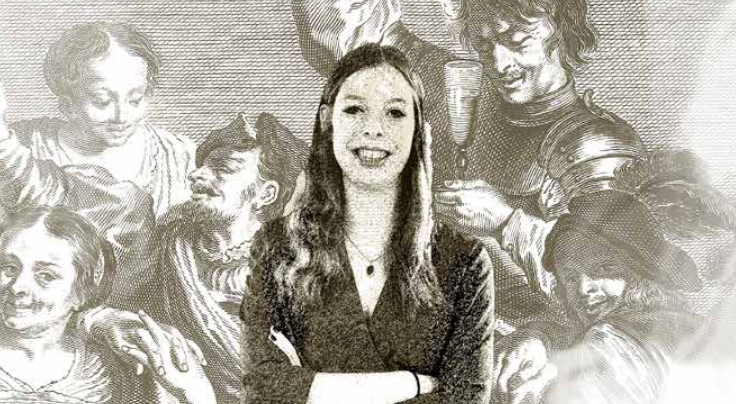 Meet Astrid Zwinkels, a 25-year-old Jonge Democraten member, who tries to influence Dutch policy on Prostitution. Not only is her academic career dedicated to this subject, she is also involved in JD’s working group Diversity & Participation. Apart from that she is official secretary of the student council of the University of Amsterdam. DEMO magazine spoke with the ambitious Astrid about her career and her experiences in JD.

“How I ended up joining JD? By coincidence actually,” she says smiling. She was dating a fanatic JD board member from The Hague. At that time, she even had some aversion against JD. “At the time I believed it was a bit of an elitist club. My boyfriend went to events every week. Despite my prejudices I thought, I’ll just come along! Being at the events won’t do any harm, and if I don’t agree with something I’ll just argue with them. Then I found out that actually JD wasn’t as elitist as I thought. Moreover: it turned out that people in JD actually welcomed dissenting opinions. At some point I had been joining event so often that I started to realise I was free-riding. Subsequently I decided to join, and become active in the working group Diversity & Participation. I even considered applying for the programme manger position, but in the end I didn’t have enough time for that.”

She is still active in this work group, especially in the field of prostitution , this is ‘her’ subject. “At university I started off taking a course called Language & Communication. After that, through a detour studying English, I ended up starting a degree in Gender Studies in 2011. In the first year I had a course on prostitution. During the course we discussed the sex industry, relevant policies, and the actors in the field. It didn’t take me long to start noticing that many prejudices about the subject were mistaken, and I noticed myself falling in love with the subject. I was keen to share the knowledge about prostitution that I had gained, and it was always a nice ice-breaker at birthday parties. Despite changing degrees a few times, I immediately realised this was my passion. In this field I could really make a difference, that’s why I went for it”

And so she did. At this moment she is working on a dissertation on the subject, for which she gathers information form experts, people with experience in the industry, and policy makers. Her dissertation concerns the impact of various lobbying groups on policy makers in the sex industry, particularly focussing on the E.U.

It goes without saying that this is a good fit with her work in the working group Diversity & Participation. “This working group is a serious, fun but also very important working group. The activities which have taken place have the potential not only to have a positive, but also a significant influence on prostitution policy. For example, through the working group we organised an expert meeting with different players in the sex industry. People like sex workers, researchers, but politicians and people letting windows used by prostitutes to display themselves. That way you get to hear real stories, and no made-up cowboy stories about ‘loverboys’ and other incredible stories about very naïve women. Such as stories about girls who were in love with bad guys, and out of fear for them would sleep with his entire circle of friends. I won’t deny that this happens, but it is a stereotype that most of the time doesn’t match reality. It is important that policy, and also the public discussion about prostitution policy is held on the basis of information about what is happening in the real world. Such a public debate has been much less prevalent than you might have thought when it comes to a topic like this. If you compare prostitution to say gay rights, you realise almost immediately that the discussion surrounding this issue has been far less detached from the experiences of the people that are concerned. It is due to the lack of such a discussion, that we got together with a representative of the Prostitution Information Centre. We hoped at the time that we could use the results of this to work together with the JD working group Justice and Philosophy. But sadly this didn’t work out, because other topics were considered more pressing.”

Despite a few setbacks, the topic is still high on the agenda, within JD, but nationally and internationally as well. The Dutch parliament will probably vote on the regulation of prostitution before its summer recess, and the European Parliament has the topic high on its list of priorities. Astrid is hoping for the best, but she is worries decisions could take prostitution policy a step back. “At this time you see that political parties often don’t have the proverbial balls to defend good prostitution policy, because they fear they will be perceived as condoning human trafficking and forced prostitution. This misconception is having a very detrimental effect. As long as the misconception that all prostitutes are victims of human trafficking and forced prostitution prevails, the laxity, bordering on unwillingness, to change the sex industry will remain. This prevalent view simply doesn’t stroke with reality. As a result of this, sex workers who want to work legitimately are being hindered in many ways. Add to this that the desire to change people’s perceptions is absent, and you can understand the frustration of people who work on improving prostitution policy.

“People feel uncomfortable thinking about prostitution, that is why they cling to existing dogmas and black-and-white thinking. Reality however displays a subtle mix of situations, varying from near black, through various types of grey, to nearly white. The sex industry is a diversified sector with enormous demand and supply, and both demand and supply vary tremendously. This trend, in which it is made increasingly difficult for sex workers to do their job is continuing. At the time prostitution windows are being closed as an end in itself. D66 offers a shimmer of hope on the horizon, but at the moment all it can claim as a victory is that less windows will be closed than was originally planned. It’s not the hero that the sex industry needs right now, and not the one it deserves. At this point in time, it comes down to reducing domestic violence by reducing the amount of homes.  If you exchange ‘domestic violence’ with ‘illegal prostitution’ and ‘homes’ by ‘windows’, then you get the essence of contemporary Dutch prostitution policy. You don’t end illegal prostitution by shutting down windows, the only thing that is diminished is the possibility to do it legally. “Apart from striving for complete decriminalisation or a full ban on window prostitution, there are many compromises which politicians should be ready for by now: The development of good legislation. Legislation which is well thought out, and which isn’t based on dogmas, moralistic ideas, and gut feeling.”

In conclusion Astrid has advice for young JD-members, and for opinionated young people in general. “Go to events! Especially when you have prejudices, or when you think you won’t agree with that will be discussed. The space offered to divergent opinions is an important element of JD culture, and it allows for open debates. It’s a missed opportunity if talented, opinionated young people don’t make themselves heard. There is a lot of scope and appreciation for people like that, and it would be a terrible waste not to take the opportunities that JD offers.”

This is a translation of the article originally published in Dutch titled ‘Wil om beeld over sekswerkers bij te tellen ontbreekt’, published in the June issue of DEMO, the magzine of the Jonge Democraten. The Dutch text was written and edited by Victor Weerensteijn, and translated by Krijn van Eeden