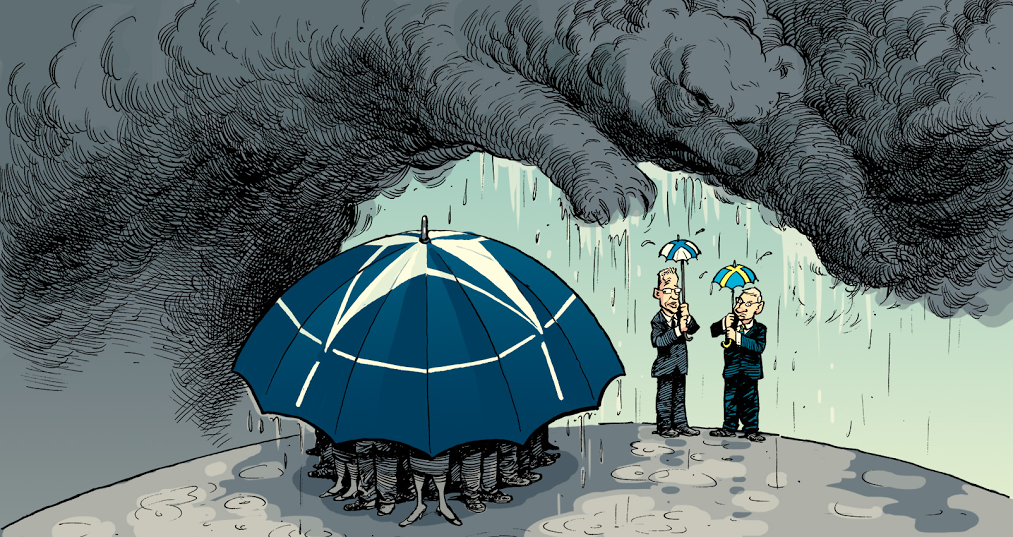 As some of you may know, Sweden is not a member of NATO. Sweden has, though, a deep and long standing history of cooperation with NATO and NATO members bilaterally. In this article I will explain Sweden’s history with NATO and how the debate about membership in NATO has developed. As well as the relationship towards the alliance itself and the recent signing of the Host Nation Support agreement.

During the second world war Sweden was a neutral country. Something that I, and some swedes with me, feel ashamed about. We allowed Germany to transmit trains with army personnel back and forth to Finland and Norway. And we also provided Germany with much of its well needed iron ore. This policy ensured that Sweden was not invaded by Germany, unlike Denmark and Norway, as a German occupation would need troops that were needed on the eastern front, and Sweden already succumbed to most German demands. During the second part of the war, when the advantage started tilting in favour of the allies, Sweden got bolder and started “disobeying” the Germans. “Turning the cape after the wind,” as many swedes say. In late 1944 and early 1945, a Swedish invasion of Denmark and Norway was planned, but was then put on ice. Although, during the entire war Sweden provided the allies with much intelligence.

After the war, one of Sweden’s most embarrassing actions ever occurred. We deported Baltic people (Estonians, Latvians and Lithuanians) to the Soviet Union upon its request. This may be one reason why the Swedish governments continuous support to the Baltic states since their independence (from the Soviet Union) in the early 1990s.

During the cold war the Swedish governments continued with the policy of non-alignment to assure neutrality in a war. Even though everyone in Swedish society knew that in the event of another great war in Europe we would not be left untouched, and that that touch would come from the east. In recent years more and more previously secret information has been released or leaked about Sweden’s extensive cooperation with NATO during the cold war. Even during Olof Palme’s years as prime minister, who was widely criticised for being too close to Moscow.

The debate from 1990s until today

My own party, Liberalerna (The liberals), was the first Swedish party to actively and openly support Swedish membership in NATO. This was during the 1990s. After the soviet collapse the military threat against Sweden disappeared and governments from 1994 until 2014 cut the defence budget with ridiculous speed and amplitude. The threat was gone, so there was no need to join NATO, said the opponents to NATO. The advocates of membership argued that NATO was a guarantee for peace in Europe, just like the EU.

The debate continued like that during the whole 1990s and first half of 2000s. Only in 2007/2008 the debate started to change a bit with growing Russian ambition to enter the world stage once again. The invasion of Georgia did not have a great impact though. For a few months the intensity in the debate grew but the result was that this was a “one-time occasion”. However, the arguments changed during these years and from that point until today the arguments from us advocates for NATO membership have circled around Russia’s extensive rearmament, unpredictability (Ukraine) and ambitions. But also about our ridiculously weak defence and the strategic importance of our territory (especially un-garrisoned Gotland) in the event of escalation in Europe. There would literally be a racing for control of Gotland to deploy Russian Anti Air batteries (Iskander/S-500) to screen the Baltic states, or for NATO to prevent that deployment.

The opponent’s main argument now is that Swedish membership would provoke Russia too much and escalate the situation, and basically that NATO is a USA puppet and an evil imperialist tool. In recent years the debate and public opinion of NATO membership have tilted significantly towards support for membership. Five years ago a majority of the population supported neutrality but now the support for membership is as big or a couple of percentage above support for neutrality. The figure fluctuates from poll to poll. This is, in a Swedish perspective, huge shift. Of the parties in the parliament four (all liberal and conservative parties) now openly and actively support membership. The Greens, the Leftists, the Social Democrats and the far-right anti-immigration party Swedish Democrats still oppose membership.

The relation towards NATO

Sweden has a deep and good cooperation with NATO. We have been involved in Afghanistan, Balkan, Libya and other NATO operations. Including those ordered by the UN but conducted primarily by NATO. We might have a very small military in numbers, but the quality of much of our equipment and the training of our officers and soldiers is in absolute world class. The skill and training of the average Swedish infantryman is at the level of the finest units in the US Marines for example. “What we lack in numbers we make up in quality,” has been the Swedish doctrine for about 50 years. And even more so during the last 10-15 years. So the contribution in international operations and exercises is very often met with appreciation from NATO.

We try to work together with NATO in all aspects. With troops, officers training, exercises, operations, equipment evaluation, gender equality etcetera. Since Sweden has disarmed its forces so drastically since 1994, we need NATO to train our forces in large scale exercises because we don’t yet have that capability ourselves again. And NATO need us on their side for our strategic value and other reasons. Recently NATO gave Sweden, Finland, Georgia, Australia and Jordan the enhanced opportunities status. The newest and deepest form of relationship possible. During my visit to NATO HQ in may this year we were once again told that Sweden and Finland are in a class of their own. We are the closest non-allied partners to NATO. But the crucial part, membership (article 5), is yet to be acquired for us. You could compare to the relationship between Sweden and NATO as intensive and satisfactory foreplay that is starting to get a little embarrassing because it never develops into something else.

The last step before membership?

In early summer this year Sweden signed the Host Nation Support agreement with NATO. Allowing NATO troops to be stationed in or conduct/participate in exercises in Sweden more frequently, freely and with less obstructions than before. This is another major step towards membership, hopefully the last one. With public support for membership growing and with one of the two most likely government alternatives after the election in September 2018 being fully supportive to membership I believe that actual talk and parliamentary negotiations about membership will start around or shortly after the next election. My own guess is that Sweden will apply for membership sometime in the years 2021-2025. That would be the correct option, for the assurance of freedom, democracy and security not just for Sweden but for the Baltic states and the whole of Northern Europe.

Christoffer Karlsson is the defence spokesperson for IFLRY member organisation Liberal Youth of Sweden. He is a soldier, serving in the 71st battalion of the Swedish Army.