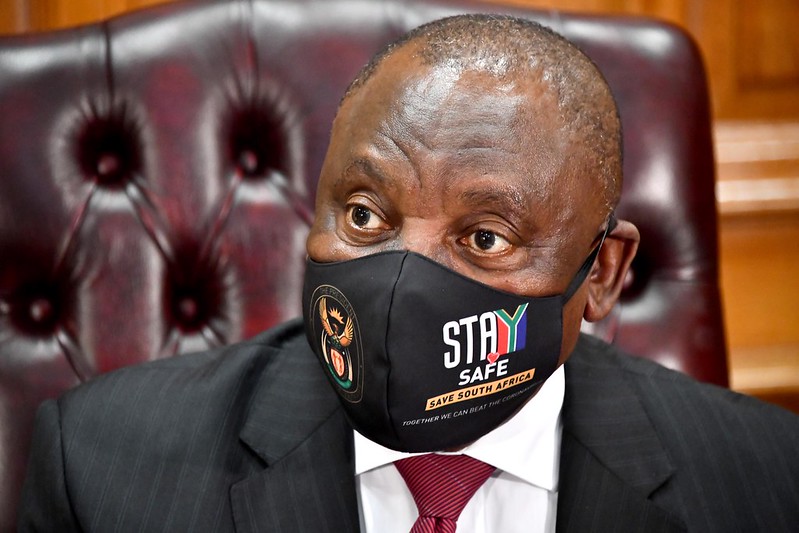 South Africa, a country well-known for its transformative Constitution that contains the ‘Bill of Rights’, which protects the rights of the people inside the country and succinctly defines the role and limited powers of public institutions and office-bearers is now in a whirlwind. In a seemingly justifiable step, the South African government put in place some of the strictest lockdown measures, with the aims to flatten the curve of the coronavirus and to buy itself time to build capacity for a health system that is in crisis, but which it has failed to do, as it’s now underprepared and at the cold face of coronavirus.

The dissatisfaction with the government’s strict measures takes off from what is interpreted as misguided regulatory interventions that were taken by the government, not taking a balanced approach to South Africa’s brutal inequalities, which are furthermore heightened by drastic measures that put the economy on a standstill.

With an unemployment rate of 30.1%, and the largest job losses in the first quarter of 2020 being recorded from the formal sector, it seems that the government keeps gambling with peoples livelihoods, when it earlier announced a nearly complete closing of its economy, and forced people in the country to stay home, and leave only for essential services.

Overnight, the reality was that exercise was not allowed, curfews to control movement of people were enforced, restaurants and fast-food chains halted, alcohol and cigarettes banned, funeral services limited to small numbers, and the government regulating clothes people can purchase and instilling fear in communities by dispersing the military to guard the streets.

These regulations created a very unhappy population, that was not only frustrated by being tied down, but started to feel the substantial impact on their livelihoods due to the economic cost of the lockdown regulations imposed. Government came to what seems to be the rescue, issuing out statements on a social and economic package relief of R500 billion, tax reliefs, temporary employer/employee relief schemes, grant loan schemes and extended financial support for small enterprises. The Reserve Bank’s cut repo rates to boost economic activities, the government provided  social packages, food parcels to be handed out, the Unemployment Insurance Fund accepted claims of over R1.8 billion rand, and a Solidarity Fund was established to assist vulnerable communities.

All these measures still do not balance the equation, as the government’s stringent policies further stress an economy that is in recession, and a population unable to live self-sufficient lives, but is rather now dependent on government support, that is now itself on life support as tax revenues have plummeted. South Africa being strapped in over 3 trillion rands of debt, it is probably time that it unchains people from their homes, curfews, travel bans, and completely open the economy with clear guidance for people to practice social distancing, rather than restricting them to a point of  government reliance for survival.

With South Africa now recorded globally as the country with the fifth highest COVID-19 cases, the general feeling is that hard government lockdown restrictions did not only put the country in a worse off economic crisis, but also that government did not use the lockdown to provide the health system with sufficient capacities to prepare for dealing with the virus.

Looking back to March, on an international stage, applause was given to the President of the Republic of South Africa, Cyril Ramaphosa, by the World Health Organisation for displaying exemplary wartime leadership to flatten the curve when he imposed  hard social and economic lockdown measures early on. This too was the general atmosphere amongst people in the country, as the nation clapped hands for what was initially described as a three-week long mitigation strategy.

The closing down of the economy was a choice made for citizens of South Africa by politicians masking this approach as a risk-adjusted strategy to choose lives over livelihoods. Vividly painted as a ‘momentary period’, it required South Africans to respect the call for humanity in order to reduce community infections, as the government positioned itself as the hero of the day in committing to provide the public health system with new capacities, which has been neglected by politicians for over 26 years. Also, embarrassingly, there is nothing to be proud of about finally having the political will to prioritise the provision of basic services such as water, electricity, shelter and sanitation for communities who been underserved since the dawn of democracy in 1994.

Many questions are left unanswered about the protection of basic human rights, as evictions are instituted by the government during a health pandemic. Worryingly so, with a President not taking press questions following his sombre announcements, the situation seems bleak for social and economic security. On the contrary, in the public domain, cabinet ministers proudly make utterances to the media that South African society would potentially be at a better social status, with a complete ban of alcohol after the pandemic. Such utterances, if left unchallenged as they are in ideation phase can be detrimental to South Africa’s democracy and rights of the people.

The President’s friends and foes from the business sector are in a tug of war with him, with the restrictions impeding on business profits and constituting violations of human rights pertaining to the freedoms of movement and association, which continuous to heavily hit profit, as the economy is suffering even under what is now termed as an eased lockdown.

Looking back, the reality of a national emergency was not only putting into effect the Disaster Management Act, which was followed by the establishment of the National Coronavirus Council “NCCC” with a conglomerate of 17 ministers selected by the President. They did not make up the entire national executive but nonetheless televised their special powers and are notoriously known for amending the Act and communicating as if they are generals in the media, , and centralising power that is impermissible under the National Disaster Management Act. The battleground for power through the NCCC has become one that has caused much fragility to the democracy of South Africa, and rights of the people, as Ministers on the NCCC acted without parliamentary oversight, as government decisions on responses to the coronavirus were not sufficiently scrutinised.

Instead, the NCC, which was established under by the Presidency, isolated itself from governance processes, and began a path of defying our liberties and freedoms by instituting regulatory measures that would see the discharge of our military to enforce measures to control and command people to remain in their houses. Freedom of movement is highly restricted. The new dawn that was promised to South Africans seems more like a government out of touch with reality and the ramifications on South Africa’s democracy will remain questionable over this pandemic, and the future.