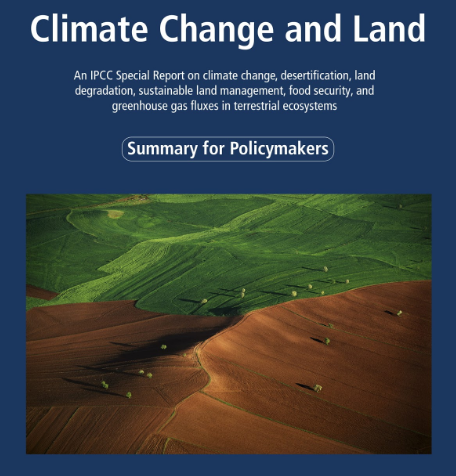 The report states that green areas caused by wetlands, eutrophication of water streams or intensive farming have grown while forests and harboreous areas have decreased as analysed by remote sensing. Copyright UE. Fair Use

The IPCC meets in Geneva to approve the final version of its special report on Climate Change and Land (SRCCL), a literature review on the relations between climate dynamics caused by human activities and land, soil and surface activities and analysing impacts, risks and measures related to it.

And although the SRCCL is, if anything, a scientific paper, subject to scientific discussion and criticism, one should clearly emphasize some points that are understated in the rapidness of newsmedia.

And the most important note is that capitalism actually poses solutions to climate change.

Yes. You have heard several times that capitalism is a savage system where companies look for their economic gains even if that produces disadvantages for society. For instance, it may be framed in something like this. Companies pack their products in plastic because it is more practical, therefore they do not care for environmental problems like loss of biodiversity or ecosystem damage. But this is wrong for two reasons.

Firstly, because it is in the nature of capitalism that by having such reckless economic behaviour, economic development would in the end be very much diminished to the responsible company/agent.  It is possible to go around saying that you are selling mysterious and beautiful rocks or sticks that cure people worst conditions and their most unbearable sufferings, but you should be aware that people like their money as much as you like receiving it.Simply put, if your company has a very bad record and image on environmental problems while producing say, some t-shirts, the case may be that consumers will be less prone to buying it if they have another choice. Consumers, as CEOs, are driven by trying to make better for themselves and the world and they like to be treated fairly. Let’s consider for example the case of Volkswagen’s emission scandal. According to the Financial Times, share prices in the Stock Exchange fell to a record four year low and stayed fragile due to the scandal until one year later. The company had to pay up to $18 billion compensation and reported a $4 billion loss in eight years.

The second reason is that no company is amoral. We can use them as scapegoats for problems we do not know well how to solve and fix. And this has been the case with many, not only companies, all over the world at different occasions, but the fact is the following: Companies are run by people and owned by people, and individuals wish to improve themselves and their environment. Indeed, it is what I would say a very strong fact that the bigger the company, the more ‘capitalist savage driven’ the company, the bigger are environmental commitments. And simply put, because environmental problems are actually economic opportunities. This is what for instance a recent study by a team of researchers as pointed out in northern brazil. Junior et al showed through modelling that the feasibility of windpower plants is most disturbed if investments are small i.e. the risks of no economic profit are greater if the investment is small.

What company would not like to have severely less costs in energy or water by installing their own solar power panels with energy accumulation and water treatment stations for water reuse? It is after all the decrease in costs of production that so famously have led industrialization. And even the most financial driven board would see the results!

Such measures are only possible for bigger companies due to their accumulation of capital and margin of profits. They can happily invest money in tackling these problems.

As the report itself states, there are synergies between high productivity practises and sustainable land management and there is a need for a dynamic financial/ banking system and capitalist accumulation to make upfront and long-term investments in these.

So, when someone says that it is due to the market that we speak of environmental problems and due to industrialization that we are threatening our extinction, promising a very fair and beautiful world where those are curbed and “harmonized” into an ideal world (where we for instance return to a pre-modern world), we should stop and intervene.

We should answer that as much as that may sound idyllic to some (think not of the extreme misogyny or homophobia of those ages) companies are as much interested in tackling their environmental impact or indeed harnessing the opportunities of less harmful alternatives to the environment than states or governments.

As the new issue of the Economist signals, “Market economies are the wells that produce the response climate change requires”.

And we all need to support companies to do better tomorrow.

Worth taking a look:

Tiago Dias is a graduate in Environmental Sciences from the University of Porto and the European Liberal Youth Individual Members’ Section delegate in 2019. He likes to read and write in his free time!