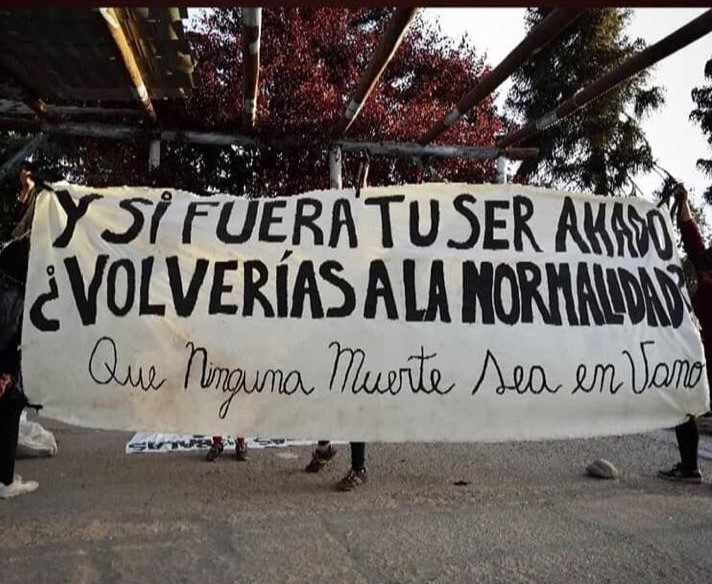 It was wonderful to see some Finnish snow again!

230 people injured and 26 dead- this is the tragic reality after more than one months of protests in Chile. Since the 14th of October thousands of young people have been demonstrating in Santiago de Chile, the capital of the state concerned. Not only in Chile but all over Latin and Central America rioting masses take over the streets demanding for change. Nonetheless, the protests which have been paralysing Chile for over a month rose unexpectedly- even for Chileans.

In comparison to other Latin American countries the economy of Chile is by far the strongest. Since the collapse of the dictatorship of Pinochet more than 30 years ago, the country was able to establish a neoliberal economic system that improved the conditions within the country. In 2019, the economy of Chile will possibly expand by close to 3% , the rate of inflation is at its lowest and the rate of unemployment shrinks as well. Despite this the people of Chile are protesting to change the system that benefited their country for the last 40 years- why?

Originally the protests were caused by a government mandated increase of ticket prices for public transportation by 3,75 % on the 14th of October. In the beginning high school students from Santiago began to call for fare dodging in the subway system of Santiago. As the protests maintained over several days the mood within society began to escalate. But the people of Chile are not only protesting for their right to take the bus. Injustice overshadows the economic growth of the last years. Minimum wage earners have to spend more than 20% of their monthly salary for transportation. It is true , the economy of Chile is growing, but not everyone is able to profit from it.

The Chilean population is dissatisfied with the increase of living costs, low wages and low pensions as well as a lacking health care system. “ The growth has not been the same for everyone since it multiplies economic, social and educational inequality” tells me Ignacia Espinosa Ilabaca, a 24 years old protestor. “ We are fed up by the abuse of the upper class and the injustice in this country. We want to change the system.” Public services are a big issue in Chile as many are privatized and not accessible for the lower classes of the Chilean population.

Another demand of the protestors is the resignation of Piñera and his politically right government. Political analyses reveal that only 28 % of the Chilean population agree with Piñera’s political agenda. The increase of ticket prices was just the tip of the iceberg. Even though Chile has been stable since the fall of Pinochet, the hopes of the population for equality in the society do not match the reality of many Chileans. “ The military dictatorship of Pinochet and the excessive privatization of public services can be blamed for the flaws of our country”, says Ignacia. The dictatorship of Pinochet ended 1990 , but to this day the constitution of Chile is the one that was established under his rule. For this reason voices rose during the latest protests to not only change the economic system but also to renew the constitution.

The protests are the strongest appearance of violence in Chile since the end of the Pinochet era. “ The situation within the protests is very violent because of the police. They overreact and are even more brutal to you when you are poor”. Most of the demonstrators are young citizens who are determined to reconstruct the economic and social system of their country. The motivation of Ignacia to protest is “to change the neoliberal system imposed on us so heavily” and “to achieve a resounding change of the neoliberal system, the pension and health care system.”

But will these demonstrations and violent riots really lead to a constructive reconstruction of the Chilean society? Or will this chaos only lead to as unstable circumstances as in other countries in Latin America? Demonstrators like Ignacia are convinced to be empowered to change their country, although the common understanding of how to construct the future of Chile is not clarified completely. The young protestors are determined to change the neoliberal system but yet not sure what they want to change it into.

Until now there is no answer of Piñera or his government to the protests or the violent confrontations between protestors and the police. Clear, is by the previous actions, that the majority of young Chileans is determined to stand up and fight for their beliefs. Only time will tell if their rising voices will be heard.