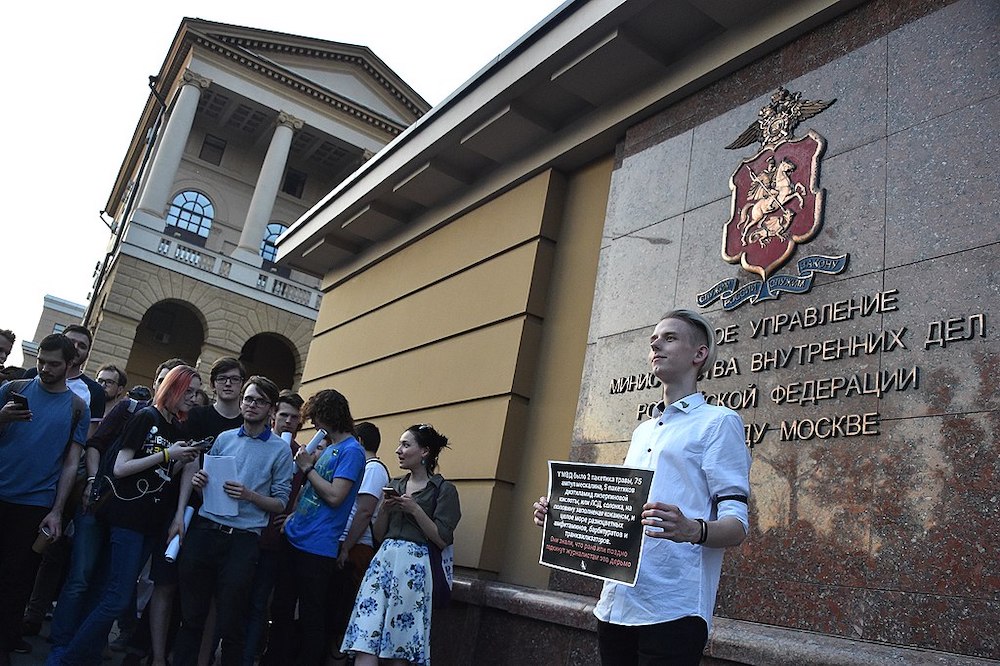 Recent events in Russia hint at an opportunity for a new political reality in the country. The release of investigative journalist Ivan Golunov a few weeks ago followed unprecedented though still somewhat small-scale protests. This sends a clear message to agents of change in Russia: nonviolent protest pays off – even in Russia.

Investigative journalist Ivan Golunov was set to be one of the 100.000 people imprisoned annually in Russia for drug-related charges. Police had allegedly found illegal drugs at his home and on his person, and suspected an intent to distribute. Although this accusation was already suspicious (as the drugs could have been planted), subsequent events revealed just how unlikely these charges were. Golunov was rejected access to an attorney for nearly a day, beaten in custody, and initially not allowed to provide samples of his fingernails for forensic analysis to establish that his hands had not been in contact with narcotics. The police distributed photographs supposedly taken in Golunov’s apartment showing what appear to be illegal substances and drug paraphernalia. However, it later was revealed that all but one of these photos were not in fact taken at the apartment. These photos were then quickly deleted – the official announcement of the Ministry of Internal Affairs now just reads “this news is cancelled.”

Prior to his arrest, Golunov had published articles on sensitive topics mostly relating to corruption. His investigations at independent online newspaper Meduza include a story on a Deputy Mayor of Moscow whose family business was performing auspiciously due to government contracts, a $20 million fountain restoration, and the role of corruption and organized crime in the funeral industry. The controversial nature of reporting on corruption in Russia, where every year several journalists die under mysterious circumstances, led many to believe that the charges on Golunov were politically motivated. The police’s blatant mishandling of the case further contributed to this perception.

Over the next days a massive impromptu campaign was launched, spearheaded by Golunov’s current employer Meduza. An uncommonly broad coalition of media and political organizations rallied against the journalist’s arrest. Three major business-oriented newspapers simultaneously printed ‘I am/We are Ivan Golunov’ on their front page as SPIEF, the largest Russian business event of the year, was ongoing. Such solidarity between media is new in Russia. The outpouring of support in Russian media got so overwhelmingly strong that even on the main state television channel Golunov’s case was shown before the usual item on the daily activities of the Russian President. On the street protestors gathered to form queues so that they could hold a sign for a one-man picket. This way of protest is the only form that is not strictly regulated under Russian law.

The unprecedented protest in media and on the street brought an unprecedented result. Initially, Golunov was granted the privilege of a house arrest. This was already deemed a victory by less hopeful commentators. Five days into his arrest Golunov was cleared of all charges due to a lack of evidence. Additionally, Chechen human rights activist Oyub Titiev, who had been imprisoned on similar charges, was released on parole. Titiev had been prosecuted a year before despite similar but smaller protests. While these releases were cause for celebration, the case has wider implications. The law under which Golunov was arrested will likely remain, although a working group in the Russian parliament announced that it would consider softening other narcotics laws. As such, activists continue to seek changes in the system that led to this arrest. There is less clemency from the government for those that seek to change the draconic system under which 100.000 are imprisoned every year, however. A day after Golunov was released a protest was held in Moscow where over 500 participants were detained. This is, however, almost business as usual in Russia, where prior approval from the state is mandatory for each public political gathering of more than 1 protestor. Large changes due to such protests still appear off-limits.

Though very limited in scope, the campaign for Golunov’s release did have a nearly immediate effect on an obvious injustice. Over the longer term the campaign may have inspired many to rethink their relation to the state. Golunov was not an activist nor an openly political character. In most countries, investing corruption would hardly be considered a political act. People have seen how the life of such a person may be destroyed anyway. Over time, this may feed into a further distrust of the Russian political and legal system. The case may thus boost further activism in Russia and should embolden those that believe that the causes they struggle for are broadly shared. Even if such campaigns have only small direct effects on state policy, this opportunity for piecemeal improvement sparks hope that Russian liberal democrats and human rights defenders can find new, innovative, ways to put pressure on a government that has long been left unchecked.

Damien Storimans is researching interactions between the government and youth movements in Russia for his MA in Russian and Eurasian Studies at Leiden University. Besides this, he is one of the Program Managers at the IFLRY Belarus & Ukraine program, a board member at D66 International Cooperation, and he is preparing for an MSc in Econometrics.