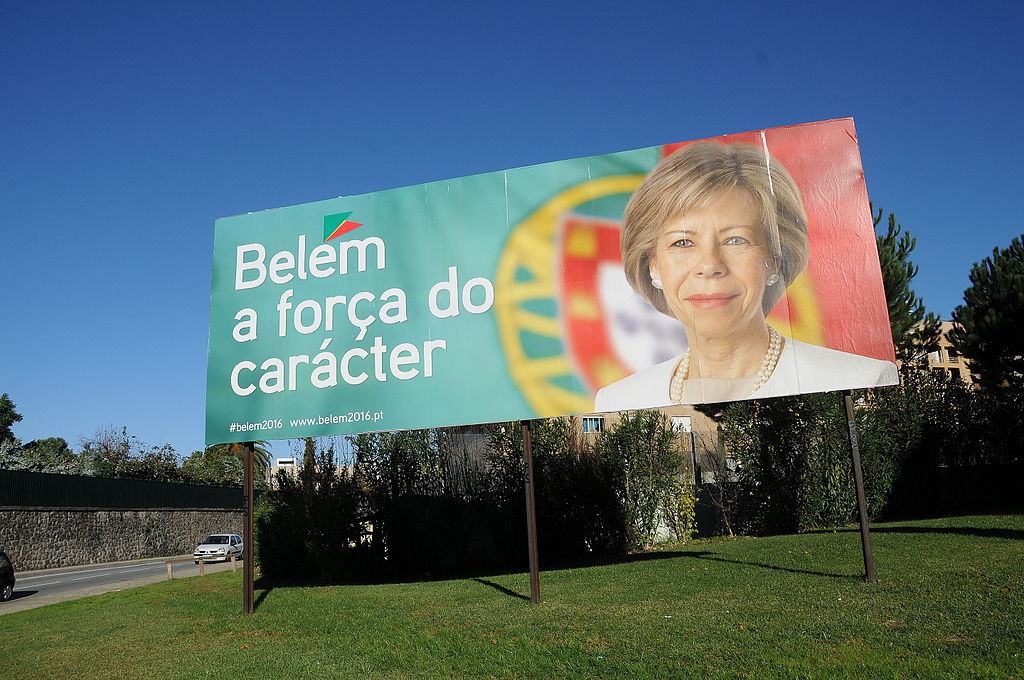 Billboard showing Maria Belém, one of the presidential candidates.

On the 24th January, Portuguese citizens will be going to the polls to elect the fifth democratically-elected president since the 1974 Carnation Revolution. These elections will mark not only the end of the second term of right-wing President Cavaco Silva, but also an important episode in the turbulent period Portugal is currently going through.

This article aims to provide a quick overview of the campaign period: it will touch upon the main issues that have dominated the presidential campaign of all ten candidates, as well as what a victory of each favourite would mean for Portugal and for its position within the European Union.

The campaign period for the 2016 presidential elections has been memorable, to say the least. It has had everything, from a communist ex-priest candidate (Edgar Silva), to one who divides his time between quoting Che Guevara and complaining about not having enough time to speak (Candido Ferreira), and another who slept alongside homeless people just to make a point (Tino de Rans).

It will also be remembered for a surge in some sort of strange Messiah Complex among a number of candidates. Sampaio da Nóvoa will apparently usher in the New Times, as a president fit for the culture of compromise that Portugal currently bears (a culture which does not exist, has not existed, and will not exist in the near future); MEP Marisa Matias has bravely stood up to the pharmaceutical lobby in the EU, received death threats and lived to tell us of her heroic actions, and Paulo de Morais has bravely denounced all politicians for being, in one way or another, corrupt.

Of the four remaining candidates, two (Marcelo Rebelo de Sousa and Maria de Belém) spend most of their time ripping off one candidate (Sampaio da Nóvoa) for being a career politician, and the last two (Henrique Neto and Jorge Sequeira) aren’t really given much time to speak.

In the midst of this madness, a number of issues have clearly marked the campaign. The issue of greatest importance has been the Parliamentary elections that took place in October (in which I ran as acandidate for Member of Parliament), which threw the country into weeks of political turmoil: while the pro-austerity right-wing coalition “Portugal à Frente” won the elections they very clearly lost the majority. After a few weeks of taking power, the Socialist Party (PS), with the backing of the Left Bloc (BE), the Portuguese Communist Party (PCP) and the Ecologist Party (PEV) rejected the government’s programme and formed a new left-wing government. While the Presidential elections are thus seen by some, in this particular case, as a ‘second-round’ of the Parliamentary elections, many candidates refuse such an interpretation.

Nonetheless, this political uncertainty has been an omnipresent theme throughout the campaign. One of the most commonly-asked questions during debates and interviews is whether the candidates would be capable of dissolving either the parliament or the government should the situation require it. While, as expected, the majority of the candidates have said they would work with the government, right-wing candidate Paulo de Morais, has stated that, had he been president, he would have dismissed ex-prime ministers Pedro Passos Coelho, José Socrates and Durão Barroso (the ex-President of the EU Commission) for not keeping their promises.

In addition, in light of the difficulties currently ailing Portuguese society, social issues have also been of concern. Candidates have discussed the re-introduction of the 35-hour working week, and whether this should be done only for public servants or also in the private sector. The reform of the National Health Service and the raising of the national minimum wage have also been very much on everyone’s minds.

From the perspective of liberal, secular politics, however, the most striking aspect of these elections is that many candidates, regardless of political affiliation, have in one way or another made a reference to religion. We’ve heard support for the values of the Vatican II council (Marcelo Rebelo de Sousa), as well as reiterations of support for the values of the Church (Sampaio da Nóvoa and Maria de Belém), and accusations that other candidates don’t represent the democratic Christian values as espoused by Pope Francis (Candido Ferreira). This is a worrying indication of the lack of secular thought and culture among Portugal’s political class, something which needs to be addressed.

While these elections might be interesting to watch from either an academic and/or comedic perspective, they are not going to represent a concerning break either with the past or with the European Union. The importance of the next President will be in the stability he can provide to the political scene, particularly in light of a fragile left-wing government. The favourite to win, university professor Marcelo Rebelo de Sousa, is also the most suited to provide this stability, as his political colour makes him a counter-balance to the Socialist government. The other favourites, left-wing Sampaio da Nóvoa and Maria de Belém, would not provide this balance, but they would also not likely take Portugal away from its current course.

Ultimately, the main candidates have expressed their support for honouring the agreements Portugal has with the EU, and of continuing on a path that is expressly European. In this respect, at least, we will see continuity in Portuguese politics for the near future.