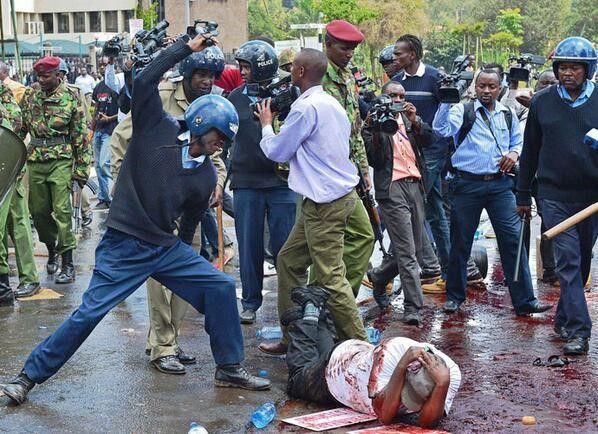 Suppressing protests by use of force does not attain peace but suppressed violence.

Truth is, the latter is more detrimental than the former. Contrary to the belief in the minds of many, peaceful demonstrations as a tool for passing a message to authority, an individual or a group of people, if properly employed, is a very effective way of communication geared towards the betterment of a society.

Peaceful demonstrators are groups of people organized to come together at a specific place and time to call attention to a specific issue. Demonstrations and laws governing the same differ from country to country. In Kenya, peaceful protesters often find themselves marching right into the teeth of police dogs, tear gas canisters, water canons and the nozzles of fire hoses in their quest for civil rights and human decency.

Article 37 of the Constitution of Kenya 2010, provides for freedom of assembly, demonstration, picketing and petition. Every person has the right, peaceably and unarmed, to assemble, to demonstrate, to picket and to present petitions to public authorities.

This excessive use of force to quell violence or disperse protesters does not only violate Kenyan law but also international guidelines on the use of force by law enforcement officials.

According to Human Rights Watch (HRW), On May 23 and June 6, 2016, in the Nyanza Region of Western Kenya, at least 5 people died and 60 wounded by gunfire as police tried to obstruct two protests.  Many of those injured were not participating in the protests and posed no lethal threat to security officials, according to numerous witnesses.

According to the statement by Human Rights Watch, Police officers shot live ammunition at and near those participating in the largely peaceful protests on both days. Uninvolved bystanders, students in school or on their way home, and people at work or in their homes were seriously injured or killed in situations where lethal force was unnecessary. A witness told Human Rights Watch that police shot a man coming out of a bank and took his money. A similar statement by Otsieno Namwaya, Africa researcher at Human Rights Watch, indicate that this happens because similar past incidences are not properly investigated. He went further to say that government need to investigate such incidences, make its findings public and see that justice is done – especially in the run up to elections in 2017.

When all is said and done, so little or nothing at all is actually done to bring these law enforcement officials to book. This often thwart the efforts of various human rights organizations and other friends of justice in their resolve  to see that justice is done to the victims of the heinous acts of violence by the police during protests.

The law in Kenya, is very swift and hell bent on punishing reformists disguised in peaceful demonstrators. But the irony is that, when it comes to disciplining police officers who deliberately injure or kill these protesters, the same law suddenly is taken ill and develops a very cold feet.  Kenyans have witnessed, in various occasions, the senior management of the law enforcement agencies publicly come to the defense of the officers involved in such acts. Charles Owino, the national police spokesman, once told the media that police shot demonstrators in self-defense and had no apologies to make. ‘’ Do not threaten the life of a police officer,’’ he said. “We have a responsibility to protect ourselves first as we protect the public and other police officers. ‘’  Now, whether or not this is in accordance with the law, is for you, the reader, to decipher.

From where I sit, I can confidently attest to the fact that if we do not  take appropriate action, Kenya could be dragged back to the dark days where former president Daniel Toroitich Arap Moi, of the then KANU regime, tried to suppress the opposition, civil society groups and individuals who fought to amend Kenya’s Constitution to incorporate basic rights. In the year 2010, Kenya promulgated a new constitution that made peaceful demonstrations legal. However, currently, utterances by police chiefs demonstrate complete disregard of the constitution as far as this issue is concerned.  Sadly, this could lead to the loss of strides made in the fight for reforms in our beloved country.

Belinder Frenny Odek is a graduate of Bsc. In Communication and Journalism from Moi University in Kenya. She is a pragmatic change maker who is interested in good governance, education, individual liberty, free markets and entrepreneurship as a tool for a peaceful, prosperous society. You can reach Belinder at odekbelinder@gmail.com.