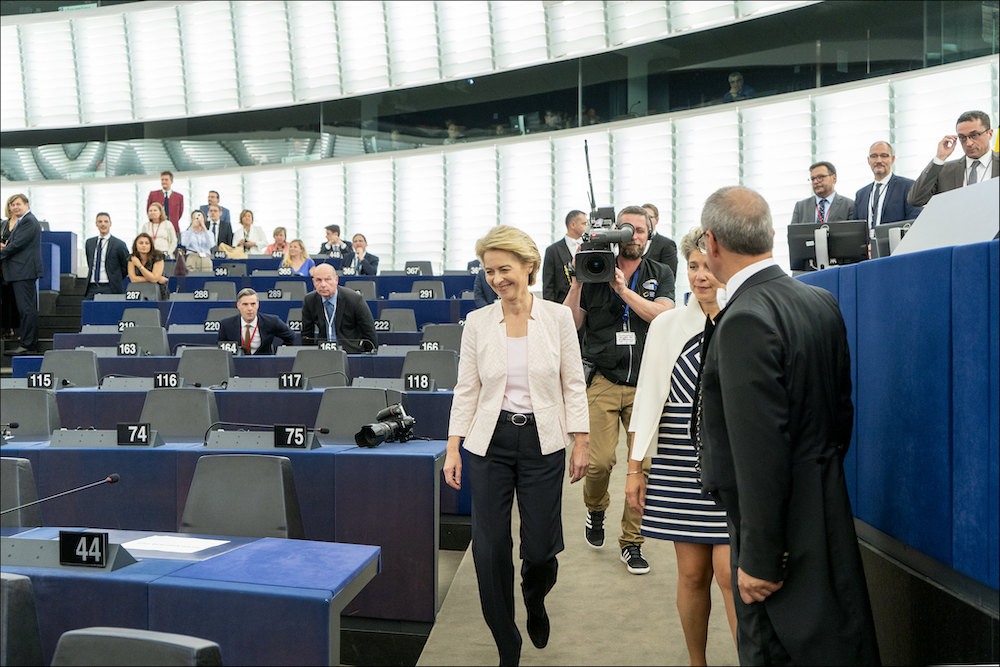 Von der Leyen just after she was elected President of the European Commission by the European Parliament. Source: https://www.flickr.com/photos/european_parliament/48308186106

On 1 December 2019, Ursula von der Leyen became the thirteenth President of the European Commission and the first woman to hold the role. Since then, things have only gone downhill. The time has come for her to step down. This is why.

Ursula von der Leyen’s problems in her current role are twofold. Firstly, she has utterly failed against one of the biggest existential threats the European Union has ever faced. The Covid-19 pandemic has brought the bloc to its knees and its impact may well be felt far more keenly and for far longer than the Eurozone Crises or even Brexit. Secondly, she seems to not understand the EU27 as individual countries. This has been ably demonstrated by her actions surrounding the Ireland-UK border – now an external EU border.

Von der Leyen is almost eighteen months into her tenure as Commissioner. To fully grasp why she should not remain in post for the remainder of her five-year term, it is important to look back at her time in domestic politics.

Born in Belgium to German parents, von der Leyen studied medicine in both Germany and the UK. In 2003, she was elected in the German state of Lower Saxony. She quickly rose through the ranks, becoming the Minister of Defence in 2013.

This is a Cabinet position, meaning that von der Leyen was directly answerable to Angela Merkel, the German Chancellor. It was during this time that she formed a reputation as a strong ally of Chancellor Merkel. As Merkel is such a towering pro-EU figure, this might well be why von der Leyen unexpectedly found herself in the running to become Commissioner in the summer of 2019.

Most commissioners steer the EU through choppy waters of some kind. Jose Manuel Barroso took the bloc through the Eurozone Crises. Jean-Claude Juncker led the bloc through the third economic collapse of Greece and Brexit. When von der Leyen took the reins, the challenge of completing the UK’s separation from the bloc loomed large. It was here that the first seeds of doubt in von der Leyen’s ability to lead were sown.

Once the UK finally left the EU on 31 January 2020, it became apparent that it was only the simpler part of the process that had been completed. Brussels was keen to avoid a Singapore-style haven of low taxes and poor protections on its doorstep. Westminster simply wanted to severe its remaining ties. The result was an internal customs border in the UK – one that is now causing tensions to spill over in Northern Ireland. Boris Johnson’s Westminster and von der Leyen’s Brussels bear equal responsibility for this mess.

But it is in Northern Ireland where von der Leyen made her most politically consequential mistake. In December 2020, the UK began its Covid-19 vaccination programme at a fever pitch. The end of the pandemic came into view. However, the EU was slower in approving any vaccine for general use – and has simply staggered from one mess to the next in the rollout and distribution phase.

Written into the post-Brexit trade deal between Westminster and Brussels is Article 16. In the event that the EU or the UK were ever to break key parts of the deal, either side could unilaterally trigger this clause. It allows a hard border to be temporarily created between Ireland and the UK should the EU’s Single Market or the UK’s internal market ever be compromised.

One key problem in the EU’s vaccination programme is actually obtaining doses. AstraZeneca, which has its European HQ in the UK, was failing to provide its promised doses to the EU. On 27 January, Ursula von der Leyen attempted to trigger Article 16 of the deal in order to keep doses within the EU and to slow exports leaving the UK.

Von der Leyen attempted to trigger Article 16 due to a dispute with a private company. The UK government had done no wrong. Crucially, she did not consult with Dublin before attempting to do this. On 29 January, von der Leyen backed down – but the damage was done. Dublin, Westminster and pro-EU voices across the EU27 were in uproar. The closing act of the pantomime is that many EU nations have since stopped using the AstraZeneca jab due to safety concerns.

The full scale of the damage to EU-UK relations is still becoming clear. In the medium-term, the Commission does appear to have papered over the cracks with Dublin. Quite who gave the final green light to Article 16 is still unclear. Von der Leyen’s move has hurt the relationship between Brussels and Westminster nonetheless. The relationship had already been badly damaged by the Brexit process; this may now have only been heightened going forward.

But von der Leyen had already struggled during the pandemic prior to this incident.

The pandemic has hammered the entire bloc. Italy, the Czech Republic, Belgium, France and Germany have been the hardest hit. Even those members that have managed to weather the very worst, like the Baltic States and Finland, have still taken huge economic hits. Italy, Spain and Greece looked to the EU for financial help. The bloc, with the Commission at the helm, was slow to respond. A direct consequence of that is that some people in Southern Italy are now struggling to find their next meal.

Key to this is that the Commission asked the bloc’s members to let the EU procure vaccines as one. This also included the three EEA states, as well as Moldova and Bosnia. As the rollout has gone from bad to worse, multiple members are now looking elsewhere. Denmark and Austria have signed a distribution deal with Israel – which has aced its own vaccination programme. Slovakia and Hungary are now using the Russian Sputnik V vaccine. Romania has begun providing doses to Moldova – which otherwise would not have had a single one.

The fact that multiple members that are not prone to rebellion are now going their own way speaks volumes. Brussels has lost control of this process. The EU’s image and reputation has taken a fresh beating.

Globally, there is a shortage of vaccines. But a large part of the EU’s problems do lie with von der Leyen.

Politicians the world over have been pushed far beyond their limits by Covid-19. Whoever was Commissioner was always going to find themselves tested. But von der Leyen has failed to rise to the moment. At some point, probably next spring, the pandemic will ease enough across the bloc to become manageable. At that point, the EU will have to start rebuilding. Given her track record as Commissioner, the person who leads that rebuild should not be Ursula von der Leyen.