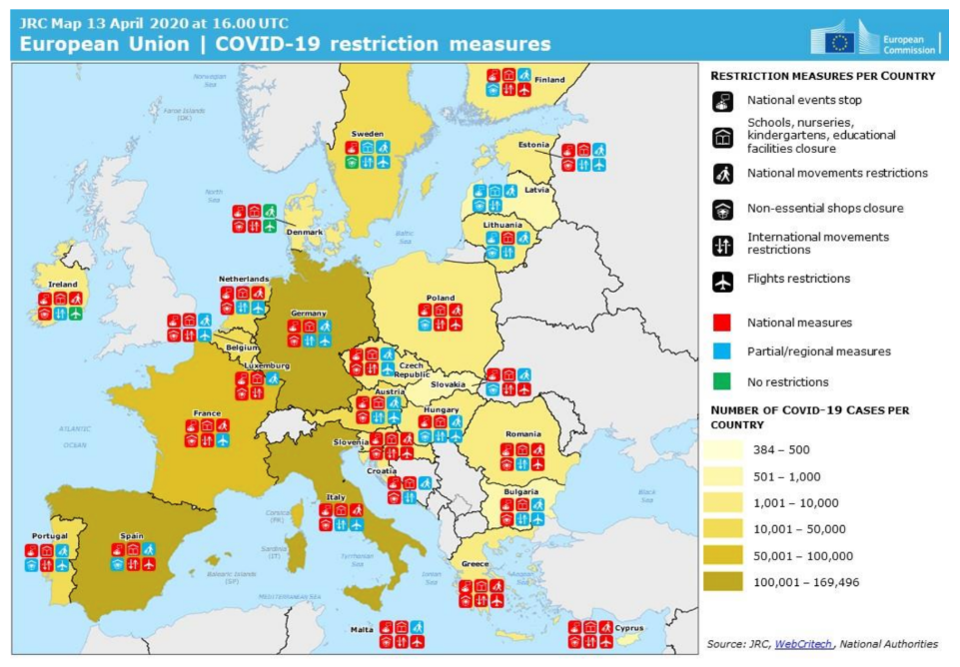 Over the past few weeks, a stark home truth has been laid bare across Europe: the Covid-19 pandemic is a public health issue with economic consequences — and it is an economic issue with public health consequences. It is this mash-up of crises that is setting the EU such an impossible problem: how can countries be unlocked without the virus spreading uninhibited?

Most of the EU27 appear to have now ridden out the worst of the virus. On 16 May, Slovenia even became the first member of the bloc to declare its epidemic over. The worldwide message in response to Covid-19 has been simple, clear and effective: flatten the curve. The more slowly the virus spreads, the more deaths can be prevented. Across the EU, this appears to have largely worked. Stringent lockdown measures in Italy, Spain, Germany and Denmark have prevented the absolute worst. Widespread adherence to governmental public health advice in Sweden, Ireland and Finland has also helped flatten the curve. But this has come at a high price: economies across the EU — and the world — have been hit hard.

Nowhere in the EU are the economic consequences of Covid-19 clearer than in Italy – home to some of the poorest regions of the bloc. In mid-May a BBC news crew travelled to Naples, one such poorer area. There, they spoke to people who have lost, or are likely to lose, their jobs and livelihoods. Some were even nearing financial ruin and possible homelessness as a result. As one woman told the crew, “we’ve risked everything to survive [the pandemic]. We already had nothing. They [the government] stopped us from working, they shut everything down. Now what’s left? To die of hunger?”

The only way to save poorer people, not just in Italy, but across the EU from the level of devastation seen in Naples is to unlock. But this is far more easily said than done.

Italy has begun unlocking, with some measures having now been eased. Italy had implemented one of the world’s strictest lockdowns, but, from 4 May, began to allow people back out to exercise and to gather in small family groupings. Public green spaces, factories and building sites reopened as Italy’s manual workforce began to return to their jobs. But, on 14 May, Italian authorities reported the highest number of daily deaths (two-hundred and sixty-two) seen in the country in more than a week. The easing of lockdown appears to have led to a rise in the R-number in Italy.

The R-number (effective reproduction number) is the number of people an infected person will pass the virus on to. If the R-number is above 1, then it is classed as an active epidemic. The lockdowns mean that, across the EU, the R-number is falling below 1 — and is even starting to bottom out in some countries, like Greece and Croatia.

The R-number is also causing concern in Germany. Beginning on 6 May, Germany allowed some public venues, such as museums, and almost all shops to reopen. Schools also began gradually reopening in a phased way. But then the R-number started to rise.

In the three days after the lockdown was eased, Germany’s R-number rose above 1 — and, at the time of writing (17 May), it is still there. Berlin is mulling over slamming on the “emergency brakes” by reinstating the lockdown measures in full.

Germany is one of the countries that is widely regarded as having handled the virus well. It has recorded a huge number of cases, but, through an early lockdown and by shielding vulnerable members of society, it has had remarkably few deaths: 8027 deaths from a total of 176,450 confirmed cases as of 17 May. But, as things stand, the evidence suggests that the German unlocking is causing a spike. It is Germany, in particular, that should be of concern to Brussels.

The German economy is one of the largest in the world. It is well-developed and diverse. A strong Germany will be crucial to the post-pandemic recovery of the bloc, just as it was in delivering bailouts during the Eurozone crisis. In all probability, a large chunk of the money required for Brussels’s post-pandemic recovery loans scheme will come from Germany, just as a sizeable chunk of the bailouts handed out a decade ago did.

Put bluntly, a weaker Germany would probably be hard pressed to justify leading the loan scheme to the German people. Without German support, the loan scheme might well struggle to deliver what is likely to be asked of it. Without a robust, able loan scheme in place, the socio-economic devastation documented by the BBC in Naples might well be repeated among the bloc’s less economically-resilient members.

But Brussels is now helping to work towards a solution to the unlocking dilemma. On 4 May, the Commission announced that it had drawn up a €7.4billion fund to help develop an effective antibody test and, more pressingly, a vaccine against Covid-19. On 8 May, the Commission began to organise the distribution of face masks it has bought for healthcare workers across the EU27. On 12 May, Brussels announced an additional €117million pot in order to help member states test as many people as possible. The day after that, the Commission published guidance on how tourism could safely resume this year — some members, like Spain, Greece and Croatia, are heavily reliant on their tourism industries. These announcements comprise a broad, far-reaching package of measures and pledges. Brussels has sprung into action. In less than a fortnight, it has gone from apparent inaction to beginning to coordinate a bloc-wide response to this crisis. But it may be too little too late.

The perceived inaction of the EU is now giving Brussels another major headache: the pandemic is battering public trust in the union. Majorities of Austrians (51%), Greeks (52%), Slovaks (53%), Croatians (56%), Italians (59%) and Czechs (62%) either disapprove of or are ambivalent towards the EU. Recent pan-bloc opinion polling suggests that approval of the EU has fallen across all twenty-seven member states — even in the most ardently pro-union members, like Ireland and Luxembourg. There are even warnings that the crisis could well cause Italy to follow the UK through the exit door.

But these are unusual, hectic times. We are in the midst of a global crisis. The situation is changing almost by the day the world over. At the beginning of May, the main priority in the EU and the world was to develop a vaccine as quickly as possible. Now, stopping, or at least minimising, socio-economic plight, has become just as important in the EU. If the EU is loud and clear about the measures that it is now putting in place, then it may be able to turn the tide of public opinion. If it can, then the Covid-19 pandemic could ultimately be held up as a time when Brussels eventually got it right. If it does not, then it may well be risking the very future of the union itself. Covid-19 is a unique crisis in modern times in that it is merging various forms of crises. Brussels is now finding that out the hard way.