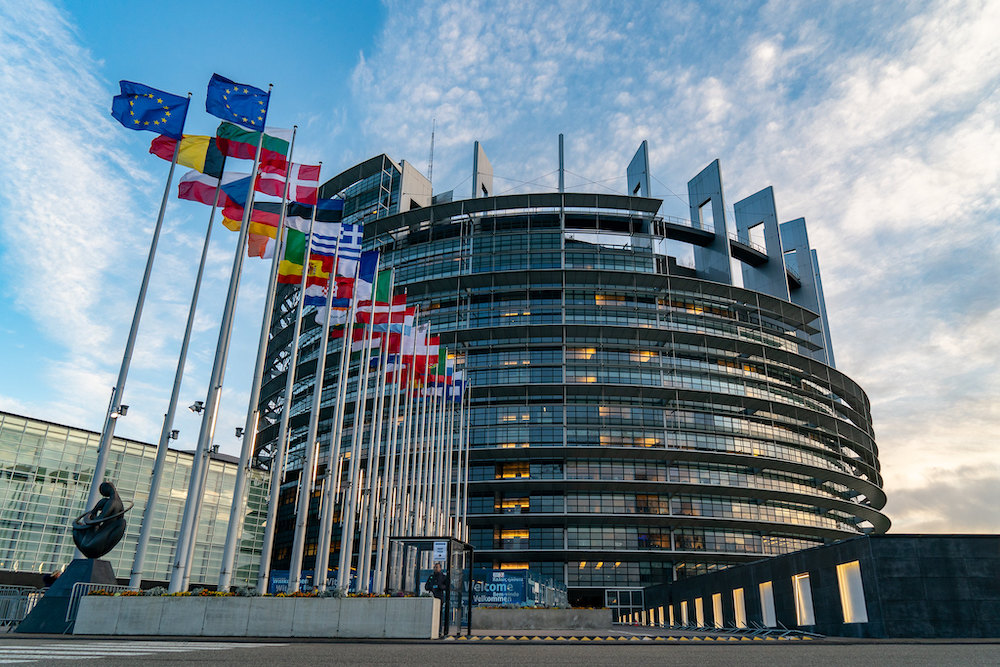 Flags in front of the EU Parliament in Strasbourg Source: https://www.flickr.com/photos/european_parliament/49517029202

The pandemic does now appear to be easing across the EU. Across most of the twenty-seven, infection and death rates are dropping. But amidst a current surge in Turkey, the EU is reminded of just how close it is to a perilous third wave. But with the UK to the west and Israel to the east now causing serious headaches, the question must be asked: is the EU’s next crisis beginning to take shape?

On 29 April, there was cause for celebration in both Brussels and Berlin. On that day, Germany administered 1.1milllion Covid-19 vaccines. More than one-in-one-hundred Germans received a dose that day. The moment was hailed as a win for the EU’s vaccine rollout. Given how very publicly it has gone extremely wrong thus far, Germany’s achievement was an important political win for the EU. On 14 May, Germany broke its own record, administering 1.35million doses in a single day.

Across the bloc, the vaccine rollout is gathering steam in the countries that have been worst-hit by the virus. Germany, Spain, Belgium, Italy and the Czech Republic are all now vaccinating at pace. Romania, which suffered a devastating second wave, is now beginning to pick up the pace too, as well as providing vaccine doses to neighbouring Moldova.

Perhaps it is the situation in Turkey that is making the EU27 pick up the pace. Given that Istanbul, home to roughly fifteen million people, is not too far from the borders with Greece and Bulgaria, the possibility of spillover is realistic. The tourism-dependant Greek economy is also looking to reopen to visitors as soon as possible, adding to the potential for a third wave – at least in the Balkans.

On 29 April, amidst surging infection numbers in the key cities of Istanbul, Ankara and Gaziantep, the Turkish government put the country into lockdown for the first time. Now that infections seem to have levelled off below ten thousand per day, Ankara is keen to reopen the country. Some experts fear, however, that it is still too soon, and that this could lead to another surge. Turkey might not be in the EU, but its two borders with the EU are frequently crossed. Similarly, many people from the EU visit Turkey, particularly Istanbul and Cappadocia, for holidays. The virus can easily be taken home by tourists. This was tragically proven by skiing tourists taking the virus home from Northern Italy as the pandemic took hold last year.

The problem with Turkey is an epidemiological one. The same cannot be said of the other two doorstep crises. To the west, post-Brexit Britain is continuing to cause problems.

On 30 April, the UK and Norway failed to strike a post-Brexit fishing deal, locking British boats out of Norwegian waters and Norwegian boats out of British waters. Norway, whilst closely tied to the EU and somewhat integrated into it, is not one of the twenty-seven. This means that Norway is outside of the Common Fisheries Policy, which opens up the EU’s territorial waters to boats from anywhere in the bloc. Oslo is free to grant and deny access to its waters as it sees fit.

The main cause of the failure in talks was cod. The UK wanted to be able to catch so much cod that there would have been precious little left for anyone else. Norway has strong environmental regulations governing its fisheries. These include conservation targets. Given the sheer amount that the UK reportedly wanted to be able to catch, this would have almost reached those targets. Understandably, Oslo said no. This was a drop in the ocean compared to the UK’s next clash with the EU.

Jersey, the largest of the Channel Islands, is self-governing. The UK provides defence and foreign representation. All other aspects of governance are left up to the Bailiwick of Jersey.

By the end of April, Jersey had failed to strike a fishing deal with France. As a result, French boats were locked out of Jersian waters, beginning on 1 May.

Fishing is the lifeblood of many small communities along the coast of Northern France. Unsurprisingly, things soon began to get ugly. On 4 May, Annick Girardin, the politician in charge of France’s fisheries, warned that Paris could cut off electricity to the island if French boats were not allowed to fish. Roughly 95% of Jersey’s electricity comes from France, so Girardin’s remarks were met with international outrage.

Later that day, French fishing boats illegally entered Jersian waters and blocked the harbour of St Helier – the largest town on Jersey and the arrival point for most of its goods. In response, two Royal Navy vessels arrived in Jersian waters on 5 May. In the end, the assembled French boats left Jersey later that day. At the time of writing (22 May), the situation is still unresolved.

As the Channel Islands became the scene of the ugliest spat between Westminster and Paris in decades, things to the east also began to quickly deteriorate.

On 6 May, Israeli authorities begin to evict several families in the Sheikh Jarrah neighbourhood of East Jerusalem. Soon, violent clashes erupted between Israeli police and Palestinian protesters at the Temple Mount complex. Tear gas, rubber bullets and stun grenades were all fired by police at Palestinians, some of whom were sheltering inside the al-Aqsa Mosque – one of the holiest sites in Islam.

Things spiralled further on 10 May when rockets were fired from Gaza into Israel. Israel responded in kind. After eleven days of fighting, a ceasefire brokered by Egypt came into force. Nevertheless, hundreds of people have been killed and much of Gaza City lies in ruins.

Beyond the destruction in Israel and Gaza, the conflict leaves uncomfortable questions for the EU. Israel is one of the bloc’s most important partners. It is a hub of science and technology, which is why it participates in Horizon 2020. Israel also enjoys strong ties with many members of the bloc, particularly the Czech Republic, Hungary and Greece. This brings home an uncomfortable reality for the EU.

When Russia invaded Ukraine, the EU sanctioned it. When the Belarusian government began to detain pro-democracy protesters, the EU sanctioned it. It is unable to do the same to Israel. Jerusalem has put together a wall of close allies in Prague, Athens and, in particular, Budapest. Any EU-wide moves to sanction Israel in any way would be met with opposition here. Compounding this is the fact that Berlin is still loathe to criticise the Israeli government in any way, shape or form. Should the Israel-Palestine conflict escalate again, the stage could be set for a spectacular internal clash in the EU.

The EU has just weathered what is perhaps the greatest storm it has ever faced: Covid-19. It initially botched the rollout of vaccines, but is now catching up with the likes of the US and the UK. But with an increasingly belligerent Westminster at its doorstep and an emboldened Netanyahu-led government in Jerusalem that would be difficult to sanction, the EU’s next crisis might just be coming over the hill.