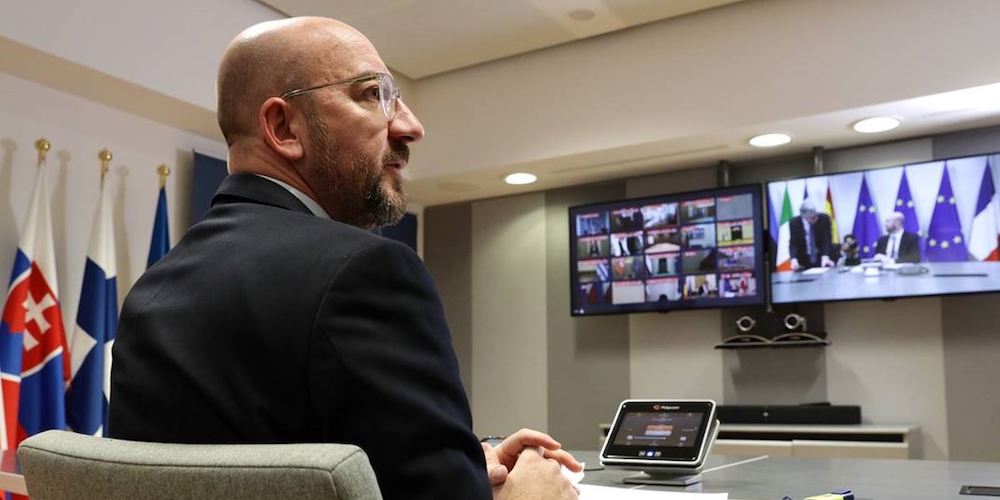 Belgian premier Charles Michel in a video conference of EU heads of state.

On 31 January 2020, the UK left the EU – bringing the tumultuous three-and-a-half year process to an end. As the EU prepared to begin negotiating a new UK-EU trade deal, it was also hoping for a period of recalibration. The UK had long been the bloc’s “awkward” member and, with the new Commissioner Ursula von der Leyen seemingly keen on reform, Brussels appeared to have the perfect opportunity to reshape and renew the EU27. Then, along came the coronavirus – COVID-19.

When COVID-19 was first reported in December 2019, few paid attention. Even when it began to spread across South-East Asia, few paid attention. When the first EU case was reported in France on 24 January 2020, it was linked to China and was seen as being an unfortunate anomaly. Now, at the time of writing in late-March 2020, the Schengen Area (twenty-six EU member states, the three EEA states, Switzerland and the remaining four microstates) is the epicentre of the virus. Italy has the most COVID-19 deaths of any country in the world and the most infections anywhere in Europe. Spain, Germany and France are also seeing their rates of infection and numbers of dead skyrocket.

Freedom of movement is a cornerstone of the EU – central to this is the Schengen Agreement. When it came into force on 26 March 1995, it removed all internal border checks within the zone. By the date of the zone’s twenty-fifth anniversary, it had been de facto suspended. Almost all countries across the zone are heavily restricting travel or have closed their borders entirely. Poland, the Czech Republic and Malta are even making it difficult for their own citizens to enter the country.

The EU has been seen as slow to act in the face of what is both a public health and a political crisis. On 17 March, as countries across the Schengen zone closed their borders, von der Leyen announced that the EU and non-EU Schengen countries as a whole would close their external borders for 30 days. But there were some caveats: returning EU and Schengen citizens would be allowed in, as would non-EU and Schengen citizens who could prove residency and – most worryingly for some national governments – those who were related to someone resident in the EU or a Schengen country would be allowed in. For example, this means that, on paper, someone from a hard-hit area of the United States would be allowed into the EU through Ireland, provided they could prove that they have a close relative resident in Ireland.

The aim of the Commission with this proposal was to create a protective bubble around Europe – but the fact that most member states have only increased their border restrictions since the declaration shows just how unconvinced many governments are by von der Leyen’s collective measure. Critics of the EU have been quick to point out that the EU’s response is too little too late and have compared it to the EU’s flawed responses to the Eurozone and Migrant Crises.

Despite the criticisms, EU members have taken it upon themselves to show European solidarity. Germany – which is badly hit by the virus but managing its victims well – is treating patients from Italy – one of the worst-hit countries in the world. France, Germany and Italy are sharing ventilators, getting them to those most in need as quickly as possible. Italy is also sharing information on its mistakes in dealing with the virus with other EU members. This is true European solidarity at a dark moment for the EU – and the world.

But, for now, the EU is paralysed by the virus. All hopes for a time of recalibration are gone. Perhaps, most worryingly for Brussels, the EU institutions are getting almost no airtime during this crisis. Ursula von der Leyen is in a prime position to take charge of this situation – yet she appears unable to break into any media coverage at all.

The last time the EU really had a media presence in this crisis was on 19 March. The European Central Bank announced a €750billion stimulus package for the purchasing of any outstanding assets that member states may struggle to pay as a result of the virus. The EU cannot risk another Eurozone crisis at this time. But perhaps the lack of EU involvement is deliberate.

One longstanding criticism of the EU – and a particularly strong factor in the Brexit vote – was the fact that Brussels is often seen as overreaching into the internal affairs of member states. Perhaps a judgment call has been made somewhere within the EU that it is up to each individual member state to decide how to respond to the crisis. It is a huge gamble either way: tell member states how to collectively respond and risk being accused of totalitarianism – or do nothing and risk being accused of inaction.

The decisions taken by Ursula von der Leyen and other senior EU officials have not been easy so far. No sooner had they enacted Brexit then the world was plunged into a pandemic. But the EU has faced unexpected crises before – and will again. Its response now is crucial. Hard choices have been made thus far – and they are not about to get any easier. The EU, its members and its closely-associated states are in this for the long-haul – whether they like it or not.

Luke Sandford is from South-East England and extensively campaigned for a people’s vote on Brexit during his years studying for his undergraduate degree at Goldsmiths College, Univeristy of London. He now lives in Sweden where he studies European Studies at Lund Univeristy. His Swedish is middling; his journalistic skills are better.