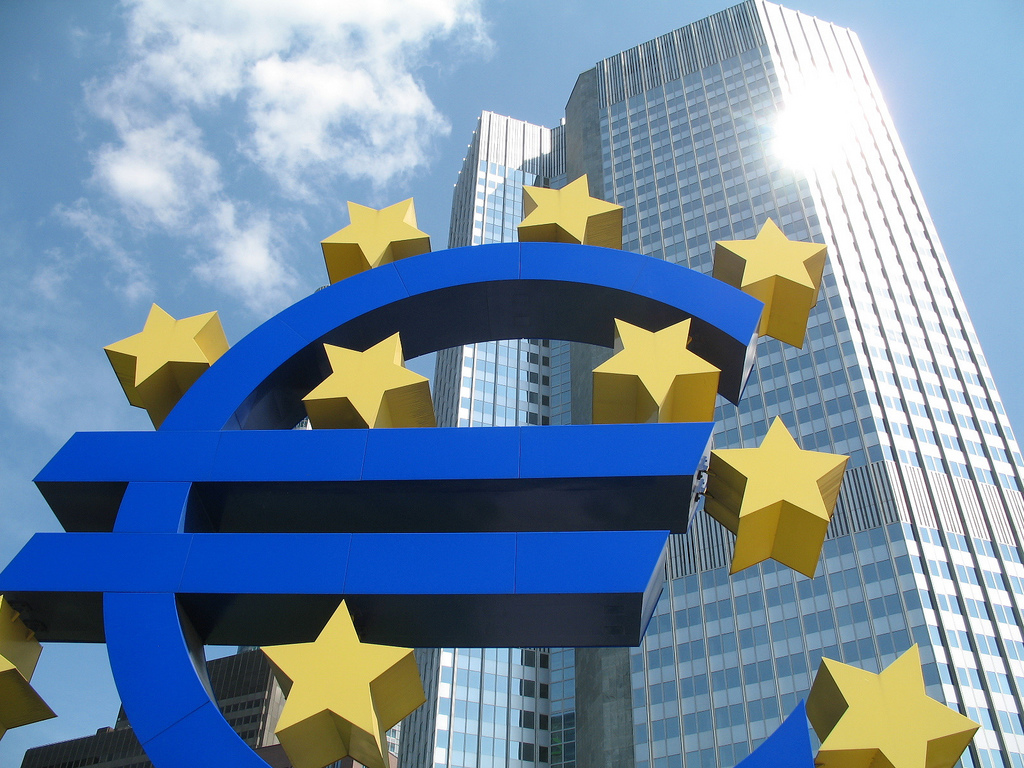 All too often I see Northern European liberals and conservatives blaming the people of Southern European states such as Greece for their current economic misery, and suggesting that if Greece lowered wages enough and deregulated enough, economic recovery would be swift. Although this attitude is in part correct, the reasoning behind it amongst sways of politicians shows a terrifying lack of knowledge of not only this crisis in particular, but economics in general. This article will walk through why the Euro is where it is, and what it needs to do to change.

When the Euro was entered each member nation saw their wages and prices converted into a new unit. Some nations saw their wages and prices being overvalued in the new currency relative the rest of the union. The overpricing of Greek currency was exceptional, while the D-mark was overvalued although less substantially so. Hence, the Greek and German economies overnight lost competitiveness internationally as their wages in foreign currency rose. Both saw net exports fall, relative to what would have been the case without the Euro. The opposite was experienced by most Northern European states (as most of them saw their currency undervalued relative the unions average).

Many don’t remember that Germany back in the early 2000s was viewed as the sick man of Europe, had very poor export figures and poor growth. Something which largely could be attributed to the overvaluation of the German currency. Perhaps not surprisingly the hegemonic “Ordo-Liberalism” of Germany intuitively sought to readjust this peg through having low internal price growth in Germany vis-à-vis the rest of the Union. This is an economically painful process, but it saved Germany from the catastrophic consequences seen in the PIGS (Portugal, Italy, Greece and Spain) post-2010.

The government of Greece, did notoriously not try to lower prices but rather filled the GDP black-hole caused by low exports with deficit spending. Moreover, the reckless corruption of Greek politicians caused them to increase deficits well beyond what would have been necessary to cover the hole in the economy which the poor trade caused. This big stimulus to the economy drove up inflation, making Greek prices even higher (by conservative estimates Greek prices were 40% too high). When the Greek government in 2010 could no longer fil this gap with borrowed money, this overvaluation caused a massive economic collapse. Unemployment rose towards well above 25% and the economy entered a depression which is still gripping Greece.

To make things worse there was no common European safe bond – a common bond issued by the Euro states. This bond can either be tied to a common Euro state budget or (more viably) be a cross section of national bonds. I.e. a European safe bond would be a bond made up by combining each individual state’s government bond into one, so the money put into this bond is proportionally distributed amongst the Euro states. This structure can be divided into tranches by the ECB, where the prime bonds of this structure would be virtually risk free. The lack of a European safe bond caused the absolute absurdity of the ECB being unable to recommend a common European asset for banks to put their money in safely in turbulent times. As a result, more capital fled the PIGS for German bonds, than would otherwise have been the case. Rendering the ECB unable to create and control a suitable single interest rate for the entire union. This restricted the ECB’s freedom of manoeuvre, forcing it to watch as Greece in a time of depression saw interest rates hike, destroying whatever little chance of recovery there was.

The enacted solution to the Greek conundrum has been to force Greece to adapt deflationary and contractionary policies, in other words cutting spending, increasing taxes and pushing down Greek wages nominally (which leads to deflation and output contraction). Forcing the Greek economy to contract into deflation like this is the most devastating European economic decision, probably in modern times. The rational behind this policy is that the only way to boost the Greek economy was to boost demand for Greek produce in trade, which required Greek deflationary pressure to push down wages. But deflation in turn increases the real value of Greek debt, which depresses domestic demand. It would be able to overcome this by changing its exchange rate, but because of the Euro it doesn’t have the ability to do so.

The effect of this policy has been a skyrocketing debt to GDP ratio and collapsing employment. Causing permanent damage to the Greek economy. Indeed, the troika forced Greece into a policy of saving which is causing the Greek debt to spiral out of control, a phenomenon known as the paradox of thrift. As Amartya Sen, Professor of Economics and Philosophy at Harvard University put it: the 3rd Greek Bailout was the first ever loan issued whose conditions make it impossible to pay it back.

The knowledge that Greece would never be able to repay the loans to other Euro states have put Northern European politicians in an awkward position as their constituents don’t want to feel as though they are loosing money to Greece. This has caused political pressure on politicians to dump their Greek debt on someone else, i.e. the European Central Bank. Hence, the ECB has been buying more and more worthless debt with printed money. At the moment this is not an issue, but if the trend continues we risk seeing the ECB sitting on worthless assets and huge liabilities. In other words, the ECB’s ability to stop future spiralling inflation, would be highly limited as it can’t buy back all that money it printed to buy Greek debt with the Greek debt it now owns.

The fiscally prudent states of Ireland and Spain, who’s debt skyrocketed because of necessary bank bail-outs in 2009 and 2012 respectively, became seen as risky states. The ease of capital flow within the Eurozone meant that large amounts of capital began to flow from these states into German bonds, larger than would have been possible without the Euro. Hence, making recovery much tougher than would have been the case without the Euro. Moreover, just like Greece they saw that any change in government spending had a huge impact on their GDP, especially in nominal terms, which made it very painful for these states to make fiscal cuts.

So who are the winners of the Euro? The northern states, particularly Germany. They have enjoyed undervalued currencies and a huge influx of capital from the southern states. The combination of which is why we are seeing fantastic recovery there and a German unemployment rate not seen since before unification. Just the effect on the German governments cost of payment on bonds due to the influx of capital from the south during the crisis has saved the German state more money then they have spent on loans to Greece. Ironically, what in part is driving Northern European economic activity is the collapse of the southern economies.

All working currency areas have a redistribution mechanism from trade surplus nations to trade deficit nations and a common safe asset. If a redistribution mechanism does not exist, the differences in inflationary pressures (which can in no realistic way be harmonised) around the union will inevitably severely damage some member states’ trade balance, just like happened in Greece. This puts member states that have large amounts of debt in a completely impossible situation, where they have to choose between either collapsing trade or a huge increase in their (by that time already excessive) debt. If there is no common safe asset, capital will condense into the “safest” Euro-zone nations at every crisis, much more than is the case with a common safe asset. As capital runs for regional safe papers rather than stay union wide, through a union wide paper. This causes the worst hit regions of the union to be further damaged as they see their interest rates rise and investment disappearing, relative what would be the case with a common safe asset. Without these mechanisms a currency union can most likely never be stable, and indeed the Euro lacks both these fundamental mechanisms.

This issue was known by the founders of the Euro, but introducing a fiscal union and common bond was politically impossible. Instead Jacques Delors (president of the European Commission at the time of the creation of the Euro in 1992) and others reasoned that a crisis of the Euro would inevitable come, at which point these reforms would have to be implemented. Unfortunately, Delors has been wrong in this assertion.