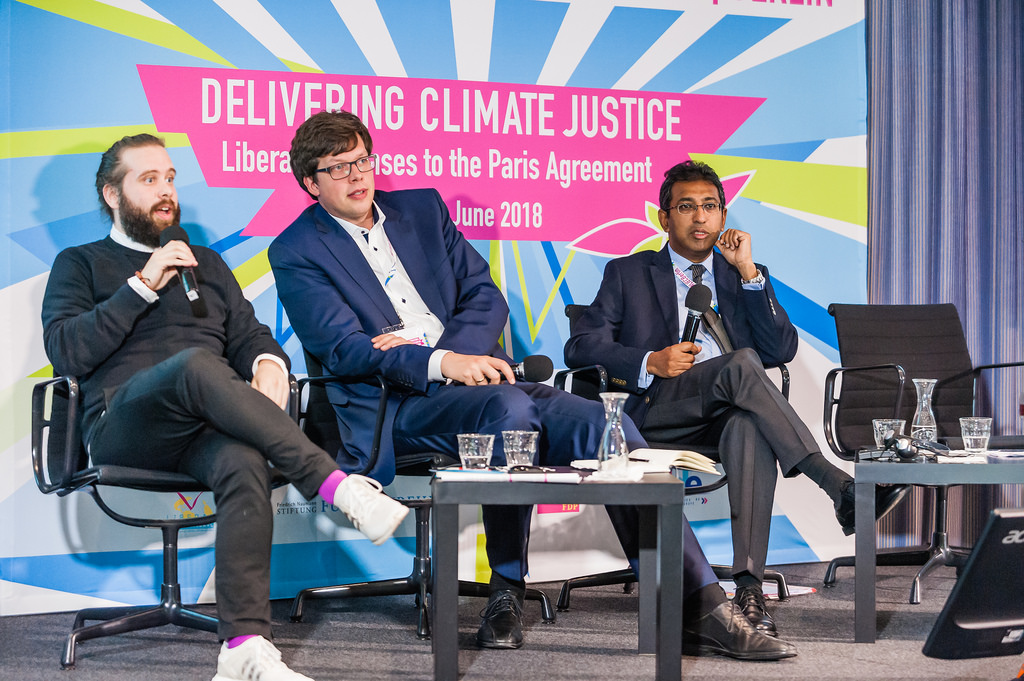 Liberal International organised its 200th Executive Committee in Berlin on June 22nd – 24th. The theme of the event was “Delivering Climate Justice: Liberal Responses to the Paris Agreement”. The IFLRY Climate Change Programme members are deeply grateful for the opportunity to organise a fringe on this topic on June 23rd. The aim of the fringe was to inspire Liberal International’s Member Organisations (MOs) to take leadership in combating climate change in their respective countries, and to involve young people in that process. It was organised in characteristic IFLRY style: an interactive workshop! The participants contributed to three topics: ‘including youth’, ‘liberal responses to the Paris Agreement and climate change’, and ‘combating climate change at home’. Next follows a short summary of best practices and outcomes according to the three topics.

This group focused on the question of how young people are being included in their respective MOs and how young people are advocating the protection of our climate in the participants’ countries. Participants especially emphasised the need to harness the potential of the young generation and its connectedness whilst taking into account changing mobility needs and time constraints. Besides discussing more general ideas of the importance of including young people in, as well as facilitating their access to, decision-making processes in the MOs, there were also concrete proposals brought forward about how to use the youth’s potential in fighting climate change. Particularly realising innovative ideas (such as inter-generational picnics, biking tours, digital campaigns) to raise awareness, as well as the regular exchange with non-governmental actors were underlined in this context. In addition to that, throughout the discussions it became obvious that there is a greater need for the inclusion of the young people in party structures as well as the importance of special representatives advocating this generation’s interests. The message is clear: as climate change is also a matter of generational justice, it up to us now to take over the helm and change current policies for the better.

Group 2 – Liberal Responses to the Paris Agreement and Climate Change

In the second group, the participants were challenged on what are the liberal responses to the Paris Agreement and to climate change in general. We asked them to share best practices from their parties and countries, and to focus on what are the good, liberal solutions other members of their community could make use of at home to achieve ambitious targets. Several of the participants highlighted the need for individual responsibility. However, they also discussed how a government could incentivise this. For liberal responses, incentives may be a key component. As liberals we don’t want to prohibit everything we don’t like, and thus we need to be creative and find other ways to ensure that we move towards the targets of the Paris Agreement. To do this, it was also made clear that it must be easy to choose the climate friendly option, such as recycling or even being able to sell renewable energy to the grid as an individual. The participants also highlighted the crucial need for education on this subject. Furthermore, they discussed how innovation and technology transfer could support the transition. It was also mentioned that the upcoming COP in Poland has received too little attention. Here, they pointed out two things in specific; monitoring, reporting and verification (MRV), and transparency. To conclude, one participant said, in the context of (local) government: “We need coherence, cooperation and coordination”.

This group focused mostly on sharing what is happening in their respective country. The aim was not to come up with concrete actions, but rather to get to know climate policies in the different countries and MO’s. The participants discussed political decisions to combat climate change on a municipal level, party level, and national level. On a municipal level, participants shared how schools and day-cares are eating less meat than before, for example. On a party level, some participants highlighted that they have spokespersons for climate policies. Others mentioned how they are collaborating with other parties on particularly climate change, as it is an issue bringing together politicians from different parties. On a national level, the focus was on e.g. transport and infrastructure and how better railway connections and biking paths can reduce air pollution from cars. Another example is how legislation requiring shops to charge for single-use plastic bags have cut down the amount of plastic bags used. Other topics discussed where nuclear power – whether the MOs are for or against certain subsidies – and the importance of changing the mindset to a climate-friendly one among citizens, parties, and the state. In sum, there was a lot of good practice sharing, and a general will to do even more to combat climate change.