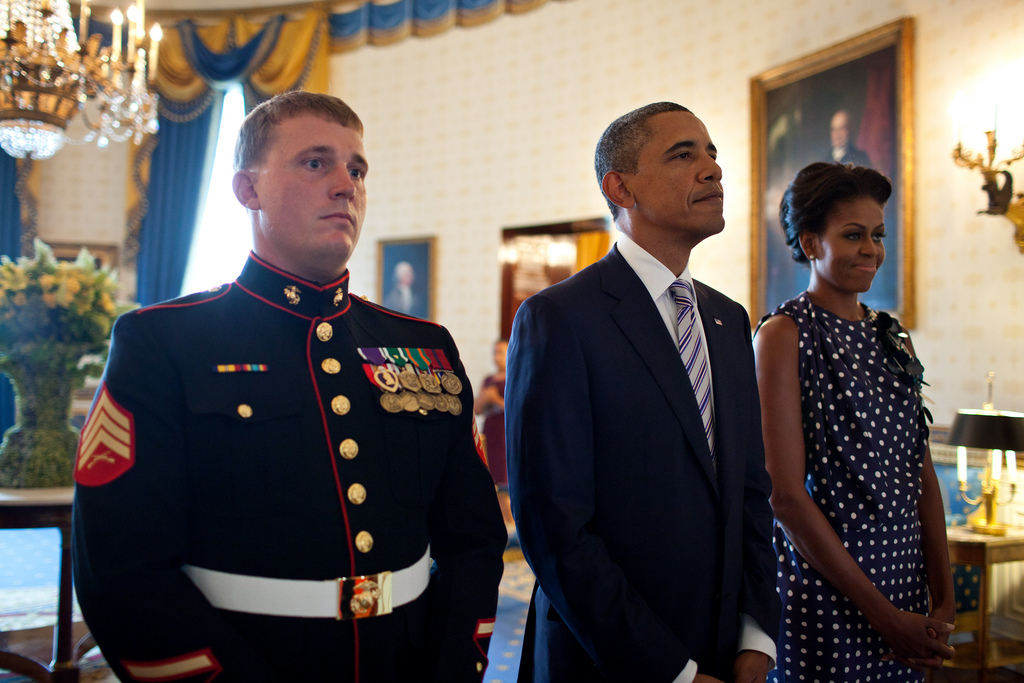 President Barack Obama and First Lady Michelle Obama wait with Dakota Meyer in the Blue Room of the White House before the start of the Medal of Honor presentation ceremony in the East Room, Sept. 15, 2011. Meyer, then a Marine Corps Corporal, received the Medal of Honor for his actions on Sept. 8, 2009, while serving in the Kunar Province, Afghanistan. (Official White House Photo by Pete Souza) This official White House photograph is being made available only for publication by news organizations and/or for personal use printing by the subject(s) of the photograph. The photograph may not be manipulated in any way and may not be used in commercial or political materials, advertisements, emails, products, promotions that in any way suggests approval or endorsement of the President, the First Family, or the White House.

Liberalism and military matters have always been odd topics to square. As with most ideologies, there are nuances and varied interpretations of liberalism.  Generally though, when one takes a bird eye view of liberal ideology, there is a tendency to unconditionally argue against military interventions. The thing is that, in practice, there is nothing really unconventional on how liberal political parties see the military.

Beneath the rosy talk of trade and peace, a sense of pragmatic carefulness is still found. While there might calls for cuts or resource reallocation, very few liberal parties find themselves arguing to disband their armed forces. If we believe that some people will do whatever they want if they can get away with it, then we should expect the same of nations. An army’s primarily role is, therefore, one of deterrence; I don’t think I am blowning any minds, but this leads me to the following question: what should international liberals do when it hits the fan in other countries? How can the use of military force be justified from a liberal standpoint, when liberals tend to avoid intervention in other nation’s affairs?

I use the ‘hit the fan’ term because despite bleeding hearts complaining from all sides, horrible regimes are still given a seat at the table by liberal governments. Much of the revenue from the raw materials used to build the progressive world liberals are so fond of end up filling the coffers of autocratic oppressors of human rights, ethnicities, sexualities, and women. Even with UN resolutions, it is hard to condemn a nation which also buys millions worth in arms year after year.

This is not to say there are no lines in the sand. The killing and kidnapping of students; the use of chemical weapons; impending genocides. All these breaches of global norms call the international community to action.

As with most of my generation, I grew up during the Iraqi and Afghan wars. Some framed the western alliance as the bringers of liberal democracy to genocidal and/or oppressive regimes. Hindsight proved this notion to be terribly misguided. In many ways, they set the precedent that invasions and liberal democratization can, in principle, be argued to go hand in hand, but rarely do in practice. With every piece of news on the atrocities that followed their respective “liberation” initial enthusiasm at a prospect of adding two newly functioning liberal democratic countries to the roster quickly faded as the two countries descended into violence. The destabilizing impact has arguably taken the region even further away from a liberal democracy than they were before the intervention.

As with any suggestion involving politics, it would be ill-advised to have a one size fits all solution. It would be to easy to say that we should intervene in all cases where human rights are trampled, but it is unlikely that anyone would start a war let alone abandon trade with China for the rights of the Uyghurs. Yet, where we can intervene to protect people from an act of senseless aggression we should. At times, this will mean breaking some international laws or upsetting a trade partner. Where liberals can’t, they should create road maps to transform these nations using economic, political, and technological means available. These roadmaps should be designed with military intervention as a last resort in mind; but also, with a clear defined exit strategy to avoid another war that lasts forever. For too long, liberalism has either been on the defensive, or it has been used as a mask for the interest of a few elites. It is time to fight intelligently for what is right, not fall into the pitfalls of over zealous ideology nor unrealistic “pessimistic realism”.

Tiago Machado is an Aerospace and Defence Analyst, currently working with IHS Markit Jane in the UK. He has a Master’s degree in Crisis Management and experience in both international relations and corporate business.