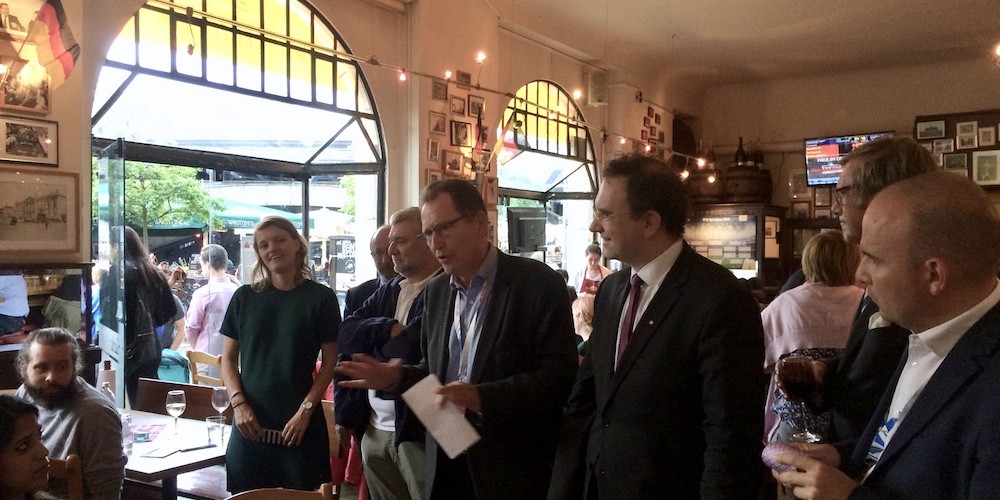 Former liberal leader in the European Parliament Graham Watson speaking at the fundraiser, with Pauline Kastermans and Sven Gerst to the left of him, and Juli Minoves, president of Liberal International, to the right.

For over 65 years, the International Federation of Liberal Youth (IFLRY), its predecessors WFLRY and EFLRY, and regional networks, such as LYMEC and CALD, have been bringing young liberals from around the world together to promote the values of freedom, human rights and democracy. Many of these young people have not only used that enriching international experience to broaden their horizons, but also to find important places in society, that allow them to contribute to the public cause and the spreading of liberalism.

As with everything in this world, organising the events and other activities that facilitate the bringing together of young liberals cost money. And while we have so far managed to find institutional grants to fund a large part of what we do at IFLRY, there have always been aspects of our work that have been difficult to fund. Particularly when young individuals are limited because of political and financial reasons to take part in IFLRY events around the world.

To this end, the Liberal Youth Foundation was initiated in 2014 by young liberal alumni Vesa Turtianen, Sir Graham Watson and Volkmar Kallenbach. In 2017 it was formalized, and is now registered as a non profit organization in Germany. Besides the initiators, who currently serve as President and Vice Presidents respectively, the board includes former IFLRY President Pauline Kastermans as Vice President, former IFLRY Treasurer Daniel George as Treasurer and former IFLRY Secretary General Tone Bjørndal as Board Member. The aim of the Foundation is to support young liberals globally with financial and network resources. For the upcoming IFLRY General Assembly, the Foundation aims to support up to two young activists that would otherwise not be able to attend the event to join the liberal family.

Last weekend, at the Liberal International Executive Committee in Berlin, Germany, we hosted our second fundraiser. It was located at a typical German bar, the Berliner Republik, where the guests could enjoy local beers and the World Cup matches. However, of course no liberal political gathering can go by without brief speeches. Sir Graham Watson, former ALDE president, MEP and currently Vice President of LYF, introduced the event by encouraging everyone to be generous in their donations to the Foundation to support young liberals globally. This was followed by a speech from Dr. Juli Minoves, President of Liberal International, who highlighted the importance of doing this particularly to sustain the future of liberalism locally by taking Andorra as an example. Finally, Sven Gerst, Secretary General of the IFLRY gave an insight into what the contributions could help support: “IFLRY has over 60 member organisations across the world, but it is challenging for many to actively attend all of our events due to lack of funding and the cost of travelling. Your support matters for young liberal activists globally, who are devoting their free time to fight for freedom.”

It’s still early days for the Liberal Youth Foundation, in the upcoming months and years we hope to attract more donors, increase the number of events we run, and ultimately support more young liberals around the world. If you’d like to donate, or simply like to keep updated on the activities of the foundation, then please send an email to: mail@liberalyouthfoundation.org.