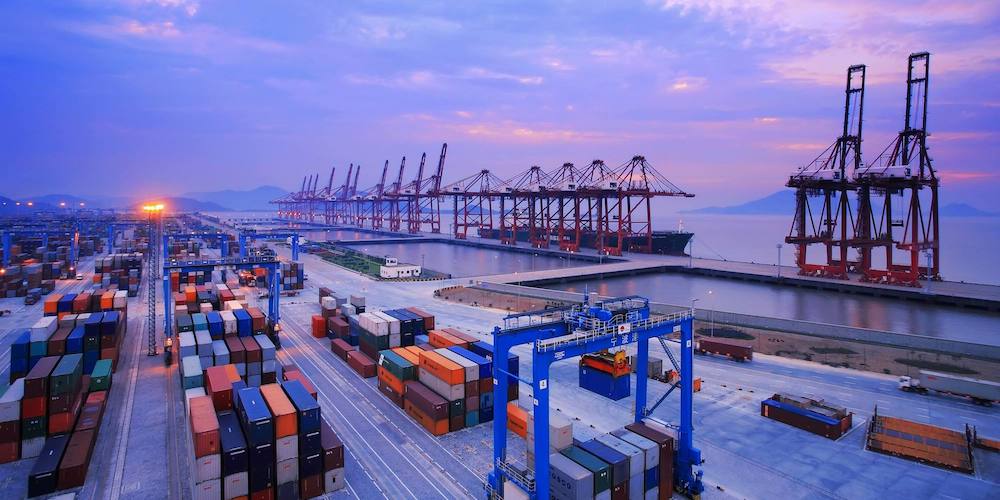 The Port of Ningbo-Zhoushan, near Shanghai, China. Currently the busiest port in the world.

Free Trade, Trade War, Tariffs, World Trade, Poverty, Job Cuts, Protecting Jobs. These are words and phrases that have dominated world news in the past few months, undoubtedly as a result of what has been termed the Trump effect. Many people are uncertain about the long-term economic consequences of President Trump’s increased tariffs on some imported goods. Other’s are quite sure the could lead to global economic problems. Just the most recent set of sanctions against Turkey sent markets into a tailspin. Phrased simply: the freedom to trade is under fundamental attack and it’s the world’s most powerful nation doing the attacking. Economists are starting to seriously worry. No, really this time. It bears repeating: the world’s most powerful nation is putting world trade under attack. And it is likely to get even worse as other nations fight back.

Free trade is an ideal Liberals hold dear, but this ideal has come under threat. What can be done to safeguard it, and its added advantages to the world, particularly to young people?

Although free trade in a strict sense may not be a right, it is the bedrock on which many other rights stand. Free trade is not so easy to explain, yet it is important because it is linked to many other fundamental human rights. For example, the right to earn a living is premised on trade. The right to live in a home can also be linked to the right to trade. The point is that individuals must have a right to trade their goods, services, profession, skill etc, for something they desire. Trade provides the means to live out many other freedoms. The traditional challenge that the free trade has met has been the sovereign right of nations to decide which goods and services to allow into their country. This has been a challenge to free trade, because it limits people’s ability to feely trade according to their desires.

At present, there are numerous divergent legal systems in many countries that make trade around the world very difficult. Policies in the areas of taxes, duties, restrictions and standards -to mention but a few, have become barriers to the freedom of trade around the world, making trade less likely. It has been suggested that with the presence of technology in trading, some of these systems are losing their power, although not completely as some forms of trade are able to take place through technology without getting noticed by the legal systems in that area.

Most of these systems are there to “protect national interests”. But how well do they actually protect these interests? It seems that sometimes they lead to the citizenry being denied better quality goods from foreign markets, and in some cases leading to unnecessary price hikes and illegal trade.

During his campaign, President Donald Trump promised to make America great again. In his view, making America great again means that there must be jobs for Americans in America. His attempt to create jobs in America has led him to think that increasing tariffs on imported goods from some of America’s biggest trade partners will get him success. His singular aim is to create more jobs in America, but the consequences of this action are much more far-reaching more than he seems to understand.

China, the European Union, Canada and Turkey have already imposed retaliatory tariffs on goods made in the USA. The effect is that many traders will no longer be able to participate in their trade networks, as the tariffs make their products too expensive. This effect is not limited to China, the USA, and Canada, but also in all other countries in the world who trade with these major players.

The tariffs also mean an increase in prices on some goods and services that will lead to a situation where a lot of people will not be able to buy the things they could afford otherwise, causing a decline in trade, which will ultimately lead to a decline in jobs – even in the USA, where President Trump is trying to create more jobs. While some coal mines have re-opened – strengthening the conviction of Trump’s base – the increase in the prices of imports has already forced other industries to lay-off staff.  Inevitably, the long-term impact will be a reduction in trade around the globe and reduction in jobs everywhere.

As the IFLRY Free Trade Programme, we wish to call upon young people around the globe not to ignore this issue. We are the direct victims of any opposition to free trade. Let’s get together as we try to gather momentum to send a strong signal to the USA and WTO.