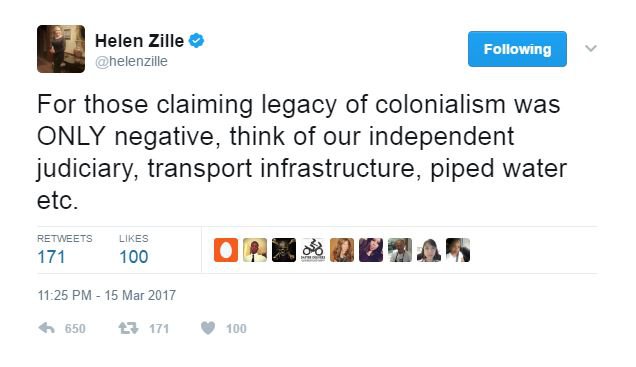 One of the controversial tweets by Helen Zille, a prominent politician of the Democratic Alliance.

In my last blogpost, I wrote about the history of the Democratic Alliance, and my experience of working for the party. It is only two weeks ago that blogpost was published, but a lot has changed in the party since.

It is no secret that the party is going through a challenging time. The DA’s former leader Helen Zille was elected as the DA federal council chair (similar to a position like Secretary General) after the former incumbent James Selfe stepped down after almost 20 years in the position. This was a huge conversation starter as she has been involved in some controversies earlier – the latest one being a tweet she published in 2017 about colonialism not only being negative. Following the election of Helen Zille, the Mayor of Johannesburg Herman Mashaba resigned. Even though he will remain in the office until 27 November, to give enough time to find a replacement, his resignation comes with challenges for the party. As I explained in my last blogpost, the DA governs several major metropolitan municipalities, and Johannesburg is one of them. Furthermore, and most importantly, the leader of the Party, Mmusi Maimane, and the federal chair, Athol Trollip, also stepped down. Maimane explained how “it has become quite clear to (him) that there exists a grouping within the DA who do not see eye to eye with (him), and do not share this vision for the party and the direction it was taking” while Trollip said he is taking responsibility for the party’s results in the general elections this year.

Needless to say that the last two weeks has been bewildering. The future is undetermined as well: an interim federal leader and federal chair will be elected at the next federal council and the party will hold an early congress next year (instead of in 2021, which I wrote in my last blogpost). It is both challenging and exciting to be working in an organisation going through major changes like the DA is doing at the moment. The last two weeks has resulted in many questions from curious friends after office hours, as well as serious discussions with colleagues. Even though the circumstances might seem uncertain, most people I talk to are excited to see what the future holds for the party. I don’t know what direction the party will take, but I know for sure that I will follow the developments even after I return home to Finland in January.