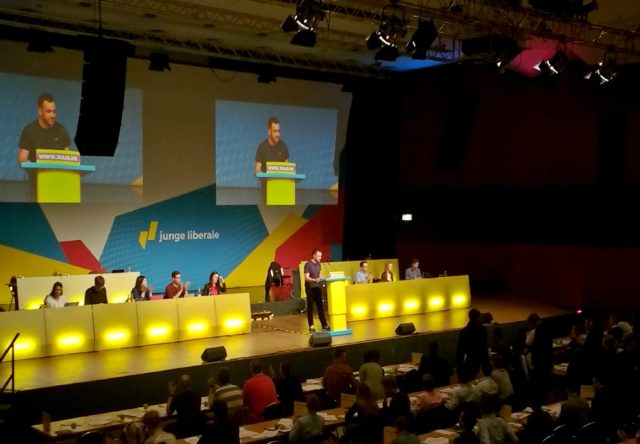 Germany is getting ready to have their general elections later this year, on the 24th of September. A crucial election for the liberal party Freie Demokratische Partei (FDP) which last election saw itself losing their seats in the German parliament. So far, the party has been polling above the five percent threshold for the upcoming elections and their youth organization, Junge Liberale (JuLis for short), is preparing for one of the most important elections in Europe this year.

A part of these preparations was the 54th JuLis Congress,which took place in the charming city of Oberhausen, a few miles outside Dusseldorf. The location was chosen carefully because the state of North Rhine Westphalia(NRW)  will have their own local elections before the general election.

Since NRW is one of the largest states in Germany, the result will give a good indication in which direction the political winds blows in Germany. Hopefully the congress will add some extra fuel to the young campaigners in the state.

Chairman of JuLis, Konstantin Kuhle, commenced the congress honouring the victims of the Stockholm terror attack in a minute of silence. A strong reminder that in times of hardship the countries in Europe do not stand alone. Later the same evening the congress re-elected Kuhle and the bureau of JuLis.

In terms of participants this congress was record breaking, gathering almost 500 young liberals from all around Germany. 10 international guests also visited the congress and took part in an interactive seminar on the challenges in a postfactic age. The international delegation was also at a seminar held by LYMEC president Sissel Kvist, when she spoke about international campaigning.

The congress was suspended during the afternoon of Saturday and Christian Lindner Chairman, of FDP held an intense pep-talk to the young liberals in Oberhausen. He reminded everyone how important the upcoming elections would be, and the significance of everyone’s help and assistance.

An overwhelming congress party Saturday evening didn’t exhaust the delegates at the congress, who finished the last day at lunch time, when a new election program was accepted by the congress. The only remaining topic on the agenda was to say auf wiedersehen to the city of Oberhausen and the other delegates.

Altogether the congress was a good reminder how fun politics are and how important the voice of the European youth is. In a year when several countries have general elections, the participation of young people in the campaigns will play a key role.