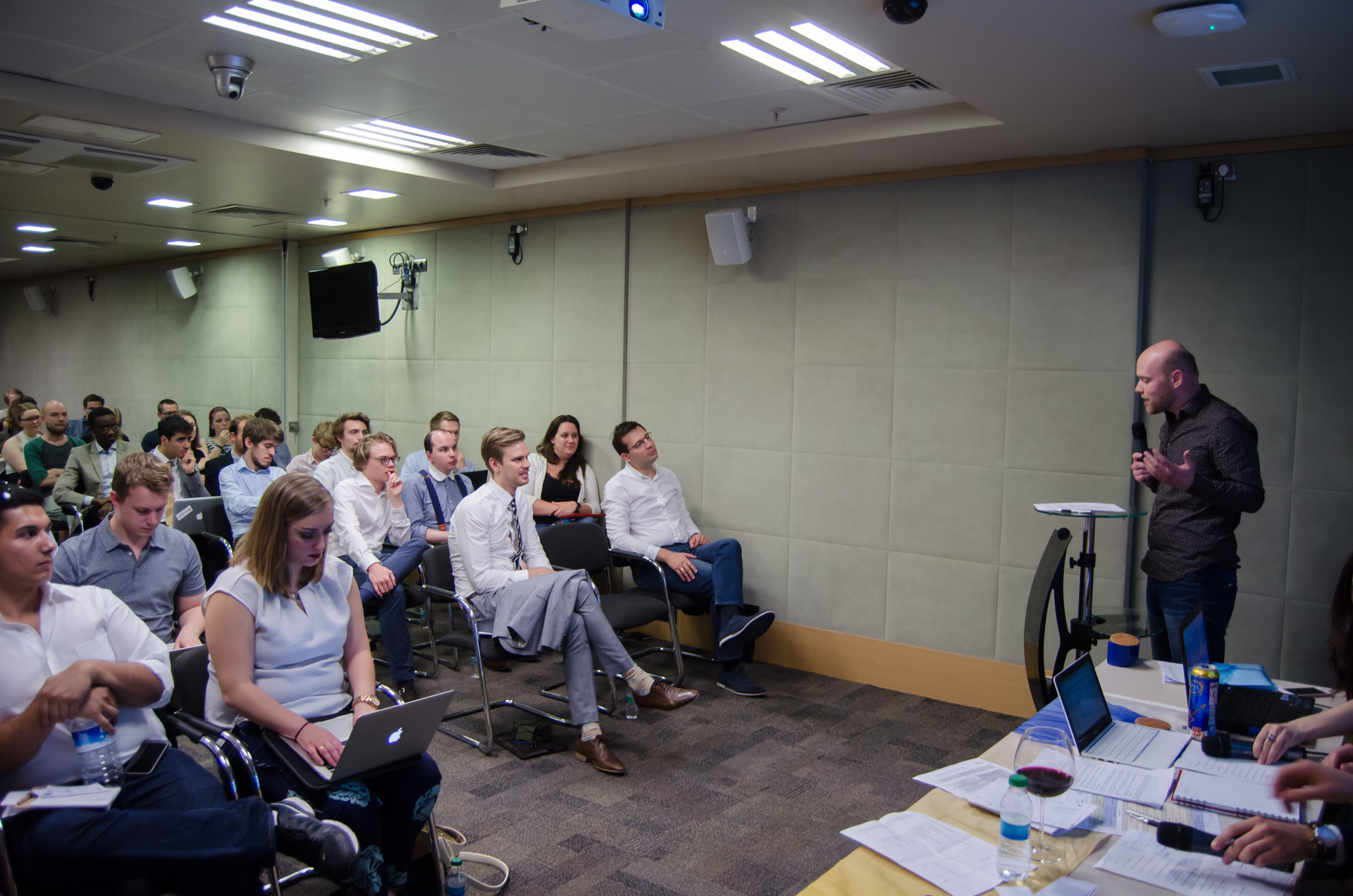 It a pleasure to address you on behalf of Dutch liberal democratic party D66. Today I was asked to share some thoughts with you regarding the recent Dutch no vote on the EU-Ukraine Association Treaty, the refugee crisis and finally global terrorism. Indeed, a fun-packed list for a speech!

Let me start with a bit of history. This year, three hundred years ago, a very important letter arrived from Amsterdam in Cape Town; a letter that would change the future of South Africa. The letter was written by the Board of the Dutch East India Company, the first multinational company in the world and the most powerful global company of its time.

The Board wanted to know whether the Policy Council would recommend more European immigration to the Cape or an increase in slave arrivals. Six out of seven members recommended more slave arrivals. The reason was simple: slaves could supply cheaper labour. One member, however, disagreed. Dominique Marius Pasques de Chavonnes instead made a case for encouraging European immigrants. Though slavery would be more profitable in the short run, he argued that the settlement of free people would be better for the economy, and thus for the East India Company, in the long run.  Free men have an incentive to invent while slaves do not and invention is the root of productivity and prosperity, he said. Similar to what Adam Smith wrote in his Wealth of Nations half a century later.

It’s no surprise that the shareholders in Amsterdam chose the advice of the six men that appealed to their immediate interests. The Cape thus became a slave economy, with high levels of inequality.

By the end of that century, the once mighty East India Company went bankrupt. Its bankruptcy is largely attributed to its short-termism. Low salaries and a ban on private-account trading made the Company a bad employer. An employer that was profitable in the short run, but lacked innovation and suffered from corruption and non-performance of duties in the long run. Indeed, fostering entrepreneurship and being a good employer pays off in the long run.

Today we see short-termism rising again. It takes human form in populists like Donald Trump. In the Netherlands we have our own Trump: we call him Geert Wilders. Many of you may know him as the offensive right wing EU-bashing, Muslim-hating big haired bad boy in the Dutch parliament.

When travelling abroad, I am often asked questions like : “How is it possible that one of the founding fathers of the EU has become a short-sighted nationalistic nation? Why is Wilders so popular? And more recently why did the Dutch vote no in the referendum on the EU-Ukraine Association Treaty?

Again, this has a bit of history. After the Second World War, The Dutch had lost their colonies and urgently needed new sources of income. They wanted to form a cross-border community based on the principles of liberalism and free trade.

Instead we somehow co-founded a coal and steel ‘cartel’ now known as the European Union. Our main trading partner Germany was in, so we followed suit. Many Dutch citizens don’t like the political nature of the EU, so politicians have sold it as an economic project for years. Yet, a lie never lasts in the long run.

When Geert Wilders points out that the EU is not an economic project, but so much more…. He’s right and many Dutch feel betrayed. When given the opportunity, they channel their feelings of resentment.

Yet, many politicians continue to try to deceive them. For example, the night after the Dutch voted down the EU Constitutional Treaty in the 2005 referendum, the government decided to change the words “European integration” in all official government documents to “European cooperation”.

Only last week, the Dutch voted down the EU-Ukraine Association Treaty. Many people did so for reasons other than anything remotely related to Ukraine itself. I disagree with the outcome, but understand some of the sentiments. People are upset and scared of the changes going on around them. More and more holes are appearing in government safety nets. Banks are too big to fail, but jobs are too small to save. Terrorism is on the rise, and your politicians keep lying to you by referring to European integration as European cooperation.

So in response, the Dutch shut out the world, and blame their misfortunes on others. And sure, shutting out the world and blaming others feels good in the short-run. Really good! But it’s a bit like having a drunken one-night stand with a socialist. Sure, it may feel good  when you do it – even better when you do it twice – but later it’s going to somehow cost you when you end up sharing a lot more than you intended to with someone you really didn’t want to share things with.

D66 takes a different approach. We are honest, open and loud to our voters when we say Europe is a political project and nowhere near finished. We need European integration in the short run and in the long run, not just for trade. We need it for our freedom and security, we need it for sustainable energy, and we most urgently need it for a humane response to the ongoing refugee crisis we are facing today.

This brings me to the topic of this IFLRY event in Turkey: the refugee crisis. No one chooses to be a refugee, people simply want to live at home in safety and free from fear. Yet, thousands of people that escape from Syria are far from free. They find themselves arbitrarily detained in a prison closed off from the outside world by several layers of fencing topped with barbed wire. These people include torture victims, young children and people in need of immediate medical care.

Short-termism is how I would characterize the solution to this all, the so called ‘EU – Turkey deal’. A deal that states that for every Syrian refugee returned to Turkey from Greece, a Syrian will be settled within the EU. Basically, every resettlement place offered to a Syrian in the EU is contingent upon another Syrian risking their life by embarking on the deadly sea route to Greece.

This narrow focus on shipping people back to Turkey instead of making unconditional efforts on resettlement and offering other safe and legal ways to Europe is not only dehumanising, it also offers no sustainable long term solution to the ongoing humanitarian crisis. Any return system not built on the principle of an individual’s right to access a fair and robust asylum process under humane conditions is deeply problematic.The EU simply cannot outsource its obligations and turn a blind eye to the consequences.

Geert Wilders argues against taking in any Muslim refugees because violent radical Islam would take over the country, while in reality it is exactly that what these refugees are running from.

Islamic civilization was once known as the modern world. The Quran was once read as a liberal and progressive document. Millions of Jews once fled European  persecution to live in relative peace and security under the Ottoman Caliphate. Today, Jews, Christians and Muslims are fleeing shoulder to shoulder from Iraq and Syria as radical Islamists take control of those lands. It’s the same religion then and now. So what is different?

It’s not theology, it’s politics. Radical Islam is the product of the broken politics and stagnant economics of Muslim countries. Indeed, they have been in need of a liberal economy for decades. Instead, they have found in radical religion an ideology that lets them rail against the modern world.

How can we bring an end to this? There’s really only one way: Help the majority of Muslims fight extremists, reform their faith, and modernize their societies. In doing so, we should listen to those on the front lines. They say their task is made much harder when Western politicians, condemn Islam entirely, demean their faith, and speak of all Muslims as backward and suspect. Western politicians such as such as Geert Wilders in the Netherlands, Marine Le Pen in France and Donald Trump in the US. And if I ask around in this room, we could make a long list. Each and every one of you have these populists in your countries. They are dehumanizing, unfair and outright racist. We have to show that we understand that Muslims don’t hate us, and we don’t hate them but support them in their courageous fight for freedoms. Freedoms that we take for granted.

We have to stand for treating people as individuals and not as stereotypes of a racial, ethnic or religious group. Of course, it can be hard not to make these quick associations – especially in the wake of a terror attack. But if liberalism is about anything, it is the idea that people should be judged as individuals with individual liberties and individual rights. It is what Islamic terrorists hate about the modern world. Our best response to the Syrian refugee crisis and Islamic terrorists is to live up to our own liberal ideals in everything we do.

Thank you for your attention and see you tonight when we toast to freedom on the streets of Istanbul!

This speech was given at IFLRY’s  2016 spring general assembly in Istanbul by Ivo Thijssen (Netherlands, 1980). Ivo was active on the IFLRY Bureau as Regional Bureau member of behalf of LYMEC – European Liberal Youth in December 2010- May 2014.
He was also board member of D66′ foundation IDI and chaired the party’s European Affairs committee. He currently works for the Netherlands Authority for the Financial Markets (AFM) and continues to represent D66 in international affairs.