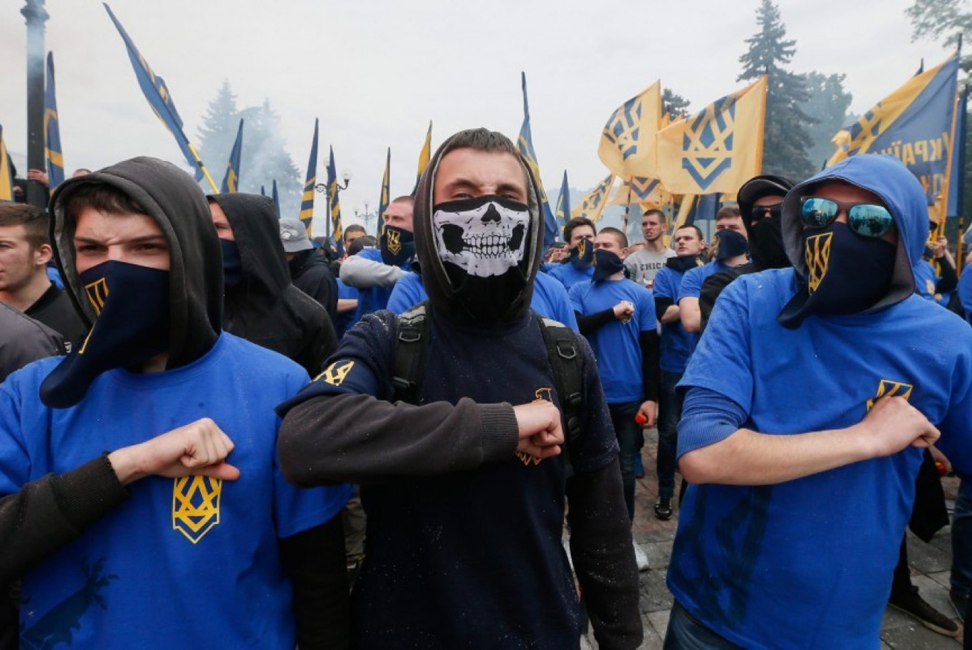 In Ukraine, hardly a week passes without news that some radical rightwing activists went on a strike or beat someone up. Hiding behind elusive topics like religion, language, patriotism and war, ultra-radicals continually commit crimes, still worsening Ukraine’s notorious reputation in this respect. And yet, despite all this, many ultra-nationalist organizations continue to grow.

A journey into history

Every political movement has its hero. For Ukrainian right-wing groups, Stepan Bandera. His struggle during WOII to liberate Ukraine from soviet control has made him the “founding father” of modern independent Ukraine. However, Bandera is a controversial figure. While he is seen by many as a true nationalist, many others see him as a Nazi collaborator. Not only do Ukrainians hold opinions strongly opposing opinions on Bandera, these opinions are also sharply divided by region:  while Western Ukrainians consider him as a national hero, in the Eastern parts of the country he has a fame of a traitor and collaborator.

Stepan Bandera was born in 1909 in Western Ukraine, which was at that time under Austro-Hungarian rule. At the age of 24, he became head of the OUN (Organization of Ukrainian Nationalists) national executive. The main aim of the organization was to make Ukraine independent. Thus, their activity was pointed against both Soviet Union and Poland, which meant they did not have a chance to succeed unless they found an ally.

During WW2, OUN-UPA made a life-changing decision and collaborated with Nazi Germany, hoping that it would lead to the creation of unified Ukraine. As a result, OUN members perpetrated massacres of Poles and fought against fellow countrymen under soviet rule. Yet, the Nazis were getting increasingly concerned about the escalating Ukrainian nationalist movement. In 1941, Bandera and many other nationalists got arrested.

Although the activity of the OUN, especially Stepan Bandera, is regarded by many historians as a xenophobe and a terrorist, modern far-right organizations still believe that threatening and killing are appropriate ways of making people patriotic and conscious. These exact principles probably guided the members of “C14”, when they destroyed a Roma settlement in Kyiv, violating human rights and the Ukrainian constitution.

This situation is only the tip of the iceberg. The crimes of ultra-radicals include attacks against peaceful activists, preventing of pride parades and more. And yet, these groups suffer very little opposition and even admiration within Ukraine. The main reason for this is organizations such as the Azov Battalion. Originally one of the 30-odd privately-funded “volunteer battalions” that, in the early days of the war in Easter Ukraine helped the regular army to defend Ukrainian territory against Russia’s separatist proxies. This makes many ordinary Ukrainians feel they deserve respect for defending the country. In addition, the president and the police do not take any steps to stop these radical movements. This is because the president doesn’t want to lose votes with conservatives and nationalists in the upcoming elections.

There is, however, a bright side of this problem. The surveys have shown, that only 0.7% of  respondents are eager to vote for the leader of “National Corps” Andriy Biletsky. This means that the actions of nationalists terrify not only foreigners, but also the Ukrainians themselves.

While most Ukrainians understand the serious threat of the right wing, the international community could be misled by constant reports about the danger of nationalists, slowing down the process of EU-integration. As a result, Ukraine can become less attractive for both tourists and foreign investors. In addition, the Russian government often uses the threat of Ukrainian nationalist movements as a way to justify their actions in Eastern Ukraine, further “adding fuel to the fire” of the Russian-Ukrainian conflict.

In conclusion, ultra-radicals are a serious threat to the international reputation of Ukraine. Playing on the feelings of patriotism, they cause more and more discord in Ukrainian society, instead of uniting it.

I was born in Kiev, Ukraine. Being a proud citizen and a politically conscious civilian, I do my best to make my country thrive and evolve. In order to do so, I am an active member of LDLU, the most promising liberal organization in Ukraine. And it is my passion to make my country and the world in general aware of the political situation in Ukraine and change it through hard work in LDLU. At the moment I am a pupil, but it is my hope and duty to study journalism in future.