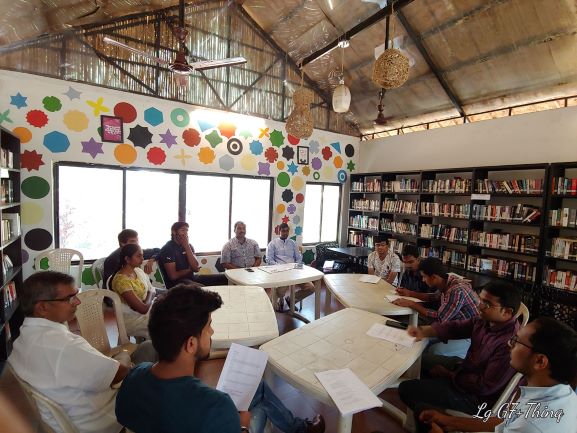 You are a Founder of Swatantrata Center, which is a policy think tank. Most of your work relates to youth politics and youth NGO work. Could you talk a bit about how Swatantrata Center is structured, and who the people that are active in the organization are?

Swatantrata Center runs largely through volunteers who serve in various capacities. We have a board and the executive team, which is helped by a team of volunteers. Our board consists of professionals from information technology, politics, academia, non-profits, business, and media.

Our flagship project Youth Parliament Program (YPP) is led by our co-founder & programs director Raghavendar Modala. YPP is our main outreach initiative to reach young minds on public policy, liberal democracy, free markets, political reforms, and limited government, etc. YPP runs as a semi-autonomous project with its own executive team and board of advisors.

Do you play any role in domestic politics, for example by working with a political party or other partners?

I personally did engage in politics for almost 10 years as a student leader and youth leader of a pro classical liberal party called Lok Satta Party. It was founded by Indian public intellectual Dr. Jayaprakash Narayan. I have served in various positions in the party and participated in multiple state election campaigns in states of Andhra Pradesh, Telangana, Tamil Nadu, Karnataka and Maharashtra. I quit active politics after the 2014 Indian general election to pursue other means to promote ideas of a free and prosperous society, particularly working in civil society organizations like non-profit think-tanks. My decision to work with civil society was influenced by a motivation to undertake community engagement for social and policy change.

I have increased my interest in international politics while working with international Liberal foundations, especially liberal European politics. After I moved to Europe, I have been looking for ways to be involve in the liberty movement, and through that I got to know about ALDE party and LYMEC through FDP/JULIS events in Germany.

Since 2016, I have been actively engaging in the Alliance of Liberals and Democrats for Europe (ALDE) Party and its youth wingEuropean Liberal Youth(LYMEC) as an individual member. I was also an active member of +Europa (More Europe) and Italian Radicals party and actively campaigned for the party in Northern Italy during the 2018 Italian general election. I was also fortunate to be involved in the campaign of Free Democratic Party and JULIS (Young Liberals Germany) during the 2017 German federal election and European Parliament election, 2019.

Swatantrata Center is Civil Society Organization, which is involved in political engagement through the Youth Parliament Program. But it won’t engage in the electoral process.

Following up on that, how do you see the political climate in India? What are the challenges for liberal organizations?

The Indian political climate is extremely divided between a nationalist right vs pseudo liberal left and such a division is dangerous to the idea of a free society. The growing trend of ultra-nationalism and socialism/ far-left ideology in western countries has had an influence on many young people in India. India today is caught in the grip of a resurgence of majoritarian nationalism, which has led to cultural high-handedness and absorption of illiberal values among the general population. India has historically had a strong cultural influence of socialist thinking, which is a challenge for organisations in promoting liberal values. The challenge in India is to present a moral and cultural understanding of liberal ideas to appeal to the people of India who are diverse and rich in potential.

What are the fundamental values you are trying to transmit, and how do you work to promote these? Both before the quarantine, and now, which is probably a bit different.

We believe in ideas that are particularly important for understanding and supporting the good society — a pluralistic society in which intellectual and economic progress is the norm, and where individuals flourish in a context of openness, voluntary and peaceful cooperation, and mutual respect.

Swatantrata strives to advance ideas and policies that cause human flourishing through policy education, digital activism, and grassroots advocacy.

We provide educational and learning opportunities for young people to understand and gain exposure to ideas and policies to build a free society. We also equip them with knowledge and the necessary tools to promote positive change through policy-making and political practices. The Youth Parliament Program initiative has been the biggest success for us.

We will utilize the power of the internet to reach more people. We run digital campaigns that can reach a huge number of people and engage with the power of social media. Our in-campus and online policy conclaves on public policy, free cities, economic reforms, etc. have been very successful.

Our flagship annual conference #SwaCon went online due to COVID 19. #SwaCon is the world’s first of its kind and one of the largest libertarian virtual conferences with the theme of “Reclaiming Liberalism (classical).” We were able to bring more than 40 Classical liberal/libertarian scholars, experts, entrepreneurs, and academics who spearhead the cause of liberalism and human flourishing all over the world.

Are there any other international organizations that you work with? What does the work on the international level look like? How important is that for you?

The struggle for a free society is universal and hence international cross-border cooperation between like-minded individuals and civil society organisations helps grassroots movement like ours to emulate best community engagement and policy practices while learning from our friends abroad.

Swatantrata center is really good at an innovative way to reach young people, and we have been hugely successful at the startup stage level with a limited budget. We have reached hundreds of people both online and offline within the first six months of expanding our outreach. We have organized two of the largest conferences of its kind (one on-site and one online) with a small team and a limited budget. Our organization and our leaders have been mentioned/appeared in the media more than 25 times. These achievements are definitely unimaginable for not only new foundations but also for established ones. And they also encourage our team as well new members to work innovatively.

The main source behind this success is our human capital (team, supporters, volunteers) and their passion as well as our strategy of partnership building with various organizations such as foundations, universities, youth organizations, and student groups.

How do you think you could still improve?

We are yet to start our research activities where we are lacking enough skills and resources to support our vision. And we are in the process of developing a strategy to streamline the research and policy advocacy of our organisation.

While we have been able to accomplish many things with our limited team, there is a growing need for our organisation to work towards a coherent professional set-up to accommodate more people as we expand.

What are the projects you are working on for the next year?

We are trying to continue some of our successful projects like the Policy Conclaves, Youth Parliament Program, leadership bootcamp. We are also working on multiple digital and grassroot campaigns on responsible spending /fiscal responsibility, greater economic reforms, and decentralization of power. Our plan is also to develop an online portal for liberal and policy resources in the form of documents, interviews, job opportunities, seminar announcements and other resources to acquaint young students and professionals to liberal ideas.

What was your motivation to become a part of the liberal movement?

Having been born and brought up in a small village in Southern India, I was part of a family involved in agriculture and later my parents were also street vendors. Our financial positions, my family and many others in rural India back then had a lot to do with the government’s economic policies. These policies always have been socialist and populist policies instead of providing a policy environment where people can have more economic opportunities to build a decent life with dignity instead of depending on welfare programs.

As a teenager and living through those experiences, I started to involve myself in civil society organisations and grassroots movements advocating for policy reforms. The economic reforms of 1991 brought a tremendous change in the lives of India’s poor, which includes my own family too. I was part of the Loksatta movement, which spearheaded a movement for more citizen engagement in public policy and advocating greater political freedom and liberal institution building. I had my fair share of both political activism and civil society advocacy.

During my initial engagement with these organisations, I wasn’t sure that liberalism by itself is an entire world view and that individual liberty is part of its noble framework. I mean to say that I was part of reform and advocacy groups but never knew that what they were promoting was inspired by liberalism in its political, cultural and social manifestations.

It was only after I got the opportunity to attend the training seminar of International Academy of Freedom (IAF) in Germany that I got to know the noble cause I have been fighting for yet could not articulate that well. I can say that I was a liberal by instinct, but I could not tell it with the same articulation.

I believe what motivates me to spearhead the cause of liberalism is the sum of my own experiences and I want to make that change in the lives of so many Indians who are liberals by instinct but do not know that yet.

This does not bring me into the liberal movement but it’s what keeps me in the fight for liberty.