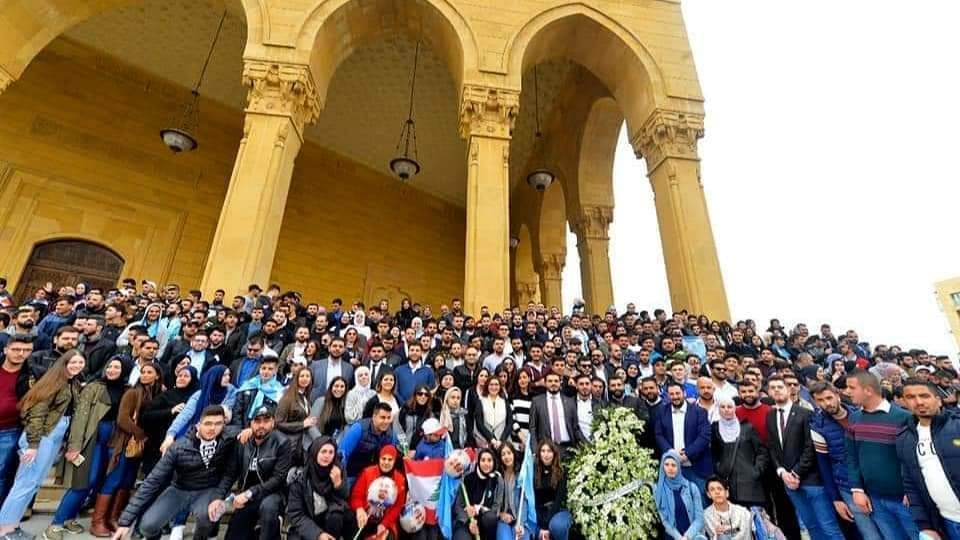 Image Courtesy of May el Masri

How long have you been active in politics in general, and in Future Youth specifically?

I actually started to be active in politics with Future Youth. That was almost eleven years ago, or maybe twelve. I was in university, and I wanted to be active in politics and so I searched for an organization that had values that were similar to my own, which were liberal values. Back then, I took really small steps into liberalism. I was interested in the liberal economy, and social liberties, but I didn’t have much information on the broader liberal spectrum. When I started being active, I also became familiar with more topics regarding liberalism.

What are the fundamental values of Future Youth, and how do you work to promote these?

In our community, or society in Lebanon in general, we very much stress freedom of speech, free trade and individualism. These are the three main pillars we discuss and promote our organization with.

Can you tell me a little about how Future Youth works? How is it structured? What kind of people are active in it?

We have people active all over Lebanon. We have, regionally, almost the same organization as our mother party, Future Movement. We have 15 districts, but there are also people who are active in the universities, and in high schools as part of the students’ councils. Every bureau, or office, operates separately, but they all connect and report to the central bureau. That is the main bureau, of which I am the Secretary now. Every office, they do weekly meetings and then they report to the main bureau, with which we also have weekly meetings. If there is an event, it could be centralized, which means there is one main event that is organized in all regions. Some events are also done on a regional level or in universities. So there is independence within event organization, but if an event relates to the main values or the main agenda of the organization, then we do it on the organization level.

How do you work with Future Movement? What is your role in Lebanon’s domestic politics?

As a youth organization, Future Youth is an organization by itself, but we are also part of the mother party. We have, as a body, the right to vote in the general elections for the party. Because we are a very big organization, we are the biggest body in the mother party; we have more votes than other regional councils or other entities within the party. In domestic politics, we have the same political values and the same positions as the mother party, but if there is something that we think should be done differently, or if we think that something is not beneficial for young people, then we raise it to the party leadership. We also bring forward general youth issues and topics within the party, if we think that something should be addressed, with a specific policy or something.

Looking at the current situation in Lebanon as well, how are you dealing with the protests and everything that is happening at the moment?

Well, it has definitely been a challenge for all traditional political parties in Lebanon, and as a youth organization, it has been even more challenging, because young people want to be involved and they are now more motivated than ever for change and do things differently to how politics have been run in the past years. I think it has been a very important role for us as a youth organization within the party. In a sense, we were the middle ground between people in the protests, people on the ground and the party. So, we did discuss what the people in the protests wanted, what reforms they asked to be made, and we did discuss that with the leadership in the party. I think that Prime Minister Hariri was very hopeful, because we have been elaborating on what people wanted and what they thought went wrong. He was very positive and took those issues very seriously and into consideration, also in terms of our role in Lebanese politics.

What are some of the projects or activities you are working on?

I think that the economic situation in the past year has been very hard for us as a youth organization, budget-wise, but that did not stop us. We also kept working during the covid crisis, where we conducted a series of online trainings, in parallel with participating in the IFLRY online trainings and sessions that have been going on. We had our internal online training program via the Pool of Trainers in Future Youth. We have also been working on youth civic engagement and on civic spaces, because with the protests going on, there have been a lot of issues regarding civic spaces and how they are perceived in Lebanon. This was also related to how the government reacts towards the civic spaces and the people who are on the streets, so that was a very interesting topic to work on domestically in Lebanon.

What role does IFLRY and international work play for you? What would you want the cooperation to look like?

I think that, also historically speaking, we have had a very good relationship with IFLRY, which has been very beneficial to us as an organization. We can look at very important topics from different perspectives and see how they differ culturally from people who come from different countries. It is really quite an experience, because there are some topics that are always problematic in politics, regardless of where you are. The international world gives you a different perspective and a new horizon from which to look at things. It also has been very interesting for us to learn about issues related to liberalism, because I think that IFRLY could be one of the fastest growing political organizations, also in an academic sense. It has evolved onto a whole other level over the past years and that was very good for the learning process of young people, on certain topics that are very important.

This year, we decided to really work on skills, on the empowerment of young people. When after the protests you have a lot of young people who are more engaged in politics and who are more engaged in civil work, you have to equip them with the tools to do it. So we really stressed the skills for that, and we did a lot of trainings on soft skills and on leadership, too.

How do you think Future Youth could improve?

What has motivated you to become active in liberalism, and to become involved with a liberal party specifically?

Growing up as a female in the Arab world was very challenging for me. I always seemed to be facing obstacles, with some things that just didn’t make sense for me, on a societal level. That was the first motivation for me to go into politics and try and change the mentality of the people and the community that I live in, all while preserving the culture as well. I did not want to go and be offensive and that’s why I found that politics could be a good place to start working on the policy level and the rights level.

Are you optimistic about those ideas catching on, and the future in general?

Yeah, definitely. And I think that if I could take some of the positive outcomes of the protests it’s that it has pushed people to think about human rights and human dignity and gender equality and to think about what hasn’t been going very well in Lebanese politics.