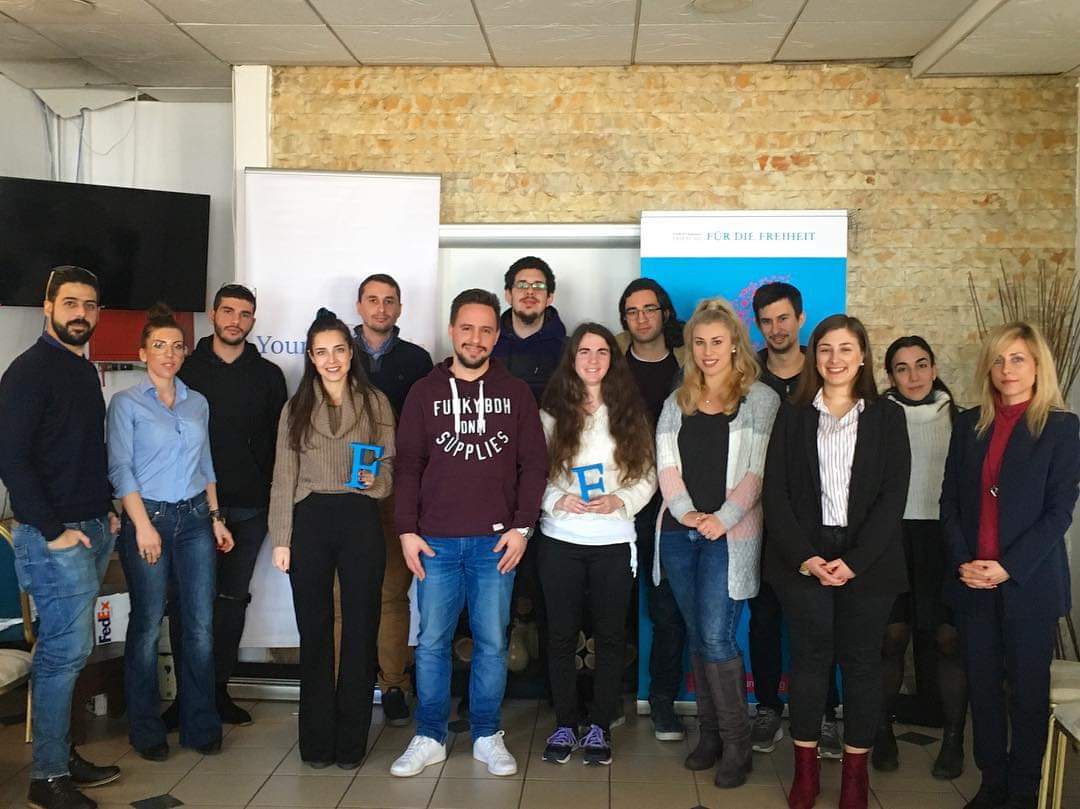 George-Marinos Papanikolaou is a co-founder of the Young Liberals Greece and has been Chairman since the establishment of the organization in January 2017. He has been involved in youth politics since his years at university, where he served twice as a student representative in the General Assembly of his School. After university, he engaged in local administration politics and he was elected as a member of the Municipal Youth Council as Vice-President. He is an alumnus of the FNF Liberal Seminars and attended several trainings, seminars and workshops that were run by liberal institutions such as FNF and ELF. In May 2017, he was the leader of the delegation that applied for the associate membership of Young Liberals at the LYMEC Congress in Stockholm and achieved to become member after the positive vote by the congress plenary. The Young Liberals organize events, workshops, training, and debates all around Greece to promote liberal values. They believe in European integration and the necessity for structural reforms in Greece and Europe as well as free speech, an open society and a free economy.

You are the chairman of the Young Liberals Greece. Could you briefly present your organisation and its most important values?

Young Liberals Greece is a youth-work organisation founded in 2017. We are 7 founding members that all have a political background or work for local administrations. Since 2017, the Young Liberals have been growing strong so that we are able to run several committees now. Each committee is responsible for a specific region for example the one in Macedonia. As we are a youth organisation, we try to establish participation of young people in Greece. We consider ourselves liberals, which means we believe in the rule of law, in a pro-European future and in a free economy. The economic aspect is very important for us, as, due to the crisis, the Greek economy is rather closed. We believe in the power of each individual to start their own business without any obstacles forced on founders by the government.

In the electoral system, Greece lacks a liberal party at the moment. Can liberalism still be found in your society?

Even though we do not have liberal party, I would not agree with the fact that liberalism is a rare idea. Liberalism is very common in Greece and many people believe in it. There is a misunderstanding by many Europeans, because in Greece there is no liberal party as you can find it in other countries. At the moment, we have a government of a centre right party which also has some liberal views concerning certain topics. Still it is a statist and conservative party that has approaches contrary to our liberal views. Young Liberals started to work as an umbrella organisation in the beginning to create a network of Liberals. We want to connect the liberals in other parties to work together for liberal approaches.

It is a fact that Greece was influenced heavily by the financial crisis and still we turned back into the European direction. In the European Union, there exist a lot of countries that tend not to respect the European values, but still they did not receive as much pressure as Greece over the last years.  Greece of course sometimes failed the financial instructions of the EU and was not able to follow the demands of the European government. Even after many failures Greece chose to be part of Europe and to have the European direction we need in the future. The problem is that the European Union demanded higher taxations instead of structural reforms that could help Greece to reclaim its place. Greece is one of the first members of the European Union and we believe that we are in the heart of Europe. Currently we are returning to our previous position. We want to be the stars not the guest stars in the EU or a second class country of Europe. Of course there is a lot of work left to do and topics that need to be discussed. Still, we focus on what it means to be part of the European family and what it means to be European.

The referendum was a really strange situation back then, but the question is not that simple. Before the referendum took place, it was already cancelled by the EU commission. So it was false decision taken by the government to let a vote take place that basically did not exist any more. Also the question was not about Pro or Anti Europe. It was about whether or not we want a more liberal form of the rescue package from the European Union. In any case, the faith will be restored by giving the people results. We saw in many cases, for example with the stability funds how the government is able to give perspectives. We achieved many things over the last years and we will achieve more in the near future. Confidence has returned to our economy and stock markets. Recently, there has been an announcement by the Greek- German chamber of commerce that Greece is a safe country for investors. This is very important to us to see our partners realizing our recent development and economic success.

The Young Liberals Greece are one of the pro-European stakeholders and since 2017 also a member of LYMEC. What makes you believe in the future of Europe and the place of Greece in the European Union?

Of course, there is a wound in our faith in the European Union and what we expect from it. But now that part of the crisis is in the past, we see that the people tend to feel more European. When we see in the media and in the newspaper that Britain left the EU or other countries do not take part actively in countering Turkish aggression or integration of migrants we still get disappointed. Greece tries to fulfil its obligations and we expect others to do the same. Anti European voices are today very few and they only come from the far left or the far right. It is only a small percentage of the popular vote or the popular opinion.

Where do you see political opportunities for the Young Liberals in the future?

We have lot of members that are elected in the local municipalities and councils. We have former mayors and people with a lot of experience. We hope and imagine to also have representatives in the national parliament in the near future.

What are the next events and activities from the Young Liberals Greece our readers should be aware of?

This is very important for us and we want to invite everybody to join us in our events. We will have our first electoral congress on Saturday the 21st of March. On the following Sunday we are going to organize with the Friedrich-Naumann foundation here in Greece the second Liberal Youth Convention. The first took place in Thessaloniki back in 2014. The people who formed the Young Liberals met in the first Liberal Youth Convention. Today we are partners and we try to move something in the Greek youth. So we are looking forward to welcome many Liberals and to connect more widely.