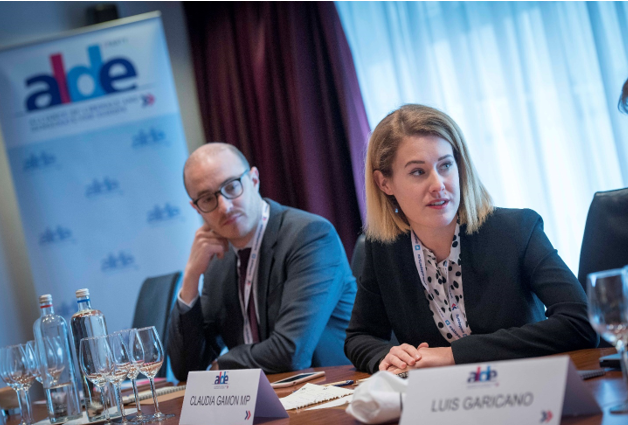 Meet Claudia Gamon, a young liberal from Austria, who is fighting for a united Europe with liberal values. Former Deputy National Chairwoman of JUNOS, the youth wing of the Austrian liberal party NEOS and an IFRLY member, she has been working with NEOS since 2013. Currently, she is a Member of the European Parliament and Vice-Chair of the EP Delegation for Northern cooperation. Our Communications Officer, Luca Arfini, discussed with her how she got involved in politics at a young age and about her party’s good result both in the national and European elections.

Why do you identify as a liberal?

I stand by liberal values – both politically and as a person. I believe in open society and open economy and that politics should encourage, support and empower each person to achieve their goals.

You have been involved in politics since the age of 23. Starting from the Austrian Students’ Association elections and ending with the 2019 European Parliament elections. Could you please tell us more about your political experience and what the skills are that make a young person a successful politician?

I started in university politics and have tried to build on this experience also further on in my political career, working in science and research policy. Apart from that, I have tried to build up more and more know-how in different political fields as I went on. It is important to stay open and to use one‘s general curiosity. I think that young politicians can benefit from having an open and positive view on politics and should harness that – cynicism can cloud your judgement.

NEOS, The New Austria and Liberal Forum, had a great result in both the 2019 national and European elections. Indeed, your party gained respectively 8.1% and 8.4% of the votes, recording its best result since its foundation in 2012. Why do you believe that NEOS  gained more popularity through the past few years?

NEOS has proven to be an important force in Austrian politics by being a strong but constructive opposition party that focuses on solutions and holding those in power accountable. It is important to “show your work” – and NEOS has done so by being consistent and true to its values. Furthermore, I think that voters appreciate our honest political view – even if something might not (yet) be favoured by a majority of voters, we stand by these ideas if we find them to be true, important and the right thing to do. Honesty is appreciated.

What, in your opinion, are the greatest challenges faced by liberalism nowadays and how do you believe young liberals should operate to fight them?

We liberals face many challenges but what sums them up best is simply: populism. It can appear in different forms (anti-immigration, anti-European, anti-science, anti-capitalism and so on) and must be met with facts, truth and political passion.

As an elected MEP in the Renew Europe group, how do you intend to tackle the issue of climate change at the European level?

Fighting climate change should be a key issue for liberals: we are the ones whose task it will be to bring together climate and market economics. I truly believe that we can only fight the climate crisis effectively if we provide smart market-based solutions. We will also have to provide the proof that these solutions are successful, and this is what Renew Europe should fight for as a group in the EP.

In 2007, Austria became the first member of the European Union to adopt a voting age of 16 at all political levels. What is your opinion on the matter? Could this be a future model for the rest of the member states?

I hope that many other countries will follow. Young people are just as affected by political decisions as older citizens might be – if not more! – but in many countries their voices are not heard. Lowering the voting age gives young people the chance to be more involved in politics. After all, many of them are already working and paying taxes, so why shouldn’t they be able to participate?

What are your suggestions to youth that want to run for an election?