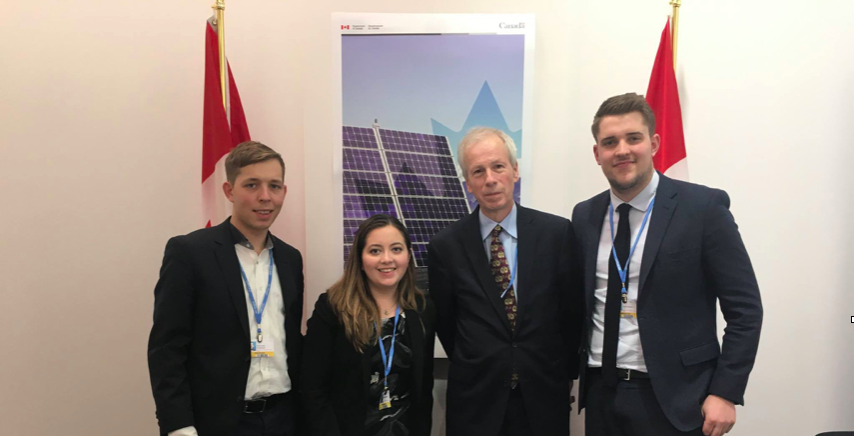 Canadian ambassador to Germany Stéphane Dion (second from the right), together with Simon Kran Christensen (left), Perla Hernández (second from the left), and Jonas Lembeck (right), at COP23 in Bonn, Germany.

During the 23rd UNFCCC Conference of the Parties (COP23), the a delegation of the IFLRY Climate Change Programme met with Stéphane Dion, former Canadian Minister of Foreign Affairs under the Justin Trudeau administration, current Ambassador to the Federal Republic of Germany and Special Envoy to the European Union and Europe. Our delegation had the opportunity to talk to him about the development of the climate negotiations over time, Canadian leadership on international climate negotiations as well as the role of youth engagement in fighting the challenges that climate change has got in store for us.

Mr. Dion on the development of climate negotiations over time:

Stéphane Dion was responsible for the implementation of the Kyoto Protocol as Minister of Environment for the Paul Martin administration and he envisioned and pioneered a government platform merging the environment with the economy back in 2008. Stéphane Dion is still very involved in climate negotiations – he delivered Canada’s closing statement at COP23. IFLRY’s delegation to COP23 was very grateful to listen to Ambassador Dion’s insightful reflections on the process of the climate negotiations, which started in 1992 and are still ongoing, from a Canadian and international perspective. Regarding the progress made with emissions reductions, he stated that it depends on the perspective: if one compares the Canadian performance to 1990s levels where both the oil and gas industry grew (in part due to the implementation of the North American Free Trade Agreement (NAFTA)), there is still a lot of work to be done. However, if one compares current performance to 2000s levels, progress has been made.

As to the outcomes of the COPs over time, Mr. Dion pointed to the historical achievement of the Paris Agreement, especially after the failure in Copenhagen 2009. However, he acknowledged that current Nationally Determined Contributions (NDCs) made by the international community will not be sufficient to reach the set goal of 1.5 to 2°C warming – a level which would significantly reduce the impacts of climate change: “Until now, only one third of the job is done and we are close to reaching the point of irreversible damage”, he stated. In this context, successful and productive negotiations at each year’s COP after the conclusion of the Paris Agreement are of vital importance to ensure that the goal of limiting warming to 1.5 to 2°C is reached.

On Canadian leadership of international climate negotiations and the Powering Past Coal Alliance:

As the latest example for attempted Canadian leadership on climate policies, the Powering Past Coal Alliance was launched at this year’s COP in Bonn. The alliance currently consists of 27 countries pledging to phase-out of traditional coal power plants and abstain from all investment in coal domestically or abroad. Mr. Dion reiterated that part of Canada’s strategy would be to push negotiations abroad whilst at the same time being exemplary at home. He stated, without phasing out of coal, the goal of staying beneath 450 ppm CO2-equivalent in the atmosphere cannot be reached: “However, unfortunately, the era of coal does not seem to be over just yet”. Adding to this, the great health impacts of coal are additional reasons why countries should leave coal behind according to the diplomat.

On the role of youth engagement in effectively tackling climate change:

Ban Ki Moon famously stated that we are the last generations that can actually stop climate change.  In this regard, the IFLRY delegation asked Mr. Dion what were his hopes for the upcoming generation to effectively tackle the enormous challenges ahead of us, and what the Canadian government can do to include young people in the process.

Mr. Dion pointed to the great importance of knowledge and its diffusion amongst younger generations through new technologies in an increasingly globalized world. With that he meant continuously stressing the importance of knowledge around a more conscious way of consumption and decision-making. Ambassador Dion also talked about the need for a paradigm shift in governance to a more collaborative and holistic model that integrates sustainability across sectors: “Sustainability should be integrated in every department: finance, global affairs, department of health and so forth.  This way the work of Minister Catherine McKenna at COP will be reflected and implemented throughout the government structure, percolating to society”.

Mr. Dion also talked about the importance of getting everyone in society on board with this new sustainable paradigm and stop preaching to the already converted per say. He warned that if knowledge around climate change and its threats and opportunities will not be translated to the people, the image of the whole planet stays an abstraction for many. Moreover, Mr. Dion stressed the importance of an open and internationally-oriented mind-set as “Greenhouse Gas Emissions also don’t know any borders”.

From a liberal perspective, meeting Ambassador Stéphane Dion underlined that Canada has taken important steps towards emissions reductions with a clear plan and ambitious goals, a federal carbon pricing system which will be implemented in the Pan-Canadian Framework on Clean Growth and Climate Change starting in 2018, as well as the pledge to phase-out of coal. Canada ambitious stance also remains an example for other countries. With the appointment of an Ambassador for Climate Change, as well as its encouragement for a strong private sector and civil society participation from women, young people and indigenous groups at COP23 in Bonn.

Of course, not all that glitters is gold. Even though current targets will be sufficient to reach (and potentially overachieve) the goals set in the Canadian NDC, there is still the need for more drastic measures for an equitable Canadian contribution to reaching the Paris goals. This was also acknowledged by Mr. Dion during our conversation. However, Canada should continue increasing its levels of ambition leading the international community by example. In the words of Justin Trudeau:

“Inaction is not an option. We can’t walk away from the reality of climate change.”