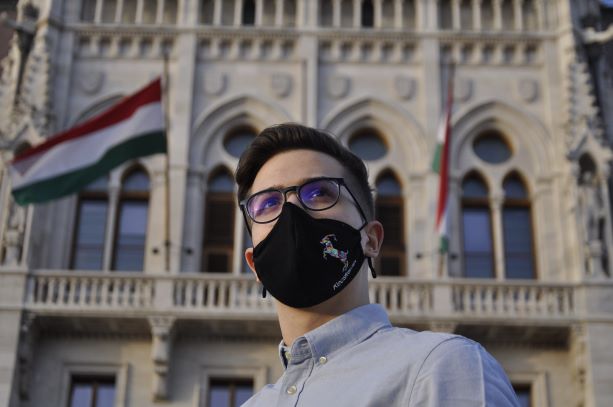 Let’s start our Libel investigation about young political leaders of the European Union. Could you please tell us about Momentum Tizen X – what kind of people your members are and what projects do you work on?

First of all, thank you for this opportunity, it means a lot to me. My name is Barna Bíró, I’m a member of TizenX, the youth wing of Momentum. The youth wing consists of people from the age of 14 to 24, so we are really focusing on the younger generations and we just had our third birthday this year, so we’re a young organization.

Basically, we are doing politics on the streets and we are always at the front lines of the demonstrations. I think this whole Momentum and TizenX phenomenon is a new thing in Hungarian politics. We are really successful in being the voice of the younger generations in politics because in Hungary it’s a big problem that they are apolitical. They don’t want to deal with politics, because all they have seen was that it is dirty and brutal. We want to change that and show that it can be different and promote the participation of young people in politics. I think this is the top aim of TizenX and we are successful in it.

How did you decide to join Momentum Tizen X and when was this decision taken?

I remember it clearly. It was the evening of the parliamentary elections of 2018; I was just 17 years old at the time and I remember that I was watching TV about the election results. Suddenly, the map came up showing that Fidesz won again with a total landslide, gaining a two-thirds majority in the parliament for the third time. I knew I had to do something about it, and I was curious about Momentum, so I went to the computer and checked if I can join the organization. I realized that at the age of 17, I couldn’t; so I checked if they had a youth wing. And I found TizenX, which was just two months old, I think, at the time, so it was really the start of the organization. I sent the application that evening and a few weeks later we came together in an attic that was our “office” to talk about the future. I think there were about 20 people there with no electricity, so it was like how a start-up is beginning their business in their first days. I think if Fidesz would have been defeated in the elections, I would not be part of any political organization, but I saw that I have to do an active part as well, and not just sit in front of the TV blaming politicians for our current situation.

I really liked the lines you mentioned about start-ups and I really wish you to gain this level of success as Apple did. How did your movement manage to gain popularity in the context of political monopoly and media silencing?

It’s a big problem that the media is mostly controlled by Fidesz, so it’s hard to reach everyone in the country. But the main boost for the mother party Momentum was the “NOlimpia” campaign in 2017. We gathered signatures to hold a referendum about the Budapest Olympics, because we saw that our economy couldn’t handle that and that it would be just another project for Fidesz and its oligarchs to steal public money. People weren’t asked whether they wanted the Olympic Games in Hungary, so we wanted to call a referendum about that and give the people a chance to decide. This was a huge success, we gathered exactly 266,151 signatures as a young movement. In the end, Fidesz backed down and they said: `Okay, we won’t hold any Olympic Games`. This was a huge boost for Momentum. I think our big advantage – mainly for the youth wing – is that we are doing politics on the streets, we are always outside, speaking with our voters. We have a lot of mini-campaigns, which are nowadays really hard to do, because we decided not to have any physical close contact with people because of the pandemic situation, but other than that we are successful in leading demonstrations and thematizing public discourse, so we really think creatively.

With all your experience in personal campaigning and being active in the streets, you have decided to join the race for a parliament seat in 2022. How have you decided it and what stands behind this decision?

The opposition parties decided to run together in the 2022 parliamentary elections with one list and with one on one races in the constituencies. First, we will have primaries this year between the opposition parties to decide who will be the opponent of Fidesz. In the beginning, I was really thinking if it is even appropriate that a 19 year old guy joins the race of the parliamentary elections and I was really not sure whether I should go for it or not, but my family, the whole party, and the youth wing supported me so I said: okay, let’s see how it goes. I am running as a candidate of Momentum in the primaries in my own constituency, where I grew up and where I live. Even though I just turned 20, I totally understand the problems of people living here, because I’ve grown up among them and I know what kind of challenges they are facing. It is still not sure who will be my actual opponents in the primaries, because Momentum was the first party to declare their candidates, but I’m really looking forward to a friendly, refreshing competition because this primary is a really innovative thing in Hungary.

It sounds so ambitious and really motivating, probably not only for people who are just thinking about how to start their own political life, but even for experienced people. What are the core pillars of your program?

First of all, we have to see that the representatives of Fidesz don’t really care about the problems of the locals but since they are elected in constituencies, their top priority should be to help the ordinary people living here and to deal with challenges they face every day. As for me, I am studying economics and that is what most interests me, but my focus is not just on economic issues.

There are four pillars in my campaign. Our region has a lot of economic potential, so it would be foolish not to build on that. Therefore, my first pillar is the local economy. Kecskemét is an economic center of the country with several multinational companies and a lot of innovative local enterprises but we lack green and sustainable industry, even though the region has the potential for it. We want to change that and give incentives and support for local green small and medium-sized enterprises, which would create jobs and benefit the region.

We are also emphasizing the situation of transportation. If you see the streets and roads in Kecskemét and the local towns, it looks like you are in the 19th century and not in 2021 in a modern European city. We want to guarantee quality roads to the citizens with a well-functioning, sustainable public transportation system. That is our second pillar.

Brain drain is also a huge problem for the region. Younger generations either leave for Budapest or to Western Europe to study and, unfortunately, most of those people never come back to our region. We have a university in Kecskemét with great potential, so our goal is to make it more attractive and to offer an alternative to the younger generations to study and work here. That is our third pillar.

The last pillar of my campaign is inclusivity and the aim to really involve people in the decision-making. Locals will have a chance to share their views on the region and on the policies we offer. The current Member of Parliament from this constituency operates like a feudal landlord and sadly it shows. We want to give power back to the people and let them make their voices heard. That is our fourth pillar.

Thank you for sharing! How do you communicate with your future voters? What tool is the most efficient in communicating with the electorate?

There will be a lot more tools to use in the future if the pandemic situation will be much better, but currently, the main tool is Facebook. We moved to the online sphere, we are communicating to our voters there. But throughout my whole career in politics, I really liked going to door-to-door campaigns and speaking with voters in person. That was my favorite thing in politics, I really liked to do that. Unfortunately, I cannot do this now due to the coronavirus, but I’m really hoping that in the following months I can visit as many households as I can in the district.

I have to say that the local media does not support us here. In our city, it is controlled by Fidesz and almost all newspapers are part of the propaganda media, so they are not interested in the opinion of opposition parties. They’re not helping us with the campaign, so we have to use Facebook, YouTube, Instagram, and even TikTok, which is a huge success among the younger generations. So, I really hope that when the situation allows it, we will do face-to-face, door-to-door conversations, and campaigns with our voters because that’s why I think Momentum is successful. It is time-consuming, but we think that it’s worth it.

How many members of Momentum Tizen X joined a race for the seats in the Parliament? Is it challenging to engage youth in politics?

Not all the candidates of Momentum are declared yet, so I don’t want to spoil it, but several members of TizenX will be running for seats all over the country. I think I’m the youngest one, 20 years old, but the other candidates are also in their early 20s. It is a new and innovative thing in Hungarian politics, and I am really happy that Momentum allows young people to participate. The party knows that the country needs new and fresh faces. This will definitely motivate the younger voters to take part, not just in elections but in politics as a whole. However, my experience was that part of the older generations is against us, and Fidesz fuels this hate. They really fear that the new generation, which wants change, will go to the polling stations, and will elect fresh and young faces. Fidesz is not popular among us, so they will do everything to stop us; otherwise, they will be defeated.