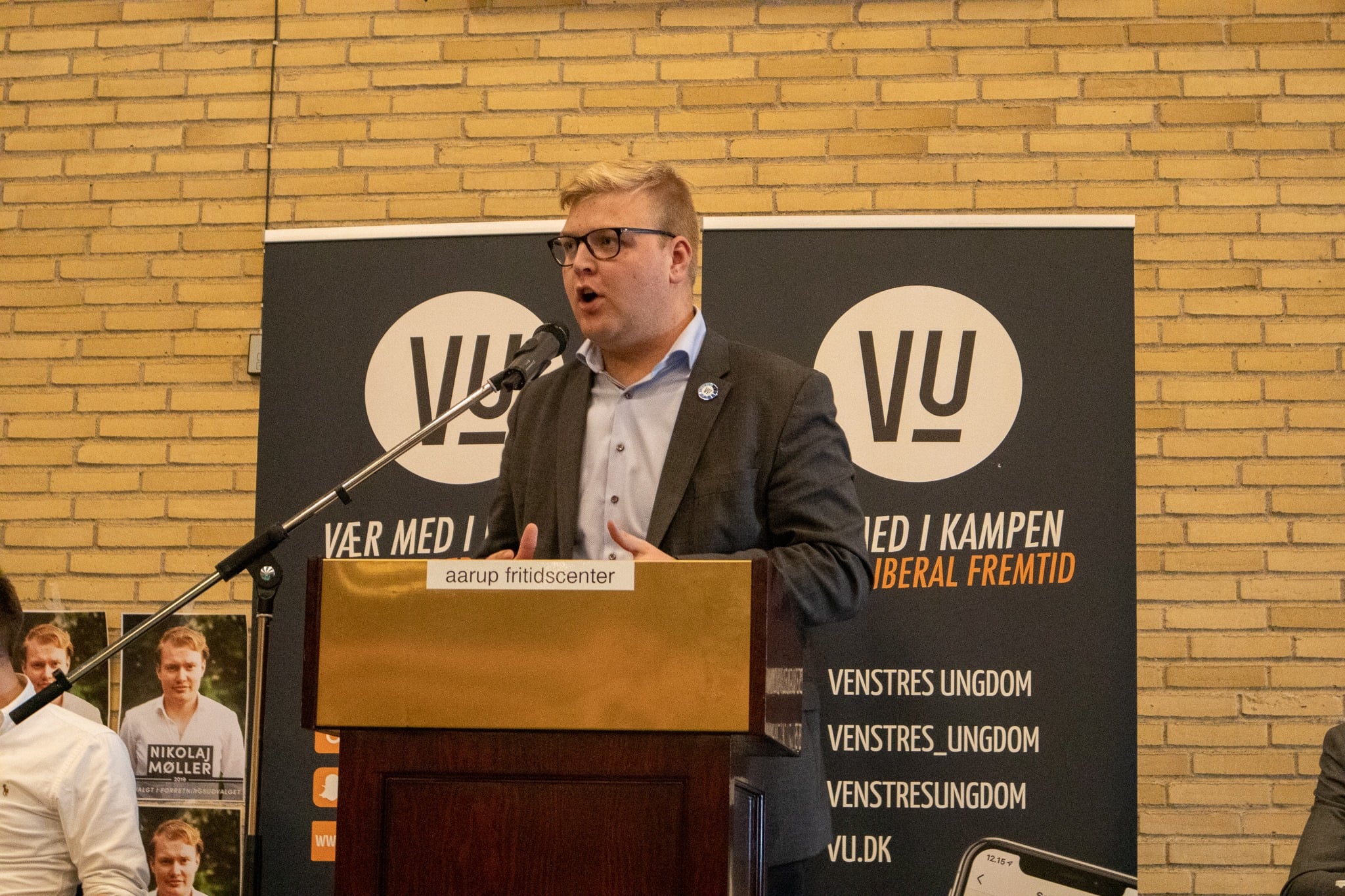 Why should liberal youth organizations engage in international work? And are we, as young people, able to achieve anything by doing so? While sitting on a corona-deserted train, I interviewed August Stengaard, the international officer of Venstres Ungdom (VU) to find out.

Venstres Ungdom is Denmark’s largest political youth party, with more than 2500 members. And although it is very active nationally, comprising no less than fifty national branches, the organization does not limit itself to domestic politics. ”As liberals, we naturally have an international vision to spread freedom of thought outside our country’s borders,” it says on the organization’s home page. Through a corona-correct Skype interview, I spoke with the international officer, August Stengaard to find out more.

Having been a member since the age of 14, August’s list of positions reaches from executive committee member to local chairperson and spokesman. Since September of last year he has been the international officer — a position that he thinks is of great importance to the organization. “Having spent one year as an ordinary member of the executive committee, I knew that I was ready to take more responsibility, and when all comes to all, I think international work is one of the most important areas we cover. Partially because it is a scene for more activistic work, but also because it offers members opportunities and experiences that they would not otherwise have gotten”. Talking about his own passion for international work, August expresses how “one thing is talking about “changing the world”.  Another is to actually go out there and actually try to do something”. In spite of being new to the role as international officer, the last 12 months have taken him to the USA, South Africa and Brussels.

“One of the things we have been doing for a number of years”, August explains, “is to arrange study trips in which we meet locals and — among other things — help campaigning. By doing so, we learn from others, and though we might sometimes arrive with our own perceptions of how to do things,  broadening your horizons and daring to be challenged is an important lesson.” Just a few weeks before Corona paralyzed the world, August himself travelled to the US with seven other members. A trip that gave him an insight into the American election system, granted him an opportunity to meet locals to better understand why they vote and campaign as they do. The US is, however, not the only country that VU arranges study trips to, and apart from the yearly Brussels-trip, trips to places as different as Sarajevo, Tel Aviv, Budapest, and Russia have taken place within the last years.

Though the study trips offer members important international exposure, these are far from the only international activities taking place. With help from the Danish Youth Council, VU currently has three different project groups working with fellow young activists in Zambia, Morocco, and Ukraine. Whereas the relatively newly established Zambiagroup works with a local women’s rights organization, the Morocco-group has existed since 2014 with the aim to strengthen participation in and understanding of politics in a country where 45% of the population is under the age of 45. Furthermore, the aim of the Ukrainian partnership is to improve the prospects for a democratic and free future, something that happens through a partnership with Liberal Democratic League of Ukraine.

Thirdly, by being a member of the global liberal youth association IFLRY, its European counterpart Lymec, as well as the Nordic Youth Council, VU can influence youth politics at the international level, just as the foras are great platforms to get new ideas and friendships around the world. “Meeting someone from Venezuela for instance, is a great lesson in learning to appreciate our Danish background,” August states.

The importance of pluralism

“I firmly believe that ideologically and politically, it is crucial to have an understanding of other people, other religions, and other ethnicities. Historically we see the importance thereof”, August states. Hence, engaging in international work, he emphasises, it is important to remember our ideas about equality before the law, human rights, and cultural acceptance: values that must come before anything else.

Pluralism lies within the liberal DNA, and hence it has to be brought into the international work as well. “I think it is healthy to open up the discussion even within areas where most people might share the same opinion,” August states. As an example, he mentions how two years ago a study trip to Israel and Palestine was arranged, and though most members might be pro-Israel, the trip included a day trip with Breaking the Silence: An organization of veteran Israeli soldiers whose aim is “to expose the Israeli public to the reality of everyday life in the Occupied Territories”. “It is my overall impression that the average VU-member is very interested in meeting people who do not share their philosophy of life: Something that is emphasized by the fact that several local branches have been visited by Nazis, Hizb ut-Tahrir and others whose opinions we definitely do not share.” Being engaged in international work is, according to him, an opportunity to cherish the argumentativeness and get a nuanced view of the world. “We must never be afraid to challenge our own perceptions”, he repeats. “If that happens, we are lost.”