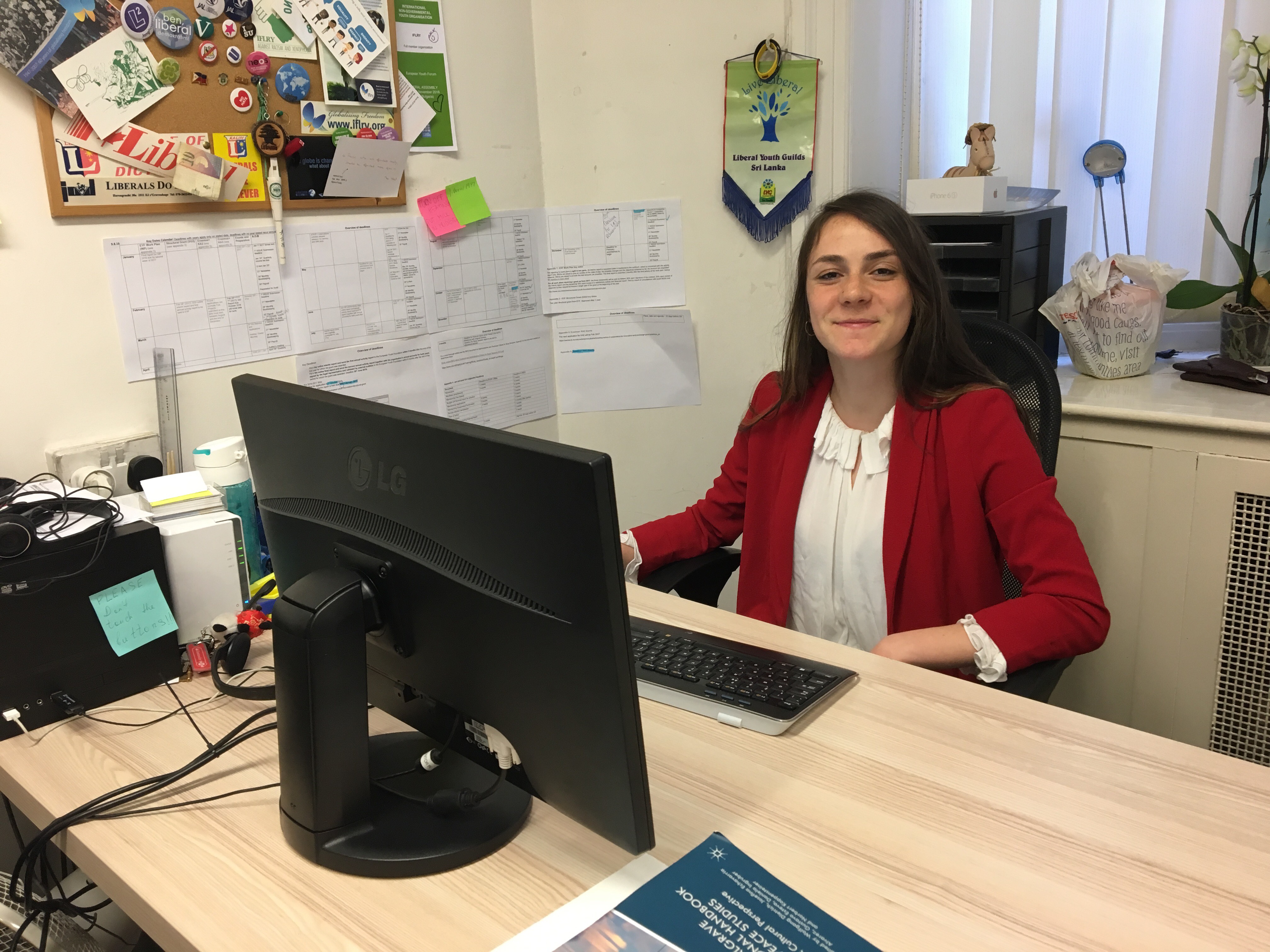 Andrea sitting behind her desk in the IFLRY office in London, United Kingdom.

As of October, Andrea Ugrinoska is IFLRY’s new Executive Director, she is IFLRY’s only full-time employee, and is responsible for running IFLRY’s office in London. Krijn van Eeden, Libel co-editor, interviewed her to find out more about her and her role within the organisation.

Can you tell me a little about yourself?

I’m Andrea, I’m 24 and I’m from Skopje, the capital of Macedonia. I was a professional snowboarder until the age of 18. During that time, there was nothing but sports in my life. But I had to quit because I started having problems with my knees. My body couldn’t handle it any more. And then I realised there was this whole other world out there besides sports.

Because I didn’t know what to study after high school, I decided to start a degree in Psychology – only to find out that that wasn’t really something I liked doing. But it was a good in a way because it led me more to social sciences. At that time, I also became part of a student organisation called AEGEE, a European student organisation, where I ended up becoming the Vice Chairperson, which also meant I got more involved at a European level. I even once chaired a general assembly of the organisation which had 600 delegates attending. This really boosted my skills, and made me start wanting to go into politics and international relations. That is why I started to do a master in European Studies in Brussels, and I’m actually finishing another master now, which is a UNESCO chaired master in Austria about Peace and Conflict Studies.

After being involved in AEGEE, I started to working for the secretariat of the National Youth Council of Macedonia, as an expert on policy and international relations. So I was traveling a lot to the European Youth Forum, representing the Council there, and at other international organisations. This was more interesting that at AEGEE, because at a national level we had a bit more influence, and actually met politicians. The situation at the time in our country was very bad, because we were not fully recognised as a youth council, but we were getting a lot of support from embassies and a lot of funding, and the work was really interesting.

At the point when I had to leave for Brussels to start my masters I couldn’t work for the secretariat any more, but then I joined the board of the organisation, and I’m actually still a board member there, so I’m still kind of contributing.

So you moved to Brussels and started you masters in European Studies?

Yes, and the one on conflict studies in Austria. I think decisiveness is a bit of a weakness for me, so that’s why I ended up doing both. Luckily, I’m done with the one in Brussels, and I’m now finishing the one in Austria.

When I started in Brussels, I did an internship in an organisation called Youth for Exchange and Understanding (YEU), which is where I learned a lot of project management skills – actually, the projects that they were working on are very similar to the projects that IFLRY is working on right now. Over all, I’d say I have managed to gain a lot of experience from the different organisations I’ve been involved in: I gained experience with project management skills at YEU, political experience from the National Youth Council, and experience with the management of a big organisation from AGEE. I’ve also been involved in a lot of pools of trainers, and I thought for a while that I would just keep doing that. But then the opportunity to become Executive Director for IFLRY came along.

Why did you decide to apply for the position of IFLRY Executive Director?

Even though I have spent a lot of time working in politics before, I never aligned myself with any political party or movement. In Macedonia this is very common, all political parties have bad reputations, so people will usually think of you more negatively when you join a party. Therefore, many people who are interested in politics get involved in politics in ways that don’t require you to affiliate yourself with a party, and try to postpone the decision which party to join as long as possible. Also, because Macedonia is still transitioning from its time as a part of socialist Yugoslavia, politics is really only thought about in terms of the left or the right. Because of this, I only became familiar with liberalism when I started studying for my masters. I ended up writing my master thesis on international institutional liberalism; particularly on the involvement of the OSCE in the conflict in eastern Ukraine. Because of that I ended up reading a lot about liberalism, and I slowly got more familiar with it, and ended up feeling like I started to understand the ideology behind it pretty well.

At the end of my masters, I started looking for positions like Secretary General or Executive Director, and then this position came up. Even then I still wasn’t completely decided on whether I wanted to join the liberal movement – it feels a bit like liberalism has found me, rather than the other way around. So I read a bit more about the ideology, and then decided to apply, thinking that I had very little chance of getting the position, since I wasn’t a member of any of the IFLRY member organisations. I really felt like an outsider, and wouldn’t have much chance of getting the position. So I was really surprised when I got the position in the end.

What was it like to start your job at IFLRY? Were many of your expectations met, or were there many surprises?

I would say that around 50% of the responsibilities that I have as IFLRY Executive Director, I was already familiar with because of my involvement in other organisations. But every organisation has its own way of functioning, so the other half was completely new. The previous Executive Director, Mane Manukyan, spend a good deal of time with me to prepare me, and hand over all the tasks. But the first day I was in the office on my own, I sat in front of my computer and thought: OK, what do I do now? It was then that I really noticed that this job was going to be very self-driven. I’m not going to have people who are pushing me to do things, but if things go wrong I will be responsible.

So far, I also feel like it’s a lot of work to stay on top of everything. When I come into the office in the morning I usually have a list in my mind of the things that I plan to do that day, but then 1000 new things jump in as the day progresses, because there are things that are going on in the organisation that I have to attend to, so the job involves a lot of multi-tasking. The most important thing is that I make sure that the contact between me and the IFLRY Bureau runs smoothly, and that we’re all working in sync. Also, I find it important to make sure that the Executive Assistants that work with me in the office are keeping busy with things, so I have to make sure that I assign the right task to them. This is also new to me, because before I used to be in a position where I was managed. This is the first time where I actually have to manage other people. Keeping an overview of what everyone is doing, and making sure that things are done properly is a big part of my job as well.

The job is very dynamic and interesting, and I feel I learn new things every day. That being said, it also feels impossible, because no matter how hard you work there are always more things that remain undone. Also, Mane set a very high standard, and I feel like I have very big shoes to fill. Luckily the Bureau is very understanding, and they are accepting when I make mistakes or things don’t go quite as smoothly as before. That saves me a lot of stress.

Before you said that half of your job was new, and half of it comprises of tasks you did in other organisations. Can you describe to me what is new and what is the same?

I have a lot of experience with project management and project implementation – organising seminars, organising events that sort of thing. But then each organisation has different ways they organise their events. For example, IFLRY sends out a reader before certain events, and I wasn’t familiar with those. This is just a matter of learning the specifics of the organisation, after the first time you remember that that’s how things are done here, so it quickly becomes routine. The organisation that IFLRY is active in is another part that I’m more familiar with, l had a lot of experience with the European Youth Forum for example, and IFLRY is also a member there. What I’m not familiar with is the structure of the IFLRY Executive Committee, so I’m excited to learn more about that.

What is also new for me in this role is the finances. In my previous work I have never been responsible for that part of the organisation. There, there was always an accountant that was responsible for the financial side. Here I have to do bookkeeping, keep track of the budget etc., which at moments is really overwhelming, because I’m not familiar with all the procedures. And it involves a lot of focus and responsibility – one wrong number and everything goes to hell. But of course it’s always good to know what it’s like to run the financial side of an organisation, so I’m not complaining about having to do all this work, so it’s good experience.

Is there anything that you’re looking forward to doing in the upcoming months? Do you have any ideas about what you want to contribute to the organisation?

I’m looking forward to exploring new options for funding for IFLRY. The funds we have now are sufficient to keep us running, but the ones that support us now are very limited to ones that come from Europe. This makes it harder for us to organise events outside of Europe, and to be active outside of Europe in other ways. From January on, it will by my focus to find sustainable sources of funding outside of Europe, that can support our global mission. This is something I’m very much looking forward to. It is going to be something I don’t have much experience with, so it’s going to be quite a big challenge, with a lot of trial and error. But if I manage to secure funding for one or two more events per year outside of Europe, then I’ll sleep well at night.

Andrea Ugrinoska, thank you very much for this interview.

Krijn van Eeden is a philosophy student studying in Frankfurt, Germany. He is originally from the Netherlands, but used to study and work in London, where he did his BA and worked for the Liberal Democrats. He is currently co-editor of Libel.