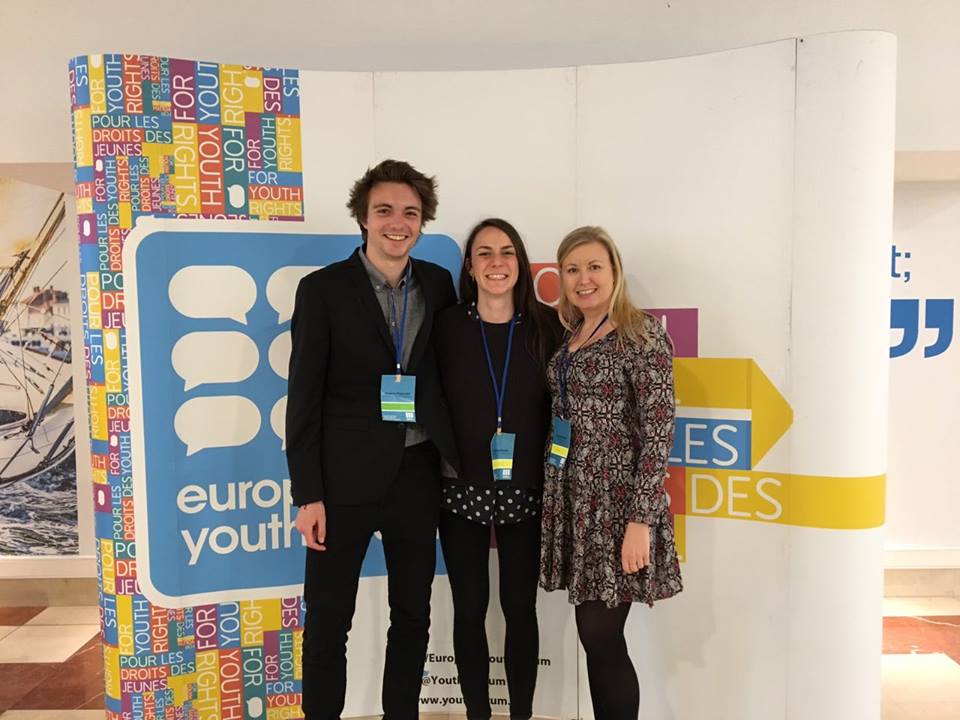 The platform has both a board, similar to IFLRY’s Bureau, that runs the daily work of the organizations, and an advocacy channel: The Advisory Council (AC) on Youth to the Council of Europe. In April, at the Council of Members (COMEM) in Brussels, Belgium, we had to elect the new representatives to the AC. One of the candidates was IFLRY’s very own Executive Director, Andrea Ugrinoska. To support Andrea with her elections, and to experience my very first European Youth Forum event, I took part in the COMEM. Also there for support was Danica Vihinen, Executive Director of LYMEC, our European sister organisation.

The whole event started out with a #YouthUP gala event at the top floor of the Committee of Regions building in the heart of the European Quarter in Brussels. With a gorgeous view of some of the most important institutions in the city: the European Parliament building, the Berlamont Building that houses the European Commission and European Council building. It was a very symbolic venue for the gala indeed. The evening was kicked-off with speeches from the President of the European Youth Forum, Luis Alvarado, and representatives of both the Council of Europe and European Parliament before the evening became night and the festivities, mingling and networking could begin.

The first official day of the COMEM began with presentations from various participating organizations. Andrea and I held one on best-practice-sharing of campaign ideas between the member organizations of IFLRY. For this, we had gathered examples of different campaigns. We told participants about a campaign against the nationalist by the liberals in Sweden (LUF), on debating MDM sales by Jonge Democraten in the Netherlands and the online campaign for the freedom for the Venezuelan people, #LibertadParaVenezuela.  The participants of the session were impressed and inspired by the different campaigns, and the whole presentation was also very exciting for us as presenters, with so many great campaigns coming from our member organizations.

At the end of the first day, Andrea was in a Q&A session with all the candidates for the AC, where she had to answer questions from both the YFJ board and from various participants at the COMEM. After the crossfire of questions, Andrea could leave the session with a feeling of having of answered the questions in a clear, simple and specific manner, without promising the world. That impression of her performance was highly felt by the other candidates and participants in the evening dinner (read: lobby) event at a casual-hipster dinner spot in the eastern area of Brussels called Sablon.

Tired but excited to the end, we entered the second and last day of the COMEM. The day started out with the elections and all member organisations could cast their vote. Nervous, but feeling we did everything that was in our power to ensure Andrea’s election, we went to a pleasant lunch, before walking back to the conference room. And there in that moment – after all the work during the weekend, the relief could finally settle in, when it was announced that Andrea, as IFLRY’s nominee, was elected to the Advisory Council on Youth for the Council of Europe! What a journey – and what an result! Now IFLRY has once more the opportunity to advocate for the freedom and rights for young people across Europe. Congratulations Andrea – and IFLRY!