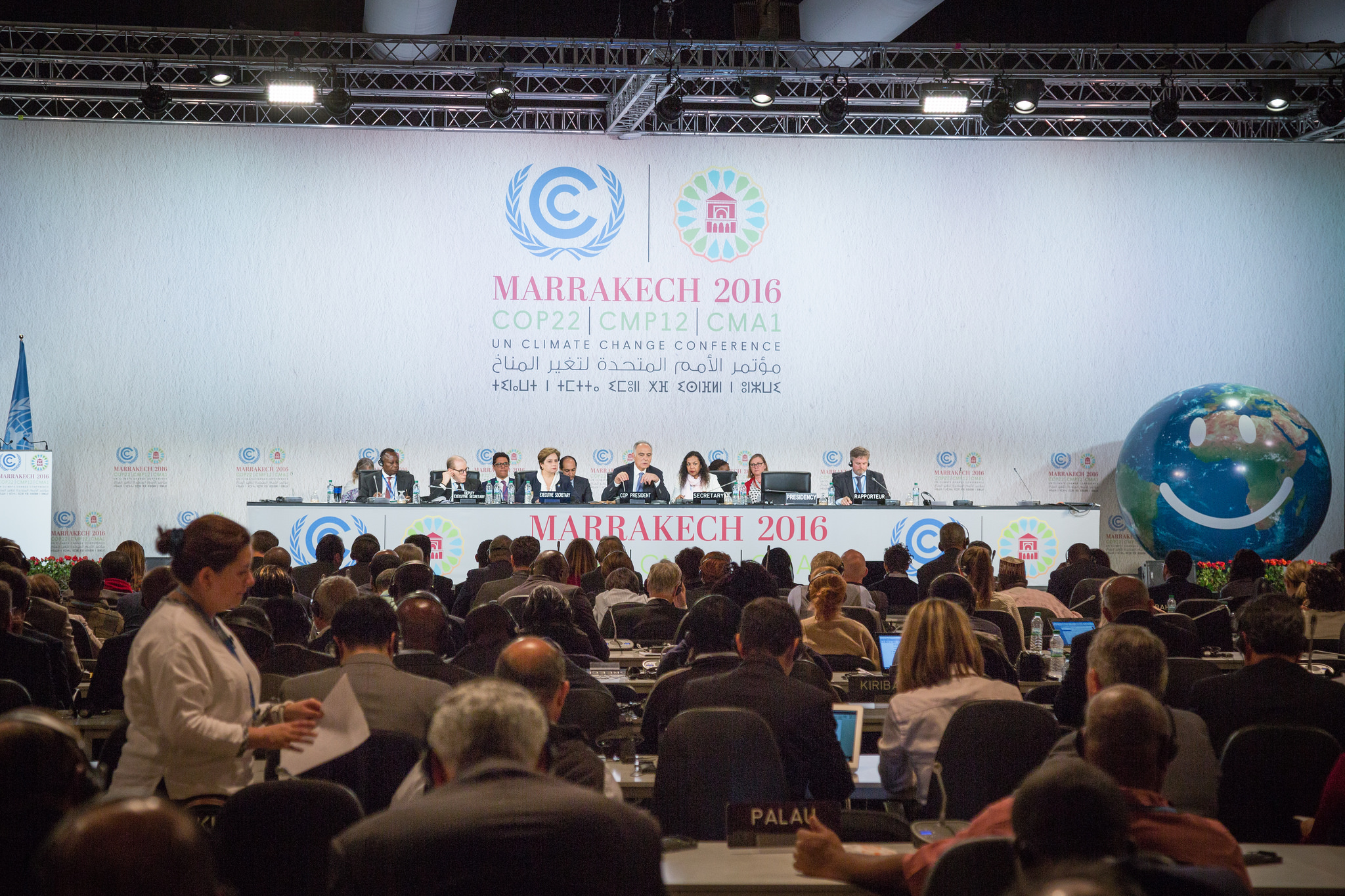 Dorien Lugt (Netherlands) and Jonas Hall-Andersen (Denmark) were on IFLRY’s delegation to the UN Climate Change conference (COP22) in Marrakech this year. What follows is a report on their overall experiences.

It is easy to get lost in the small streets in the old town in Marrakech, where the streets are filled with scooters, bikers, people grilling fish or selling screwdrivers, cigarettes and bracelets. Arriving at the conference the first day, we had a similar feeling. While various negotiations take place in ten different rooms, there are hundreds of side events and workshops organized by institutions, companies and countries. But as confusing as the old town and COP can be initially, they are just as just energetic and lively,once you start to find your way.

During the opening of the COP22 on Monday, we heard King Mohammed VI of Morocco and the minister of Foreign Affairs Salaheddine Mezouar speak about the importance of climate change for Morocco and Africa in general. The COP22 was nicknamed the COP of Action, as this year’s negotiations were all about implementation of the Paris Agreement. Discussions are more technical than political, with a focus on verification measures and finance. You can read more about these negotiations in our article on climate finance.

In Paris, countries agreed to keep the global temperature rise below 2 degrees and try their best to keep it below 1.5 degrees. The agreement has entered into force within a year after Paris, on the 4th of November, a few days before the COP22. For the agreement to enter into force, at least 55 countries responsible for 55% of the global emissions had to ratify it back home. For comparison, the Kyoto Protocol entered into force 8 years after it was signed. A reason for the fast entry into force was that countries wanted to ensure the agreement was safe before the US elections on the 8th of November. The election of Trump during the conference dominated discussions but didn’t temper the energetic vibe during the conference. Many countries responded immediately that they would increase efforts if the USA would not keep its promises and China reached out to urge Trump to stay involved in the common battle. We explain more about the influence of the US elections on Climate Change in another article. Other positive news came from the side of Germany, presenting its Klimaschutzplan 2050, or Climate Action Plan 2050. Germany promised to reduce CO2 emissions by 80-95% by 2050 and wrote a detailed roadmap for the transport, energy, construction, agriculture and industry sector on how to achieve that goal. We wrote another article on Germany’s Klimaschutzplan 2050, which can be found here.

At the conference several civil society groups are being represented in constituencies, with YOUNGO being the youth constituency. YOUNGO comes together each morning and discusses interventions made from by youth at the COP. There are working groups formulating the perspectives of youth on topics such as finance, adaptation and mitigation. Dorien joined the working group on Action for Climate Empowerment (ACE), about raising awareness, education and public participation on Climate Change. These topics are often not a priority in the climate change policies of national governments, but are very important to ensure that climate change gets higher on the agenda and will stay there for the next generations. With this working group we spoke to many country delegations about their activities on ACE. Doing so, we noticed the people responsible for ACE on a national level were eager to hear what other countries did in this field. This inspired us to invite the delegates for a dialogue on best practices and challenges within their countries. A video-impression of this workshop can be viewed below.

The events and all the people we met, made attending the COP22 a very inspiring experience, which has convinced us even more of the importance of the topic. There are so many ways to contribute to the transition to a more sustainable world, on different levels and in different fields, from science to policy, from activism to engineering, from financial to social issues and from a local to an international level. Many people are working on it now and many more people should get engaged, in whatever way suits them best.