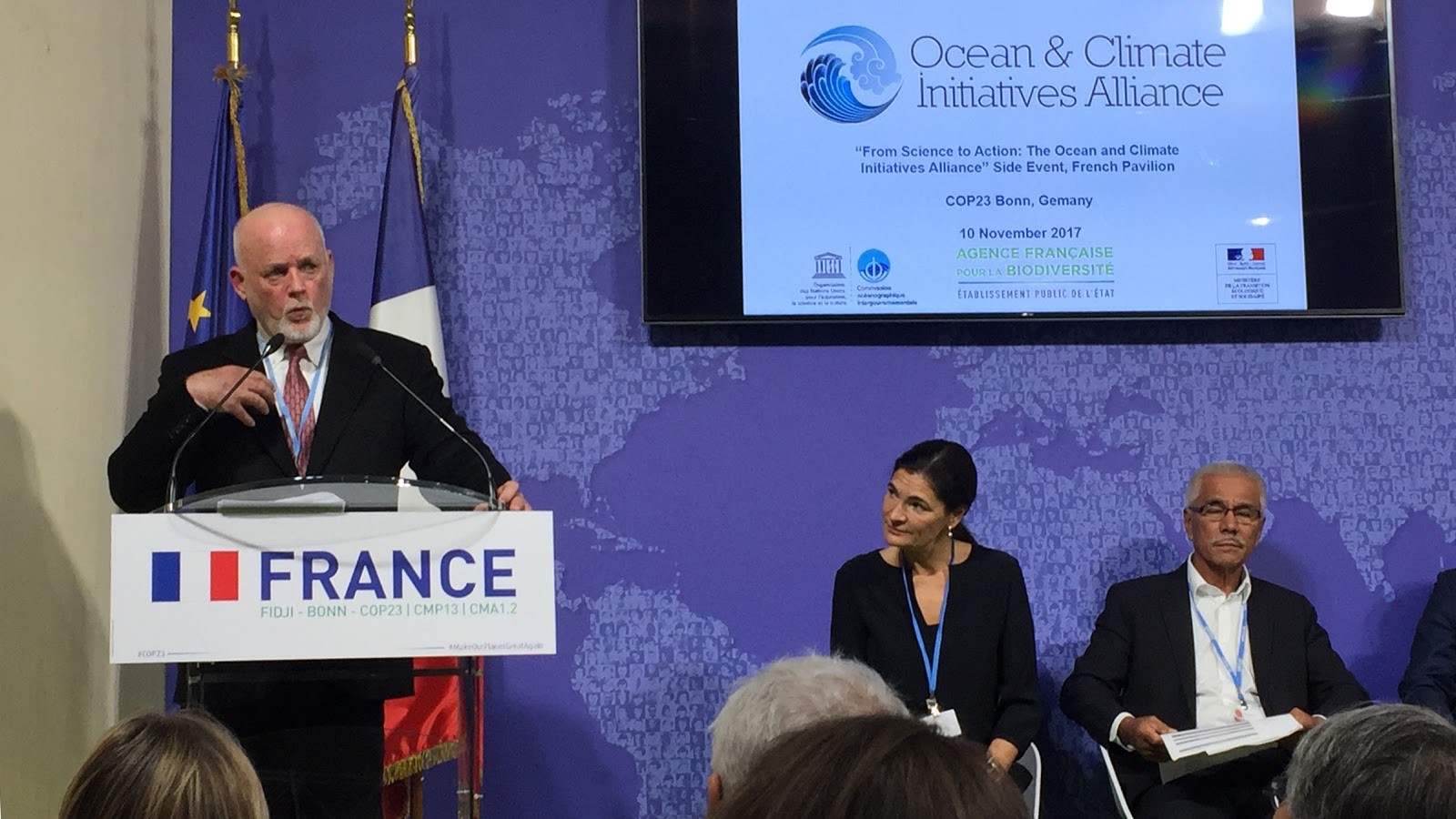 Peter Thomson, UN Special Envoy on the Oceans addresses an audience at the French Pavilion at COP23 on behalf of our oceans.

Oceans play a crucial role in the regulation of the earth’s climate. That is why Melvin John & Ina Djuren, who attended the first week of COP23 on behalf of IFLRY, used the conference to get deeper insights into the subject.

The ocean is our biggest climate regulator and an important carbon sink. Due to climate change the known problems are even getting worse and new problems arise. With the hurricanes that raged in the Atlantic this year, we have already seen the effect of extreme weather events on coastal regions. But these aren’t the only ocean related problems that arise as a result of climate change. Rising sea levels, ocean acidification, coral bleaching, decreasing fish stocks and coastal erosion are all connected to rising temperatures.

The Fijian Presidency at this years Conference of the Parties (COP) highlights not only the problems the Small Island Development States (SIDS) are facing, it also encourages to focus on oceans and coastal areas. Furthermore, the first UN Ocean Conference took place in New York in June, and the Our Ocean Conference was held in Malta in October. The Intergovernmental Panel on Climate Change (IPCC) is working on a special report on the Ocean and Cryosphere in a Changing Climate.[1]

The oceans are finally getting the attention that is so urgently needed to encourage action.

When looking at the Nationally Determined Contributions (NDCs) from different countries to see if and in which regard they are recognizing the importance of the oceans, it is striking that Australia, Brazil, the EU, Micronesia, New Zealand, Norway, the Russian Federation and the USA are not mentioning oceans at all. Nevertheless, most of the countries excluding oceans from their NDCs are landlocked nations. Among countries that include ocean in their NDCs the top priority is given to adaptation, not ocean mitigation.

The important role of our oceans gets recognition in Sustainable Development Goal 14 (SDG 14) on oceans and seas, but oceans are only mentioned once in the Paris Agreement. “It’s a no-brainer” said Taholo Kami, Fijians Special Adviser for Pacific Partnerships and International Civil Society. That is why Fiji will launch the Ocean Pathway Partnership (OPP) at COP23 and is using it to “raise the bar on oceans as far as possible by 2020”. Besides setting the context about the important relationship between the oceans and climate change and creating a continuous momentum that lasts beyond COP23 the goals of the OPP are:

The OPP is a call for action on an international level and has a strong focus on partnerships and collaborations. It addresses representatives of parties and stakeholders – observer organizations, CSO, private sector, academic and sub regional governments, established ocean and climate alliances, coalitions and platforms and also donor partners.[2]

Kami is optimistic about the launch of the OPP during the second week of COP23 and he has reason to be: The OPP gets a lot of recognition during side events by several parties. Members of the YOUNGO Oceans working group talked to many stakeholders and the interest in a meeting on this topic raised so much interest that Kami organized a slot at the meeting room at the Fijian Pavilion where the YOUNGO group was able to present the OPP.

YOUNGO is the official youth constituency at the United Nations Framework Convention on Climate Change and started this working group at COP21 in Paris, because they were surprised how little the ocean was taken into regard within the UNFCCC.

In addition to Fiji’s engagement for the OPP, the oceans and related topics like displacement, loss and damage, adaptation and others play an important role in this year’s discussions. Climate change has become a matter of life and death for many people – many lives and livelihoods are at risk and some of the SIDS can’t be saved even if we’d reach zero emissions tomorrow. That is why we do not only need to talk about cutting emissions at the COP, but also about the damage that is already showing.

In several side events those affected by climate change raise their voices for climate action. One of them is Anote Tong, the former president of Kiribati, an island that has bought a piece of land on the Fijian Islands, because their island can’t be saved. He still faces denial in his own country and complains that policy doesn’t address the problem, the urgency and the package needed for those for whom it is already too late: “We’re still talking emissions. (…) It is about finding a way of survival.”

Peter Thomson, the first UN special envoy on the oceans is the one who offers hope: “We have a plan.” This plan is implemented in SDG 14 – the only trouble is, that we have to accomplish the goals by 2030: “Enough with the talk – this is implementation phase.” Thomson is also one of those who fully recognizes the importance of the OPP, for him it’s essential.

The importance of the ocean topic is not only shown by the several side events on the topic – it’s also highlighted by the Oceans Action Day. The Oceans Action Day on the 11th of November had a close look at concrete actions and commitments with a special attention to SIDS, linkages of actions with NDC implementation and revision process and specific requirements for capacity building. Again, several speakers came together to raise their voices for not only climate action, but ocean action.

Among the speakers were:

Manuel Barange, FAO: “The world cannot defer the time for action any longer.”

Inia Seruiratu, Fiji’s high-level champion for climate change action: “National governments can’t address the problem on their own.” He calls for partnerships and highlights the OPP.

Ronald Jumeau, Ambassador and Permanent Representative of Seychelles to the UN, thanks Fiji for “helping the ocean flow into the negotiations” and offers an example of action from the Seychelles.

Enele Sopoaga, Prime Minister of Tuvalu highlights the serious situation for the Pacific Islands and points out that people displaced by climate change are no refugees and deserve a proper framework which protects their rights.

The speakers agree that displacement and migration are the last resort and that, when people have to move it has to be with dignity.

Peter Thomson points out that the “ocean is in deep trouble”, but offers hope (see above).

At the end of COP23 we’ll see, if Fiji was able to implement the OPP. And let us not forget that each and everyone can do his/her part to tackle climate change. It’s time for ocean action!

Ina Djuren is a member of the IFLRY Climate Change Programme and the YOUNGO Oceans Working Group. She has a background in banking and will finish her master studies in architecture in Münster, Germany next year. The topic of her thesis will be ‘Climate Change: The Case of Fiji’. Contact Ina at ina.djuren@gmail.com