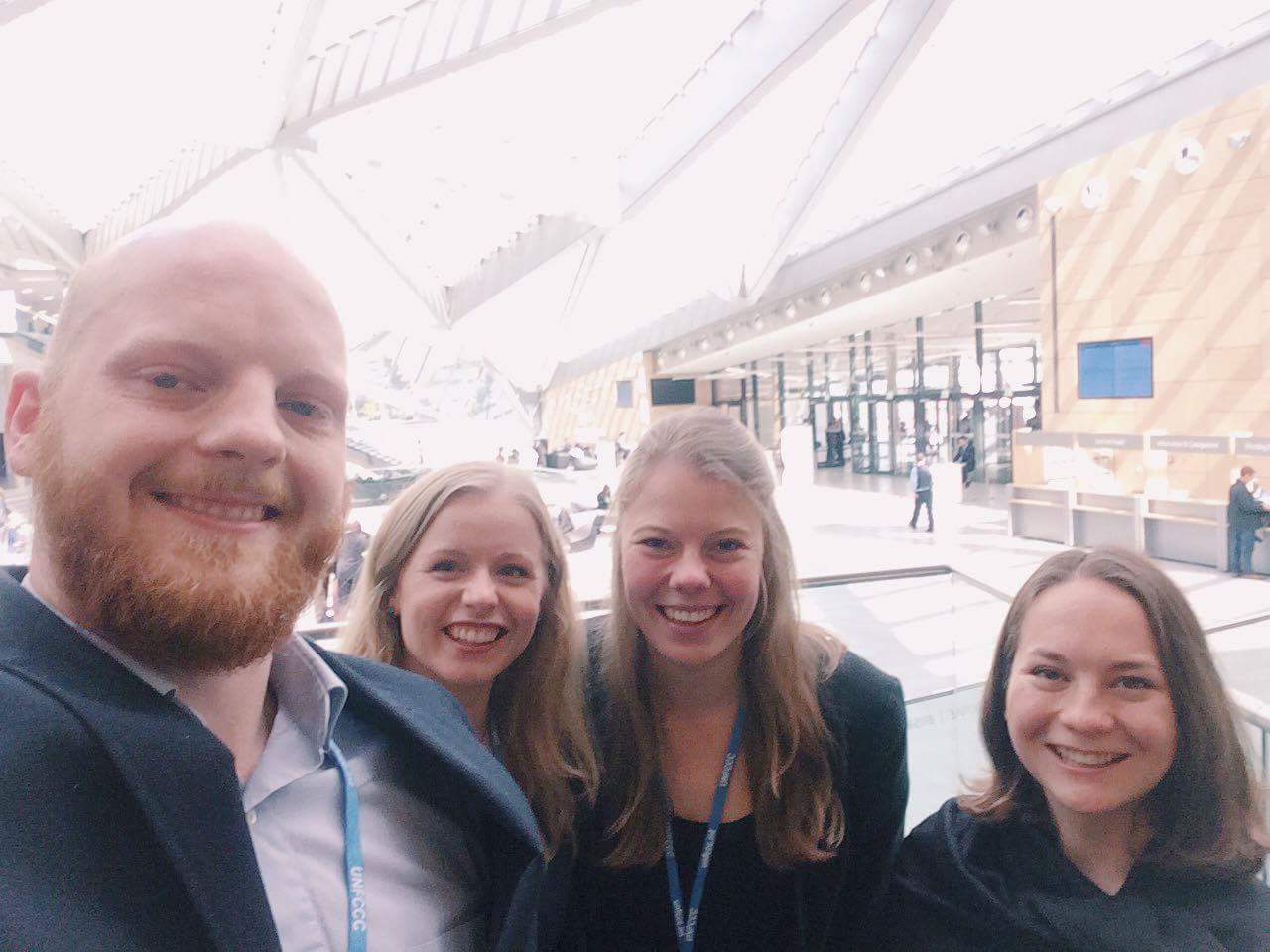 IFLRY's delegation for week one of SB46. From left to right: Gerard Peltjes, Tone Bjørndal, Carmen Vermeer and Emma Tcheng.

Over the past two weeks, the international policy, scientific and NGO community came together at the World Conference Center in Bonn, Germany, and participated in the SB46 (Subsidiary Body 46) of the UNFCCC. A delegation of IFLRY had the privilege of observing these pre-negotiation meetings, which seek to serve as the foundation for the Conference of the Parties 23 (COP23) that will occur in November 2017. During this event, delegations from all corners of the world gathered to negotiate the impacts of climate change and necessary future policies of adaptation and mitigation. Civil society, researchers and other non-state actors were principle in monitoring the developments. Throughout the conference, SB negotiations took place in three different areas: Subsidiary body of Implementation, Subsidiary Body for Scientific and Technological Advice and the Ad Hoc working group on the Paris Agreement (and yes, they do love acronyms).

There are different agendas for negotiations for the SBSTA, SBI and APA. Many negotiations are closed sessions, but luckily many side events are organized that are used to discuss and present developments in climate change policies from a variety of perspectives. Our delegation decided to divide the events based on our various fields of interest, while also participating in the activities organized by YOUNGO, the network that represents youth organizations at the UNFCCC. Emma Tcheng focused on climate change related to the empowerment of women and enhancing human rights. Gerard Peltjes joined sessions on energy and innovation as well as technical expert meetings. Carmen Vermeer participated in events related to transnational networks and implementation of climate change policies. Christian van der Woude and Liz Radtke joined in on the second week of the negotiations, taking in many side events focused on financing for climate change and development, as well as YOUNGO proceedings.

YOUNGO is one of the recognized constituencies by the UNFCCC and creates the opportunity for young people to be included in consultations with non-state actors by the Subsidiary Bodies. We were therefore able to join meetings with high representatives of the UN like the chairs of SBI, APA, and the Executive Secretary of the UNFCCC, Patricia Espinoza. For instance, on the last day of the first week of proceedings, the Deputy Secretary General of the UN, Amina Mohammed was present, where she mainly stressed the importance of local implementation and cooperation in climate change efforts.

Throughout the course of negotiations and meetings, our team was especially inspired by the multitude of intelligent, driven and diverse women present, who held both chair positions and were party and NGO participants. Especially when analyzing the disproportionate impacts climate change have on vulnerable populations – including women – it was inspiring to see SB46 support and empower female leadership in negotiations.

During these consultations, a topic oft-raised was various conflicts of interests (meaning the difference between the private sector interests and the climate change goals) and the urge to put that issue on the negotiation agenda. However, during the second week of the conference, Liz and Christian observed several meetings that focused on blended finance techniques and integrating the private sector into climate change negotiations. It is imperative that the international community integrates the power and innovation of the private sector to help member states reach their NDC’s (nationally determined contributions), thus impacting the viability of achieving the SDG’s. Many state actors and NGO representatives stressed the importance of this technique.

YOUNGO is very much in its infancy as an organization, meaning that is not part of one of the subsidiary bodies, namely Action Climate Empowerment (ACE). ACE consists of six pillars but is summarized most easily through its goal to empower young people through access to information, education and raising overall awareness on climate change topics. During the first week, the working group on ACE successfully lobbied different delegations to push for national ACE focal points in every member state. In the second week of the conference, the 5th annual ACE dialogue occurred, where prominent state actors and leaders in education fields came together to discuss the importance of education in climate change mitigation and adaption efforts. For example, if we were to educate young children on the importance of our climate, through bolstering efforts in physical activity and cognitive development, we are more likely to observe a fall in car usage and excessive carbon emissions in the future.

One of the main themes discussed – especially in the second week of the conference – was the importance of adaptation versus mitigation of climate change. How are we able to adapt to the impacts already felt by climate change? Dually, how can we also mitigate and prevent future risks from arising? Unfortunately, the international community has come to terms that climate change has already negatively impacted many states; the Mauritius islands, Fiji and other island states are observing historic rising water levels, which is impacting their ecosystems and economies. The Bonn conference has therefore placed a higher priority on adaptation efforts, since we now need to minimize the impacts of climate change.

The SB46 talks were also – albeit unfortunately – dominated by the current policy proposal of the United States: altogether withdrawal from the Paris Agreement. If this were to occur, the entire SB and COP negotiation process will literally have to start all over again, unless other countries are able to fill the gap the US will leave behind. In response to these talks, YOUNGO organized a symbolic action, where an orange elephant was approached by other animals, which symbolized the gap that needs to be closed by other countries.

SB46 was an action-packed two-week conference, where IFLRY delegates were extremely privileged to attend and interact with global leaders and other international youth. It is undeniable that, if not attacked right away with certitude, climate change will irrevocably impact the future of our planet. SB46 sets a precedent for future COP conferences, and will now be at the helm of achieving sustainable and progressive climate change policies, that will help not only in alleviating climate change pressures in all countries of the world, but help in achieving the SDGs, UN 2030 agenda, and in including the voice of youth in future negotiations.