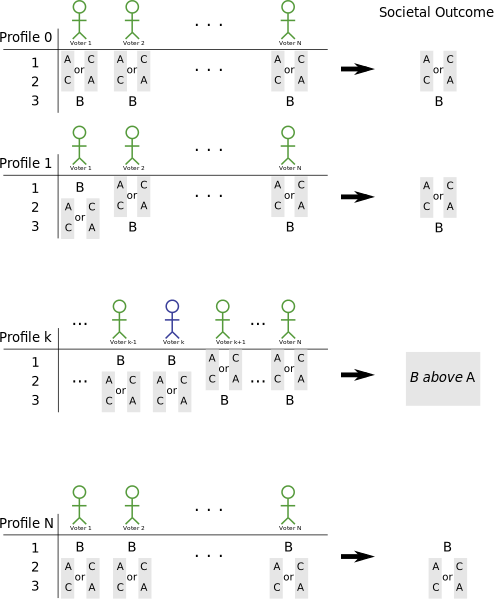 Let’s pretend that you think our voting system sucks. You think plurality-rule, first-past-the-post, winner-takes-all elections lead to dirty tactics and partisanship. You hate when candidates whom a majority voted against wins the race anyways. (Seems impossible? Imagine a candidate wins 40% of the vote while the remaining 2 gets 30% each. The 40% candidate wins even though 60% would prefer someone else.)

Surely, we can do better, you dream. Surely, there is a better way to vote.

The good news is that you’re right. Evidence seems to suggest that plurality-rule does indeed devolve into a two-party system. There are, indeed, more robust voting systems than first-past-the-post. Unfortunately, we won’t ever get a perfect voting system. This is probably the case. We have Kenneth Arrow and his impossibility theorem to thank for that.

To explain Arrow’s Impossibility Theorem, we must clarify what is meant by ‘robust voting system’; it is a voting system that satisfies a number of desirability criteria. You are encouraged to come up with your own, but here are a few that many people seem to agree on.

Non-dictatorship: This seems like a low-hanging fruit, but just to be clear – a dictator is someone whose preference is the outcome of the vote, regardless of any other voter’s. We prefer our voting system to not have a dictator.

Independence from Irrelevant Alternatives: Our system should rank any pair of candidates based solely on voter’s preference between them. In other words, what voters think of any other candidates shouldn’t matter as far as these two are concerned.

Unanimity: If everyone prefers one candidate over another, the system’s ranking should reflect this. It wouldn’t be much of a system if it doesn’t convey something every voter already agrees on.

With some criteria laid out, let’s see how some of our usual voting systems hold up. Imagine a popularity contest between 3 people amongst a group of 7 friends whose preferences are as follows:

First-past-the-post: In this familiar voting method, we will forget the 2nd and 3rd row and limit ourselves to people’s first choice. Counting the score, we see that Hera and Aphrodite are tied at 3 votes each. No one has a plurality, so there isn’t a solitary winner. Some other tie-breaker must be performed.

Instant-runoff: Now things get fun. Instant-runoff picks up where first-past-the-post left off. In the event of a tie, we look for the candidate(s) who got the lowest score – Athena, in this case – and remove her from the race. With voters’ preference shifted, the score is recounted; repeat as necessary until no more ties remain. For us, since Athena has the fewest 1st choice votes, we look at her voters’ 2nd choice instead, which allows Aphrodite to take the contest.

The instant-runoff is superior to First-past-the-post because its simplicity can account for people’s preference beyond their first one. It also occasionally breaks ties, as seen here. Still, additional candidates – even ones that have no chance of winning – can seriously affect the reshuffling order and process. Instant-runoff is also non-monotonic, creating weird circumstances where voting for candidates can possibly harm them instead.

The Borda Count is superior because it allows candidates with mass appeal to win elections even if they don’t rank first; such a candidate is likely to be an acceptable compromise by many voters. However, it can also lead to candidates who win a plurality (or even majority) to lose the election. Borda Counts are naturally dependent on irrelevant alternatives.

There’s much to be said of such a winner; unfortunately, one of those statements is that there often isn’t one. It’s surprisingly common for Condorcet methods to have a tie, and tiebreakers are essentially a tricky way of delaying the question of a robust voting system down the line.

Dictatorship: What’s this even doing here? Dictatorship is clearly bad, right? Despite our misgivings, “one man, one vote” is an actual preference resolution schema with concrete advantages. Specifically, dictatorships meet the criterion of universality, unanimity and is independent of irrelevant alternatives. Unfortunately, it’s also a dictatorship. As an example, if Zeus is the dictator, then the winner of the popularity contest will be Hera.

So, we’ve gone through several voting systems and all of them have some glaring weaknesses. Can we do better? Are we just waiting for the right system to be figured out? The prospect seems bleak, but come back next time to see why some economists have said that “the only voting method that isn’t flawed is a dictatorship”.