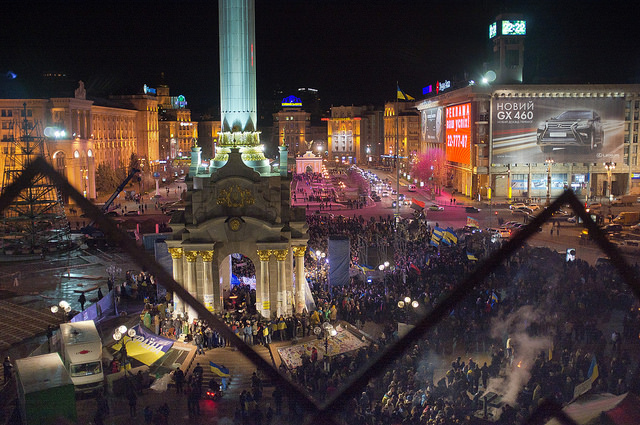 Beginning of the 2013 protests in Kyiv, Ukraine. Photo by: Visavis

Ukraine, the largest country in Europe, gained its independency from the USSR in 1991. It is undebatable that the country is still going through a difficult transition period from a Soviet republic to independent and powerful state, following significant changes towards grass-rooted democracy and a free market economy. n their annual democracy rating, US Government funded NGO Freedom House assessed the quality of the democratic processes in Ukraine. In 2016 it marked it as a transitive democracy.

No wonder that there has been a lot of skepticism arising outside the country. For example one year ago, the Netherlands voted against the EU Ukraine Association agreement in a national referendum. However, the latest news is speaking loudly of a new  visa-free regime deal between the EU and Ukraine, allowing Ukranian citizens to travel freely to the  Schengen Area. This clearly shows that Europe has ambiguous views towards Ukraine.

Undoubtedly, a lot of factors contribute to the situation in Ukraine. Internal issues include a hybrid war in Eastern Ukraine, a long-existing corruption problem, economic crisis and fragile political system. There are way too many things that need to be changed to make the country a stable liberal democracy, but Ukraine is passing all of the challenges step by step and moves forward by implementing important reforms.

However, there is a crucial factor that should be taken into account when making assumptions about the country’s future: the force that was able to unite and overthrow the first totalitarian sparks when they were about to happen. And that force is the Ukrainian people. How do they see their land today, and are they ready to be accepted into the EU?

Our attitude towards government

The Revolution of Dignity in 2013-2014 has shown that Ukrainians don’t need a leader to start a rebellion and banish the president who proved to be unable to carry their will. On the other hand, the gap between citizens and authorities has become insurmountable and legitimacy of political parties and civil servants is weak. People don’t believe officials in charge have the power to change anything and a deeply ingrained corruption makes matters worse. This keeps society asleep in a so-called political apathy.

According to a new survey published by the Foundation of the Deminiaciatives at the Razumkov Center in December 2016, more than 61,7% of Ukrainians state that the country needs a new strong political leader. At the same time, not a single politician was deemed fit to do this job by a majority of those questioned. It is clear that there is no one in charge, able to represent the interests of the people of Ukraine at the moment. The recent publication of e-declarations and a matter of political prisoners in Russia, a conflict in the East and a number of local issues increase mistrust among Ukrainians.

One of the core values, the violation of which caused massive protests, is euro integration. Back in 2013, people believed joining EU was a necessity, but now society doesn’t seem to be so sure. Only 21.2% say Ukraine should become a member of the EU, with a high level of democracy and standards of living. 13 out of 100 assume the best future is about staying neutral, and 6.4% are certain Ukraine will be destroyed as a result of the Russian invasion. 74% of people state Russia has got a negative influence on Ukraine but admit there should be a compromise found for the sake of peace. Nowadays there is no clear idea on which foreign policy the country should adopt, and this is another matter tearing people apart. Concerning the hybrid war at the East of Ukraine, 77% claim that the occupied regions should be returned to Ukrainian control.

Future in black and white

As three years have passed, Ukrainians experienced a range of significant changes and not everyone stays positive. 43.4% are rather optimistic, 35.4% claim that Ukraine is about to face a major disaster. Some believe there is a risk of a civil war. The reasons for such ingrained disagreement among Ukrainians are not only about the Russian as a second language issue  or EU integration. There is also a clash of “old” and “new” values which can be observed everywhere in society, including even education and health care. It is obvious that deeply rooted views do not stand up to a real-life scrutiny. Meanwhile, the adverse environment is reaching its peak, and citizens of Ukraine show a tendency to stop fighting over moral dilemmas to begin solving issues on their own.

And for the near future

The recent social polls show that 86 out of 100 people say that Ukraine should move towards democratic processes. And the population appears to start stepping out of the shadow. An analysis of Facebook content published by Ukrayinska Pravda in 2017 concludes that users are currently disputing not only values, but also politics falls under the sights of constructive criticism. A new “modern” values, for instance, LGBT marches, do not act as a distraction anymore. Many Ukrainians have accepted “new” ideas or stay neutral, and if the things go as they are going now, soon there will be not a factor to divert attention from politicians – Ukrayinska Pravda expects. It is also true that a non-constructive approach has proven to be short-lived, and citizens show a tendency to unite. No matter how far Ukrainians are to a democratic nation, the old and corrupted government is surely lives its last days.

Alina Danilova is a student at Taras Shevchenko National University of Kiev majoring in Korean Language and Literature. She is a member of the International Affairs Department of the Liberal Democratic League of Ukraine.