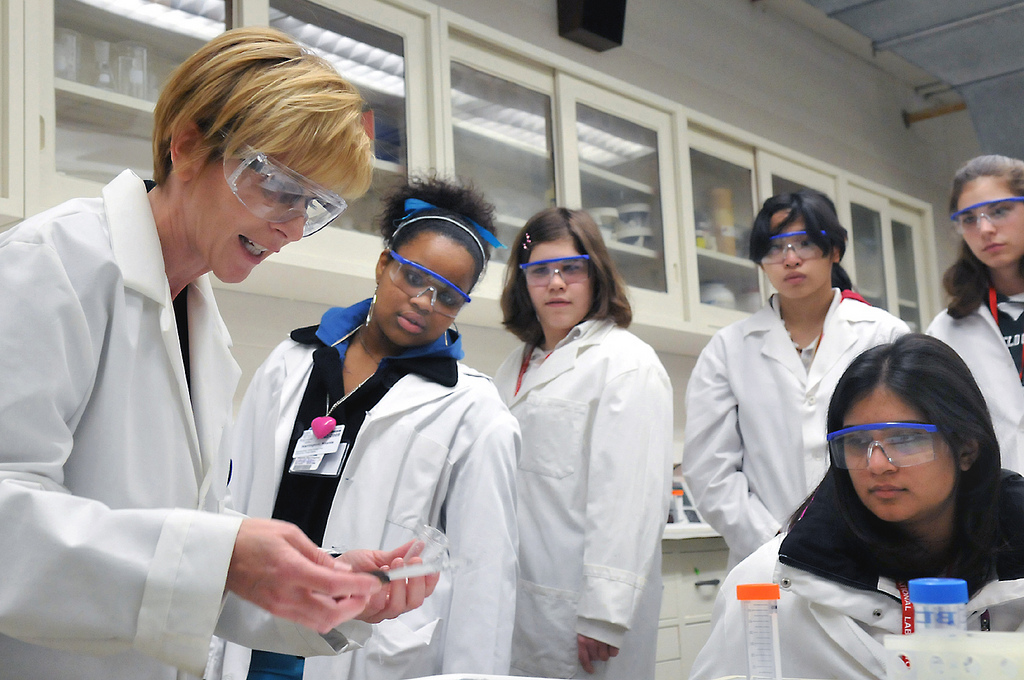 Women comprise roughly half of the U.S. workforce, but a mere 25 percent of women pursue careers in the fields of science, technology, engineering, and math (STEM).

This is troubling, especially when you consider that job positions in STEM fields are rapidly increasing in number. The cybersecurity profession–one of the United State’s most important and fastest growing fields–boasts a severe shortage in female talent, where 89 percent of the workforce in this area are men.

It’s a trend that is mirrored in a number of other industries across the United States, and it’s not due to women’s lack of educational attainment.

In fact, since 1982, women in the United States have earned 10 million more degrees than men. Today, women maintain a 60 percent majority in undergraduate classrooms, and over 41 percent of STEM PhDs are earned by women.

The real problem seems to be what happens after graduation. A study by the Center for Talent Innovation (CTI) found that women are 45 percent more likely than men to leave their career in STEM fields within their first year of employment. Of those surveyed, 80 percent of respondents say that they love their work, but many report barriers to advancement.

According to the CTI, many women reported a lingering “old boys’ club” attitude, where nearly a third of the leaders in STEM fields believed that women didn’t have what it takes to ever reach a top ranking position in their company. These women also reported having to deal with long, unforgiving and inflexible hours that make balancing work and family life difficult if not impossible.

Additionally, the report indicated that women in STEM fields struggle to embody traditionally valued leadership attributes. Women are often perceived to be emotional or lacking impact, or on the opposite end of the spectrum, too controlling or cold.

“Women are forced to conform to a more specific or narrower set of standards around executive presence than men, and they don’t get useful feedback on how they might go about improving their executive presence,” the study highlights.

While individual companies have implemented programs to help bridge the gap in employment, a number of factors must be rectified before industries are able to reap the benefits of women’s employment. Perhaps the most impactful would be to address the lack of female sponsors in the STEM sector.

Sponsoring matters for women in STEM. According to the AAWU, sponsors are the most effective way for women to advance in STEM fields. In addition to serving as role models for women who are just entering the profession, sponsors use their social and political capital to promote women’s ideas, advocate for women to receive promotions, and help younger women make connections in the industry.

Given that isolation is such a real part of women’s day-to-day experiences in the STEM fields, sponsors and personal mentorship are a necessary function in helping women to feel that they’re not the “other” person in the room.

Another study entitled, Solving the Equation, affirms the idea that mentoring remains one of the best ways to recruit and retain women in these fields. While more research will be necessary to specifically pinpoint how sponsorship directly affects women in STEM, it’s easy to see how having a dedicated person in your corner could positively affect women’s workplace culture.

“Having someone in your corner who is willing to advocate for you is empowering,” Grace Handley writes. “It’s easier to believe you belong if you have a powerful sponsor who believes it, too, especially one who is willing to actively demonstrate confidence in you by using social capital on your behalf. Sponsors do much more than offer good career advice; by sticking their necks out for women in STEM, they are showing everyone that women belong in those fields. Sponsors can ease the psychological burden of being “the only one in the room.”

Unfortunately, although the benefits to both sponsorship and mentorship seem obvious, both remain rare, as there are so few women promoted to senior positions in STEM fields to begin with.

The fundamental reasons for women’s retainment and advancement in STEM fields haven’t changed in decades. Though women aren’t likely to experience overt sexism in the workplace, STEM culture remains a place where women are likely to be subject to gender based microaggressions that make it an uncomfortable environment to develop their career. This is why sponsorship should be a priority for companies who wish to harness women’s talent moving forward.