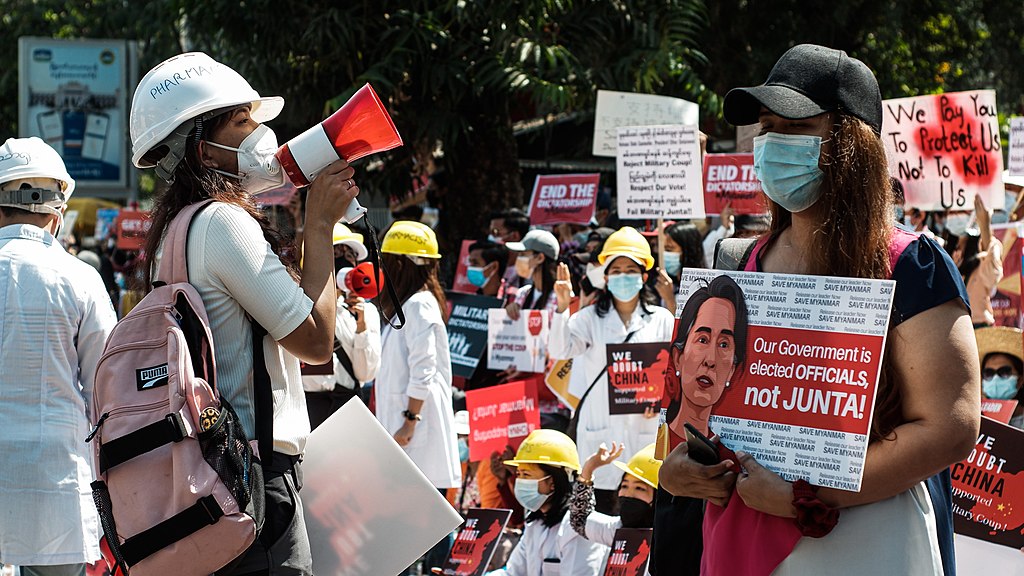 As you, my dear reader, probably know, a military coup took place in Myanmar in February. Although, you, just like me, might have been too focused on the latest updates following the controversies regarding the AstraZeneca vaccine to dive deep into the events. Which is, ultimately, what this blog post is about: the dangers of what I call the Covid-19 effect, where governments repeatedly fail to respond with any meaningful opposition to international crises as they’re too obscured by what is happening with the coronavirus. However, ever the optimist, I aim to present ideas on how this can be an opportunity to set a new precedent with regards to dealing with international crises. But, first we need to go back to that fateful day of February 1st…

On February 1st, the military seized control of the Myanmar parliament following the general election held in November, which the sitting president Ms Suu Kyi’s party, the National League for Democracy (NLD), won by a landslide. The NLD secured 346 seats out of 412, safely securing enough seats to form a government (Al Jazeera 2020). However, the election result quickly became subject to scrutiny as accusations over its legitimacy arose from the opposition, primarily by the Union Solidarity and Development Party (USDP).

The opposition accused the government of irregularities and widespread fraud, but failed to put forward any concrete evidence. Instead, its main point of critique regarded the disenfranchisement of certain ethnic groups, most notably the Rohingya. These groups are predominantly located in the outskirts of the country, which, as a result of Myanmar’s ethnically diverse population and history, is highly conflict prone (Crisis Group 2020). Fearing violence, Kyi’s government decided to cancel most elections there, thus invalidating millions of voters. The opposition argues that these were, in reality, neglected for political motives as they heavily impacted Myanmar’s minorities to vote – who are predominantly based in these regions. Ultimately, about two million voters in total were disenfranchised of a population of some 37 million voters (BBC 2020).

The military remained largely silent, despite its close ties to USDP, until late January when it made a public statement calling for the political dispute to be resolved or it would be forced to act. That day came on February 1st, when the military seized control over parliament and arrested senior NLD officials, including Ms. Kyi (BBC 2021). The liberal world, rightfully and unanimously, quickly condemned the shocking scenes.

However, this is where this story really begins, as at the time of writing, almost two months after the military entered the Myanmar parliament, opposition leaders are still being incarcerated, violence is reemerging as ethnic tensions have reheated, and protesters are being brutally suppressed (Amnesty 2021).

Meanwhile, the liberal international community has largely stood silent, watching, and neglecting their own ideals of the rule of law, democracy, peace and human rights. Thus, not only betraying the people of Myanmar, but their own population too. We cannot allow Myanmar to fall victim to the covid-19 effect, as our governments have become too narrowly focussed on their own management of the coronavirus to effectively mount any meaningful opposition to foregin wrongdoings. Some of the most notable examples of the covid-19 effect include Viktor Orban’s overhaul of the constitution in Hungary and China’s silent takeover of Hong Kong.

Instead, a swift, precise and effective response is called for. One that has learned from previous mistakes and that can effectively target elites, thereby minimizing the collateral damage sustained by the civilian population. The process ought to be twofold. First, the ethnic violence and government crackdowns need to stop. People are dying as a result of the renewed tensions following the election and the military coup and without peace, any attempt at democracy is pointless. We as liberals should call for the government to stop all violence. Second, the release of all political prisoners, most notably the senior officials of the NLD, and to allow for political organisation is crucial in establishing a peaceful order.

The government’s choice of violence originates from a desperate attempt to assert control and establish legitimacy. Since they are effectively fighting for their survival, they’re unlikely to give up control easily, which is why sanctions ought to be implemented. These sanctions must be more creative than of old; instead of forbidding certain products, we need to target key personnel within the military and provisional government, as to avoid hurting the civilian population. Only when the first criterias have been satisfactorily met can we start to hope for a democratic revival in Myanmar.

While the situation might seem grim, considering the lackluster results of previous attempts at similar offenses, there is hope. An odd combination of US and Chinese interests presents one way forward. China aspires to regain influence over the country it invested so heavily in, whilst the US seek to establish peace and reintroduce democracy. Thus, we should not discard this opportunity, even if it involves political collaboration with China.

Thankfully, we’ve become unaccustomed to military coups as they have declined significantly during the last decades. What was previously a common occurrence has almost fallen into oblivion. However, as the Myanmar case proves, dramatic government overturns still occur, which is why we, not just as liberals but as believers in democracy and human rights, need to act to do our part in reinstating peace and democracy. Let this be a template for other countries: for if democracy is overturned, there are consequences – even during covid-19.