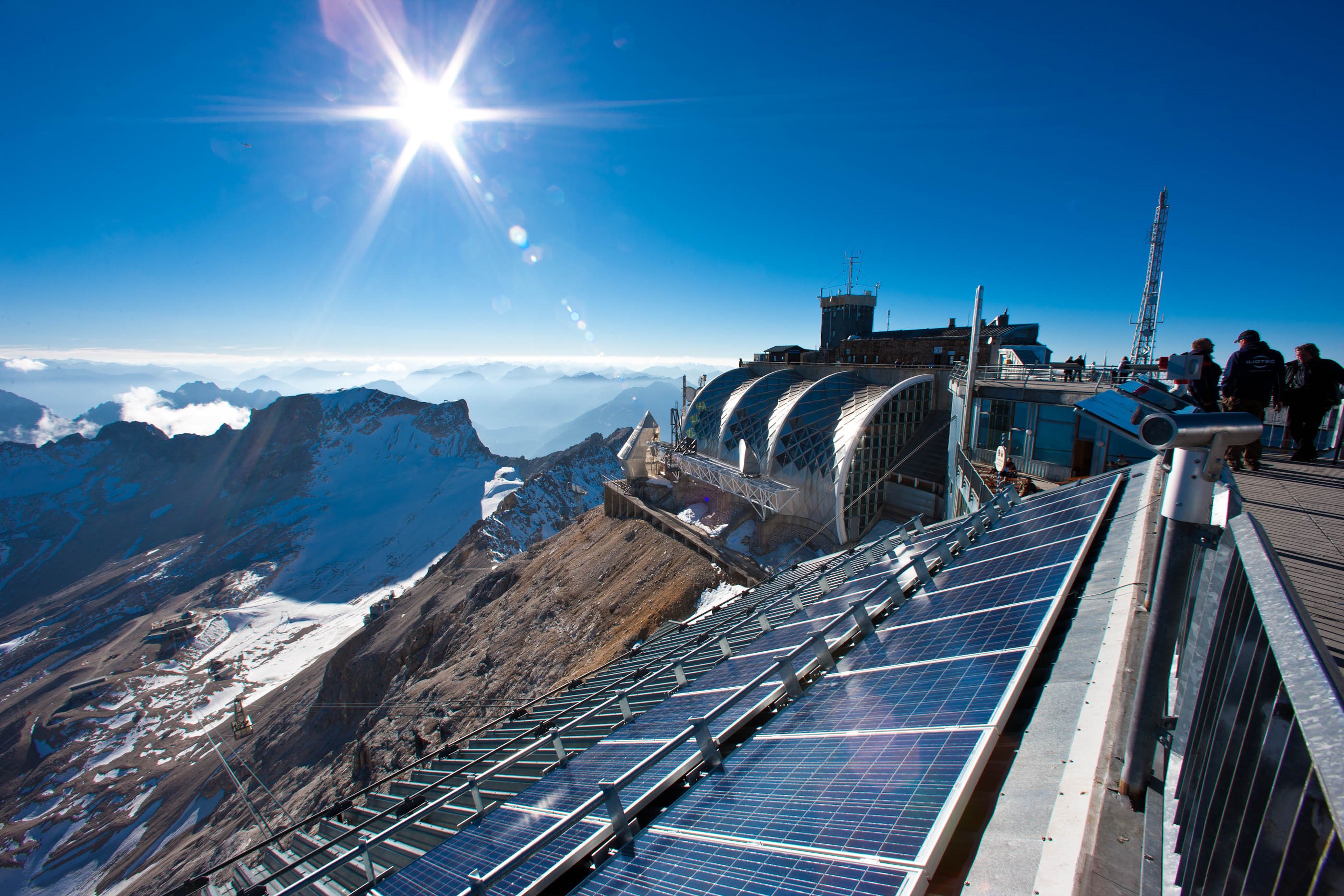 Solar panels on Germany’s highest peak - the Zugspitze in the Bavarian Alps.

This article is the second in a series by the IFLRY Climate Change Programme, looking at how different countries are implementing the Paris Agreement. An introduction to the series can be found here. 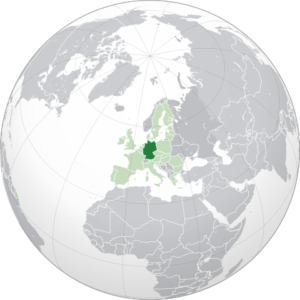 The Federal Republic of Germany is a parliamentary republic located in central and western Europe between the North and Baltic seas with a mainly temperate seasonal climate. Its capital is Berlin and it has a population of almost 83 million living in 16 different federal states. This makes the country the most populous state within the European Union. The country’s government is currently formed by a coalition between conservatives and social democrats with Angela Merkel acting as its head and Federal Chancellor since 2005. Germany’s head of state is President Frank-Walter Steinmeier.

During the final negotiations for the Paris Agreement in December 2015, Germany was one of the leading countries in the high ambition coalition advocating for a binding global treaty on climate change, strengthened by broad public support in the country. However, more recently, noted climate advocates such as Al Gore have warned that Germany is slowly losing its edge as a climate leader. Most importantly, it looks as though the government will fail to deliver on its 2020 climate targets. Almost three years after the signing of the Paris Agreement, and before the decisive Conference of the Parties (COP) in Katowice in December, it is time to assess the country’s progress on delivering on its promise to implement the Paris Agreement.

In the lead-up to COP21 in Paris, at which the Paris Agreement was negotiated, all countries agreed to submit their individual pledges – the so-called Nationally Determined Contributions (NDCs) – in which they set out their emissions reduction goals that would contribute to curtail the consequences of global warming. Germany, as part of the EU’s NDC as well as a major emitting country[1], committed to cut its emissions by 20% until 2020 and 40% until 2030 compared to 1990 levels. It has also given out a long-term goal of reducing its emissions by 80-95% until 2050.

So far, Germany managed to reduce its emissions by 32% compared to 1990[2] levels. Even though this fulfills the requirements of the EU’s NDC, Germany decided to aim higher: In its own climate action plans, the German government committed to reducing its emissions by 40% until 2020 and by 55% until 2030. After years of relative progress, reductions came to a halt in 2015 and 2016 when figures rose again despite progress in important sectors such as energy and industry.  Meanwhile, government reports even surfaced admitting that the self-proclaimed goal for 2020 will likely not be achieved.

There are several important reasons why Germany is set to fail its stipulated goals failing its role as climate leader. Even further, the country will also be unable to deliver on EU 2020 targets in sectors not covered by the bloc’s emissions trading scheme such as transport, housing and agriculture. Thus, what has happened to the former driver of ambitious targets and policies?

Current issues in the debate of mitigating emissions

Looking at the different sectors emitting greenhouse gas (GHG), in 2017 the energy sector accounted for around 35% of overall emissions; 33% of emissions were caused by the industry (7%), transport (19%) and agriculture (7.1%). 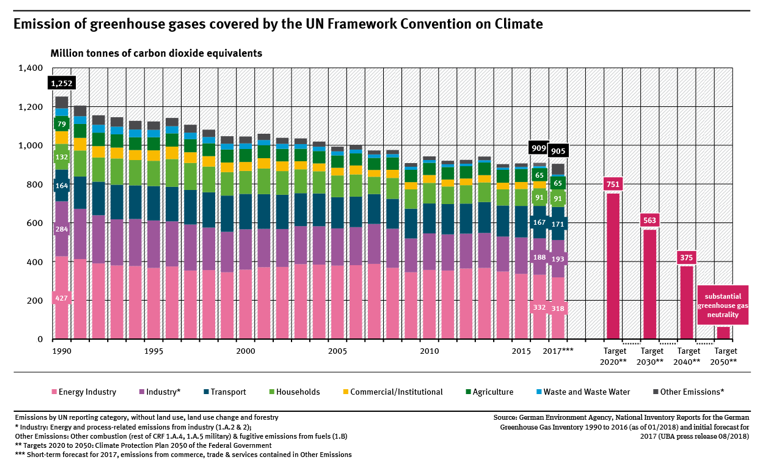 In this context, there are three main aspects shaping the public debate around mitigation:

First, the slowing clean energy transition is caused by concerns about electrical grid stability and complex and expensive network expansion measures. The government wants to prevent electricity price zones within the country, which would be unavoidable if the construction of electricity highways from the north to the south will not move forward in a faster pace. Much of the debate is focussed on expanding supranational grids, however, higher investments are also needed in local distributional grids that supply electricity to households.  Digitalisation remains key in this context to lower prices and increase efficiency.

Second, public debate also centres on a feasible date to phase out of coal. The newly installed coal exit commission, as part of the government’s 2050 climate action plan, will flesh out possible strategies for the future of this fossil fuel in the country. Experts agree that a decommissioning of at least the oldest and most inefficient plants would not affect the electricity grid’s stability as the majority of coal energy could be replaced by more efficient natural gas plants that currently aren’t utilised to their full capacity. Moreover, in order to reach the 2030 and 2050 goals, it is a necessity to send clear signals that Germany intends to move past the coal age.

Third, high energy prices put pressure on the government that could be even worsened by a coal exit: network charges have risen from around 19.4 Cents in 2006 to 29.4 Cents per kWh in 2018. Hence, Germany is one the EU countries with the highest energy prices. Main reasons are the feed-in tariffs for renewable energy, which increased significantly since its establishment in 2003. Furthermore, other surcharges, taxes, and grid fees remain major concerns for the country. Thus, there needs to be a reform of the current German Renewable Energy Act (EEG) and instead a focus on introducing a carbon tax whilst lowering the electricity tax.

Regaining leadership on a European level

Despite the challenges for the country’s mitigation efforts, Germany will achieve at least the medium-term goals set out in the EU’s NDC. However, the current government lacks a clear strategy and vision to reach the (still too weak) aims it gave to remain a role model in climate policies.

The government can only realise ambitious climate policies in the broader context European policies.[3] Additional reforms of the EU’s Emissions Trading Scheme (EU ETS) – e.g. even more far-reaching certificate reductions and/or a broader scope of the scheme – are needed to avoid a shifting of emissions from one country to another (so-called carbon leakage).

But the Merkel government remains hesitant in comparison to recent advances by the French President Macron on more ambitious European climate policies. However, an alliance pushing for more ambitious and effective policies on the European level is necessary to convince especially Eastern European leaders of the urgency of the situation.

Regaining leadership on a national level

As to the national level, Germany needs to further increase the share of renewable energy in its energy mix and at the same time phase out of coal as soon as possible. The price of fossils is tethered to commodity prices, which are inherently volatile. The price of renewables in turn is linked to technology costs that are continuously decreasing through investment in innovation.

While recently first renewable energy projects were realised without state subsidies, the government needs to encourage investment in clean energy without favouring one technology over the other. This could be achieved e.g. through putting a minimum price on CO2 emissions from coal and other fossil power plants. Projects have matured by now and there is no need to put the main focus on only subsidising green energy production anymore. It is now time to significantly increase support for all integral facets of the energy transition such as much higher investment in grid expansion and energy efficiency measures.

Regarding housing and transport, technological and regulatory innovation needs to be addressed encouraging more ambitious actions in future. Even more important to sustainably mitigate GHG emissions – whilst maintaining reasonable price levels – remains the so-called sector coupling. The aim here is to develop a holistic approach towards energy usage covering the transport, housing and industrial sector in order to guarantee the clean energy transition’s success.

Unfortunately, the prospects of the government realising the urgency of the situation are currently relatively bleak. The UNFCCC has made repeatedly clear that current pledges by the international community would by no means be sufficient to achieve the goals set out in the Paris Agreement. That is why the necessity for ambitious countries paving the way for others to follow is so urgent.

Hence, progressive forces need to unite advocating for climate policies that spur innovation, create sustainable growth and, most importantly, significantly reduce emissions. It would be an alliance that thinks beyond current party lines. Inaction will be costly — not only for us, but for generations to come.

[2] It should also be mentioned in this context that the country’s reduction achievements were not mainly because of ambitious climate and energy policies but were rather fueled by the breakdown of the GDR’s industrial sector after reunification of the two Germanys in 1990.

[3] An analysis of the EU’s NDC and the pathways for more ambitious and effective targets will also be part of this series of articles.