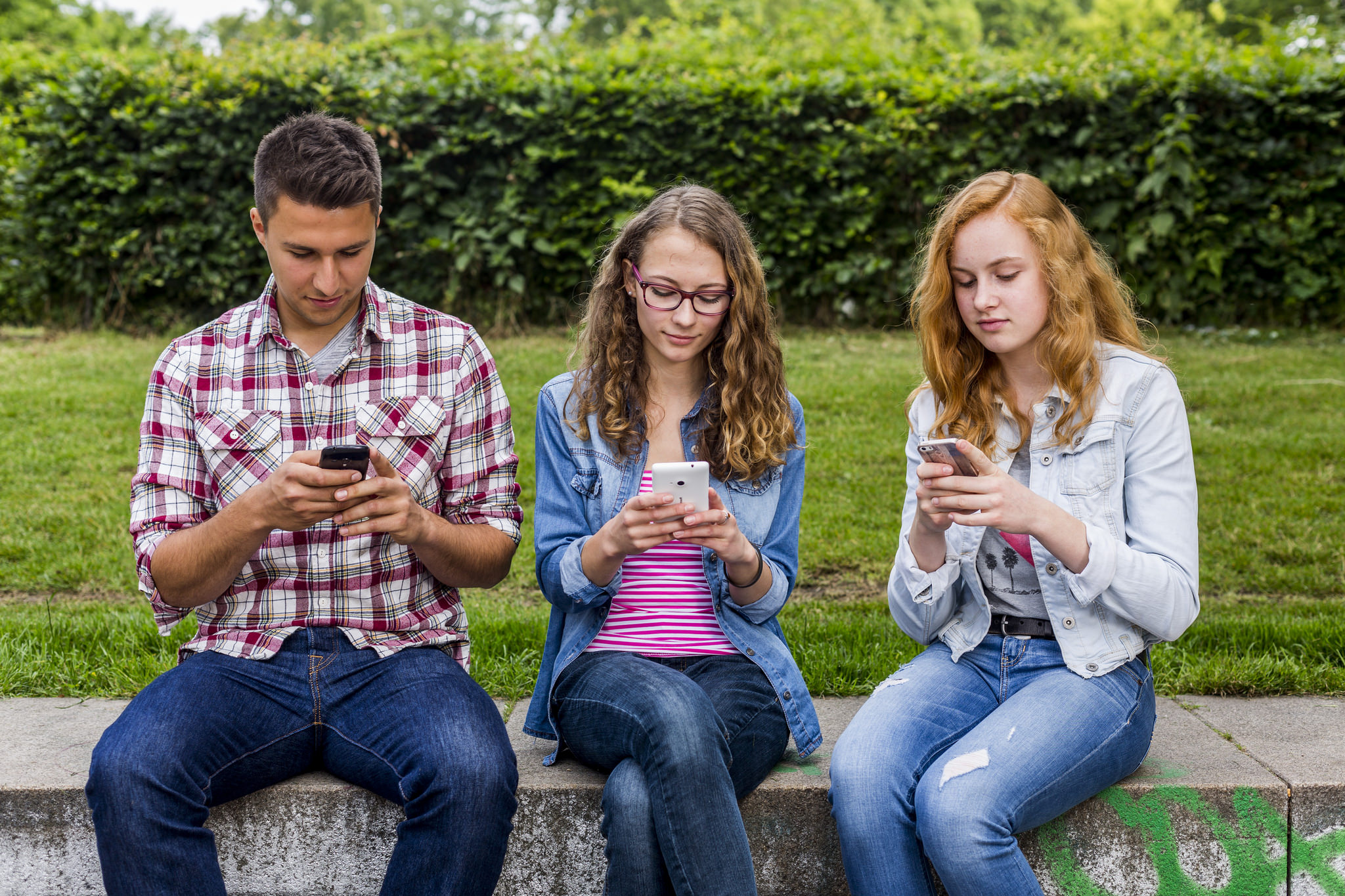 What do young people think and feel? Not only worried parents wonder about that, society does so too. Because of this, the SINUS-institute Germany tries to answer this question every four years. After they published this year’s results, there was a huge media response: “Germany’s well-behaved youth”, “Well-behaved and more Mainstream than ever before”, “Generation Mainstream” and “Strivers instead of rebels?” were just some headlines of articles that all emphasise one thing: Germany’s youth does not rebel, but adapts itself to society – one could almost say they have become boring.

For the survey the SINUS-institute did narrative interviews with 72 teenagers from age 14 to 17 last year.  In advance the teenagers gave written statements and their surroundings were documented. Besides the report, the study also produced the so-called SINUS-chart, which distinguishes between different milieus that German teenagers are part of. 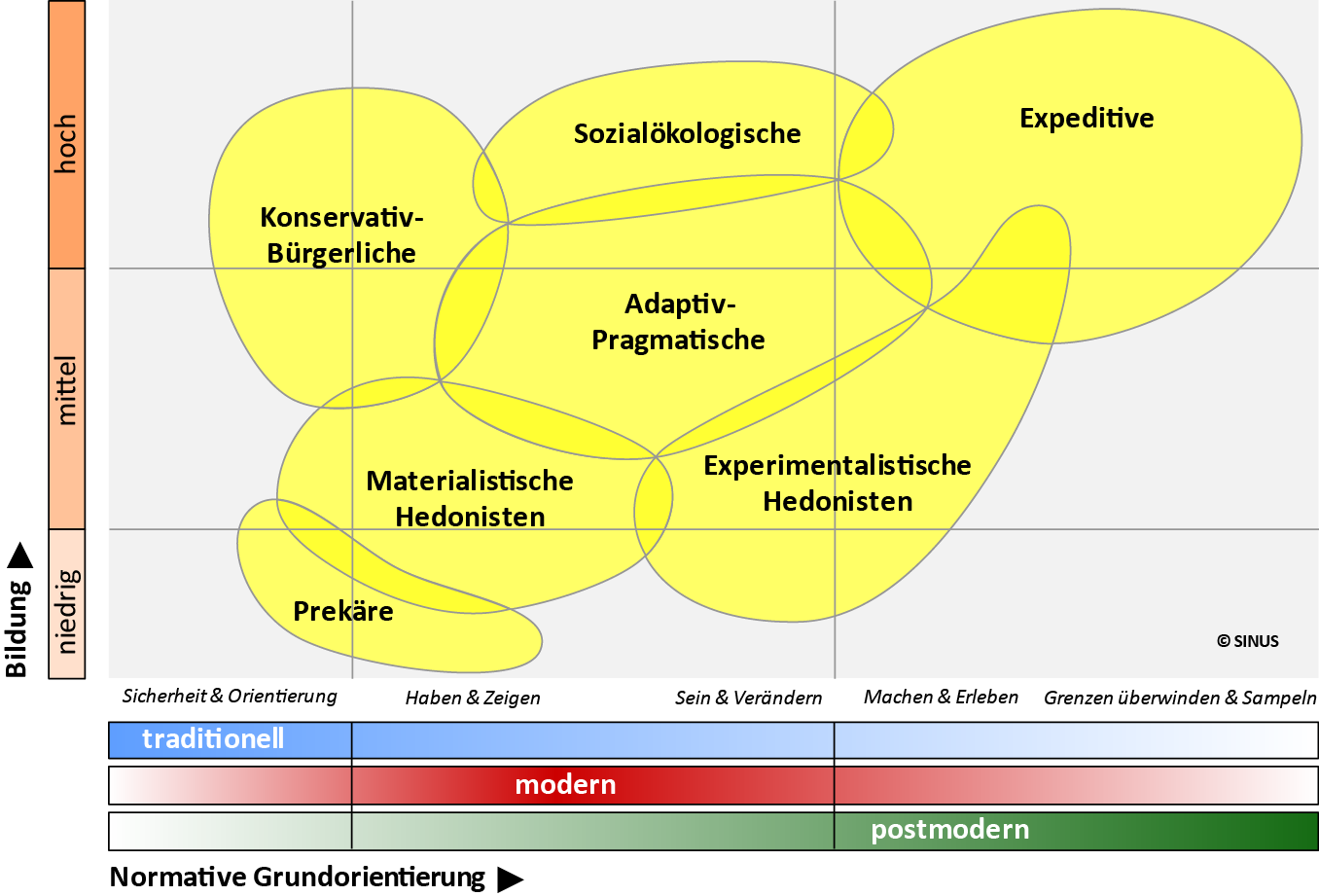 The different milieus are characterized this way:

Compared to the preceding study the milieus have not changed much. There are, however, differences between 2012 and 2016. With the term “neo-conventionalism” the study explains the phenomenon which is the reason for all these, almost derisive, headlines. Today’s teenagers are not eager to differentiate from their parents any more. While in the 1980s and 1990s specific youth cultures were serving identity development, they have become less important today. This trend has been observed for a longer time already, but the disappearing of the negative connotation of the term “mainstream” is new. Many teenagers desire to be accepted by a community. With this comes an acceptance of norms for accomplishments and secondary virtues, as well as an acceptance of the importance of social values like compassion, helpfulness, willingness to adapt and stable relationships.

This may surprise some people, but it corresponds with theses like the one from the German sociologist Ulrich Beck. He characterizes three dimensions of individualization in his model. The first dimension is the dimension of liberation in which the individual is released from traditional connections with authorities or breadwinners. We live in a time in which we are freer than ever before. But with this freedom comes the dimension of demystification. Traditional guaranties of instructional knowledge and leading norms are lost and because of their insecurity many individuals subordinate to new social forms or institutional constraints and abandon a part of their new freedom. This last dimension is called dimension of control and reintegration. Many teenagers are obviously willing to give up on some of their liberties and a part of their individualism to belong to a group. They do not have to adapt, but they do.

Apart from this very interesting aspect, the SINUS-survey delivers an insight into the attitudes of German teenagers on other topics. A majority of them believes in upward mobility, but opinions about its attractiveness vary amongst the different milieus. While the conservative or bourgeois and adaptive-pragmatic teenagers even subordinate their family planning to their career, the expeditive and social-ecological teenagers as well as the experimentalistic hedonists want to find their vocation instead of a profession, and a happy life instead of a lot of money.

Young people’s views on topics concerning the future are interesting as well. Nearly all teenagers think that technology and new media are very important topics. While they admit on the one hand that they spend too much time using media, and plead for a more “analogue” life, they nevertheless want digital topics to be discussed by politics and society. The extension of the public Wi-Fi-network, teachers and schools with more media savviness and especially data privacy protection are the issues most important to them with regards to technological development. Teenagers are less interested in ecological issues like environmental protection or climate change. They are ill-informed and are involved very little in this field. Most importantly, they do not believe that their own behaviour could help solve ecological issues.

Although the survey showed that most German teenagers are well-adapted, German youth in its entirety is very open-minded towards social diversity. The first sign of this is that most of them do not consider their nationality as a characteristic of their identity, and they are very sceptical about terms like patriotism or national pride. Also religion does not serve identity development for many teenagers. At the same time there is much tolerance for and interest in different religions.

Asked about the biggest crisis of today, the refugee crisis, the teenagers both agree and disagree. While parts of the pragmatic-adapted and precarious teenagers plus the materialistic hedonists are afraid of a domination of foreign influences and a change of their life circumstances in Germany, the expeditive teenagers and experimentalistic hedonists think that the refugees are more cultural enrichment than a danger. All milieus are in agreement about the necessity and duty to help refugees. While they are quite satisfied with the crisis management of their government the German teenagers are, pointing to Germany’s limits of capacity, and they are disappointed about the lack of commitment of other countries, especially of other EU countries, to take in refugees, and they hope for more support.

It cannot be denied that German teenagers are no rebels. If you want to interpret this attitude negatively, they are just well-adapted and boring. If you want to interpret it positively, they have a desire for harmony. If you think of it, both possibilities are at least not negative. So no reason to worry, no generation will ever be as rebellious as the 1960s generation again.