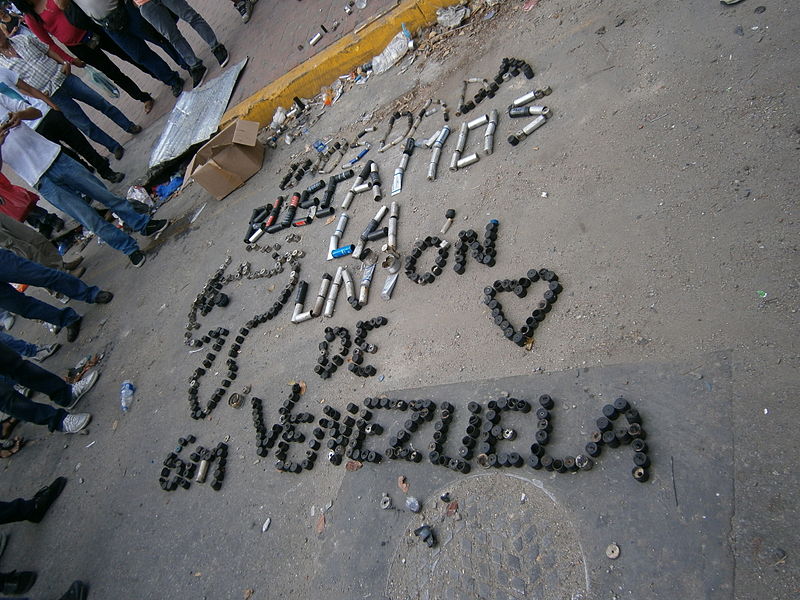 From Wikimedia Commons. The image shows part of a peaceful protest against Nicolas Maduro government, Altamira Square, in January this year.

In the past three weeks Venezuala’s President, Nicolas Maduro, redoubled his efforts to eliminate any kind of opposition and in that way perpetuate his power, following in the footsteps of Castro’s siblings in Cuba. The Bolivarian* dictator sees in each person that tries to think differently an enemy: somebody dangerous that must be eliminated in the name of revolution. Using the excuse that those who want to see Venezuela free, democratic and with republican values are planning a putsch, Maduro ordered the removal of the few dissenting voices that still live there, violating not only local laws but also international Human Rights legislation.

The bus driver turned President, is accustomed to a prostituted Venezuelan Judicial Power system that underlines his illegality – he has ordered atrocities forbidden by almost every Human Rights treaty expecting that the international community will react as a submissive judge; a result that has been achieved from his Latin American accomplices.

As if violating fundamental rights wasn’t enough, in the name of Bolivarian Revolution Crimes against Humanity were committed, typified by the Rome Statute, which was ratified by Venezuela on June 7th of 2000.

On February 19th of 2015, forces of the Bolivarian National Intelligence Service stormed the offices of the Mayor of Caracas, Antonio Ledezma Diaz, and kidnapped him without a written order of arrest issued by competent authority. He’s officially accused of conspiring against the government, but he was in fact subtracted just for being from the opposition.

In article 7 of the Rome Statute it’s established that:

“For the purpose of this Statute, “Crime against Humanity” means any of the following acts when committed as part of a widespread or systematic attack directed against any civilian population, with knowledge of the attack:

h) Persecution against any identifiable group or collectivity on political, racial, national, ethnic, cultural, religious, gender as defined in paragraph 3, or other grounds that are universally recognized as impermissible under international law, in connection with any act referred to in this paragraph or any crime within the jurisdiction of the Court;”

Major sequestration clearly violates this article, particularly with regard to the two outstanding paragraphs, because it was part of Maduro’s operation to exterminate the Venezuelan opposition, turning this into a widespread or systematic attack directed against a civilian population. The intelligence forces deprived Ledezma of his liberty, violating all Human Rights treaties since a written order from a competent authority was omitted and he was absolutely isolated for the first few hours – even his family didn’t know anything about the conditions of his imprisonment. Particularly this man, alongside every opposition leader, are persecuted for political reasons and publicly whipped, with the intention of making people believe they’re enemies and that they must be treated like that. Now it is Maria Corina Machado who knows she may be arrested at any moment; it’s unknown how or when, it’s just known she’ll probably become the next victim of the revolution.

This fact is not unique: remember that Leopoldo Lopez has been in jail, in solitary confinement, for more than a year without any trial, and a delegation headed by Chile’s former president Sebastian Piñera wasn’t allowed to check his detention status.

Recently Venezuela’s Army and Security Forces were ordered to use fire arms to control demonstrations, protests and public meetings. Maduro’s government approved it in a resolution signed by Defense Minister, Vladimir Padrino Lopez. That resolution is repulsive to article 68 of the Venezuelan Constitution and somewhat to article 329. The controversy here is not whether or not it violates the disgraced Constitution of the Bolivarian Republic, is that it has not distinguished between peaceful or violent demonstrations, so the Army or the National Guard would be able to shoot against any kind of protest. This happened on February 24th of 2015 during student protests in Tachira, when local police fired them and killed Kluiberth Roa – a 14 year old child. Quoting again the Rome Statute, in paragraph a) of article 7 it’s mentioned that murder is a Crime against Humanity when it’s committed as part of a widespread or systematic attack against any civilian population. While defenders of the regime may argue that this is not something systematic or generalized, it should be remembered that the Venezuelan dictatorship killed about 50 people in the past year just for participating in demonstrations against Maduro. It should be added that there was never a conviction by the government; by contrast it was orchestrated by them, and the actions of the security forces stood accusing victims of planning a putsch.

The international community must react strongly to these events and activate the legal mechanisms established in various treaties to stop this abuse to humanity by widespread violations of human rights. Nicolas Maduro is not just a local criminal, now he is an international criminal, supported and cheered on by his peers of the “Great Nation”.

*Venezuala’s official name is the “Bolivarian Republic of Venezuela” (República Bolivariana de Venezuela). ‘Bolivarian’ is used for Venezuela after Simon Bolivar freed them.

Franco Mirolo is an IFLRY member representing Argentina and the think tank, Liberty and Responsibility Center of Studies. You can read more about his organisation here (in Spanish).