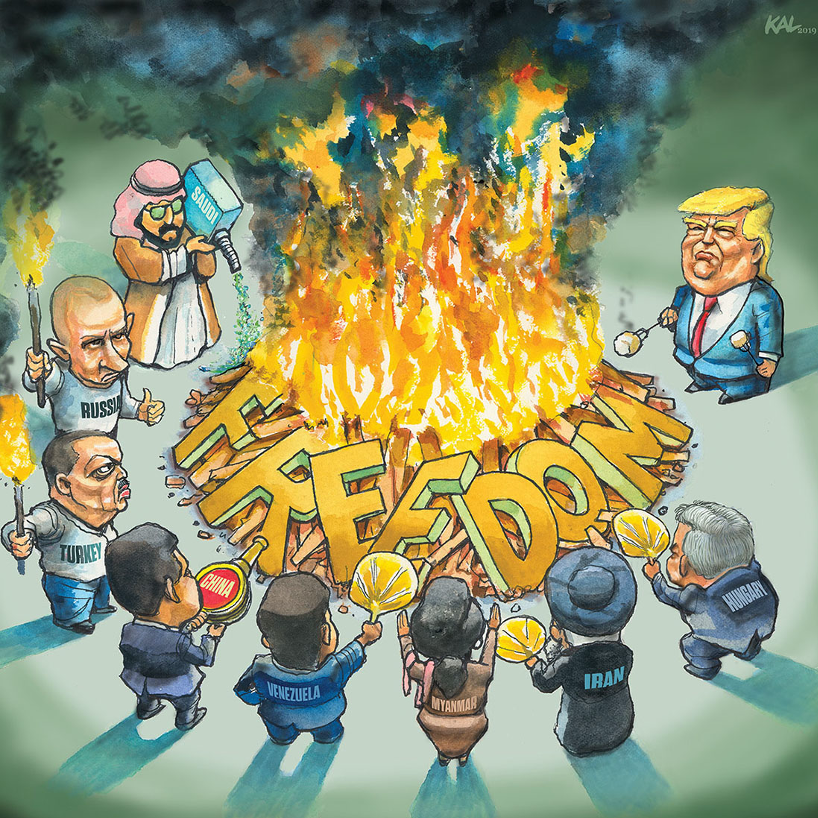 Every year Freedom House carries out an assessment of political rights and civil liberties around the world. Its latest report suggests that a ’13-year decline’ can be observed in global freedom. See below for some of the most important developments.

The report points out that democracy is undergoing an alarming decline all around the world. The fall of the Berlin Wall in 1989, and later the collapse of the Soviet Union, helped bring about a wave of democratisation in the 1990s. Now, many of the countries that made progress have begun to roll back. The report pays particular attention to Hungary and Poland, two post-soviet-bloc countries in the heart of Europe that are becoming increasingly corrupt, anti-liberal and populist. In both countries, the conservative ruling party has attempted to undermine the rule of law in several cases. In Poland, judicial independence is under threat as the government seeks to assert control over the judiciary. While Poland’s Aggregate Freedom Score indicates that the country is still firmly free, Hungary only scored 70/100 and its freedom status declined from Free to Partly Free. This decline can be attributed to the right-wing nationalist Fidesz party, which has used its parliamentary supermajority to amend the constitution. The controversial constitutional changes have strengthened the power of the ruling party and removed a number of checks and balances that ensured democratic governance. Prime Minister Viktor Orbán’s Fidesz party has used its power to impose restrictions on the media, civil society, judiciary, academia and religious groups.

Other examples include Serbia, where, in recent year, the ruling Serbian Progressive Party has intensified the crackdown on independent media, the political opposition, and civil society organizations – potentially jeopardizing its prospect of joining the EU. Most troublingly, several irregularities have been reported concerning the 2018 local elections that have resulted in a decline in Serbia’s freedom status from Free to Partly Free.

Uganda’s status has declined as well from Partly Free to Not Free due to deterioration in the conduct of elections. The country has been ruled by the same leader for more than three decades. Yoweri Museveni has attempted to restrict free expression through surveillance of electronic communications. The government has also implemented a highly controversial tax on social media platforms such as Facebook, Twitter and WhatsApp.

There are some exceptions. There were, for instance, some improvements in Zimbabwe in the last couple of years. After Robert Mugabe was removed from power in 2017, the presidential elections restored the legitimacy of the elected executive power installing the former vice president, Emmerson Mnangagwa, as president.

This year Freedom House has done a special assessment on the status of democracy in the United States. The Trump administration has posed numerous challenges to American democracy since 2016. The report draws attention to President Donald Trumps’ systematic attacks on the rule of law, fact-based journalism, and other principles and norms of democracy. It raises concerns about the Russian attempt to meddle in the 2016 elections, the executive and legislative dysfunction, conflicts of interest, lack of transparency and pressure on judicial independence. The NGO warns that American democracy should not be taken for granted and sees the current administration as a major test for the stability of the country’s constitutional system.