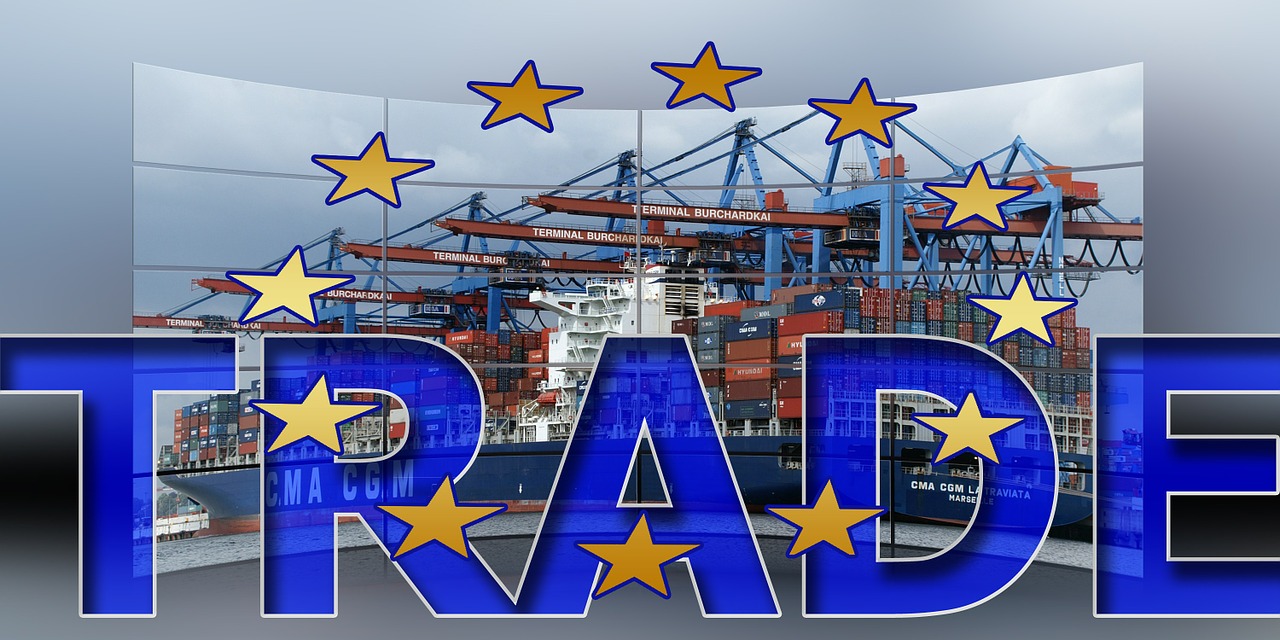 When Donald Trump became president of the United States of America in 2016, many feared that his straightforward and harshly announced policies might have a perceptible impact on the new world order – politically and economically. With him being a businessman, a certain “deal culture” was established in American politics. Tax cuts, immigration laws and a stubborn foreign policy are just a few examples for his style of governing. On the other hand, the People’s Republic of China emerged as one of the most influential global trading partners. With China becoming a member of the WTO in 2001, its economic strength was somehow institutionalized in global trade politics. Most notably, China’s influence on the African continent was subject to recent discussions in both media and politics, raising concerns about human rights issues in affected African communities.

Somewhere in-between, the European Union struggles to entrench its place in global trade politics. As the largest single market in the world, the EU could have a far bigger impact than it has today. This became evident when President Trump announced to apply higher tariffs on EU exports going to the US. The EU did not just seem disoriented, its reaction also showed what position the EU finds itself in.

With Brexit ahead, tensions in Eastern European countries and weak economies in Italy and Spain, the EU quite obviously has many fronts to fight on. Additionally, the EU is about to slide into an environment economists call “Japanification”. Low economic growth, accompanied by low interest rates and low inflation limit the opportunities of monetary policy to further stimulate the economy. Neither lowering interest rates (which seems almost impossible in the EU) nor Quantitative Easing show the necessary effects to boost European growth rates. In countries like Japan, such a process does not affect social cohesion and income or wealth distribution on a large scale, as wealth is already distributed much more just than it is in other “Western” economies. But countries in the EU or North America might experience another outcome. Whereas both Germany and the USA, for example, have to operate in slightly different economical systems, the extent of wealth inequality is at least partially similar. It’s therefore to be expected that a persistent state of “Japanification” might require political action to limit a further increase in social inequality.

On the political side, the European Union faces many other challenges that have emerged over the past few years. A very common term in European politics, which describes the origin of these specific circumstances, is “Multi-speed Europe”. It describes the different paces at which member states integrate themselves in the European Union. Especially with the EU’s eastward enlargement after the Cold War, it becomes obvious why this phrase matched the political situation in the early 1990s quite well. And even 30 years later, “Multi-speed Europe” could not be more up-to-date. This of course is applicable to economic development but can also be put in context to a rather normative view of the European Union. The heritage of Kaczyński’s and Orban’s politics demonstrates how Poland and Hungary were able to integrate their countries economically but at the same time heavily violate European core values. This again shows a significant flaw in today’s European politics.

The reason Chinese expansion is so broadly criticized is because Western-ruled countries fear an increasing Chinese influence in less developed parts of the world. But instead of putting a similar effort in Development Support into e.g. African countries, the EU struggles with homemade problems and is not even able to sufficiently sanction violations of its own current legislation as in Poland or Hungary. Inevitably, the question arises how the EU can strengthen its normative assertiveness both inside and outside its borders. From this point of view, every policy advice probably seems a little too naïve, but visionary thinking is exactly what the European Union needs right now.

The EU is the largest and most successful peace project of the past centuries. Those who were born in Europe over the last 70 years never experienced war and were raised in security and prosperity. But even the EU has a long and difficult story of progression. When my mom’s family came from Italy to Germany in the late 1960s, they were confronted with segregation and hatred. Now, over 50 years later, xenophobia between Germans and Italians seems to be inconceivable. But we again observe racism and exclusion – maybe not against our fellow Europeans, but against other minorities from outside of Europe. Populists in almost every country use the narrative of “us vs. them”, which fuels nationalist tendencies and is fundamentally directed against the core values of the European Union. So, the message for every whole-hearted European should be very clear: it is the duty of our generation to convince each and every citizen in Europe that the benefits of a united EU with open borders and free markets always outweighs possible disadvantages. Because if we are not able to convince citizens on the inside, we won’t be able to convince people on the outside. Nonetheless, the current situation in some Eastern European countries reasonably questions the effectiveness of these measures without a fundamental change in the structure of the European Union.

Without extended legislative competences of the EU, a more binding and comprehensive budget and the ability to effectively sanction violations of EU law, this project is almost doomed to fail. Especially when it comes to trade, strong and tight relations to countries outside of Europe could have the power to promote human rights and other European values. This could not just be the case for climate change issues, but also for development support, migration and the rule of law. For that, we need to reinvent free trade and return to the very core strengths of European trade policies. Right now, the African continent is probably the most accessible and worthwhile region where the European Union could use its influence. The recently established African Continental Free Trade Area offers many opportunities – so let’s be brave and put the European idea forward. There is so much to win and so little to lose.