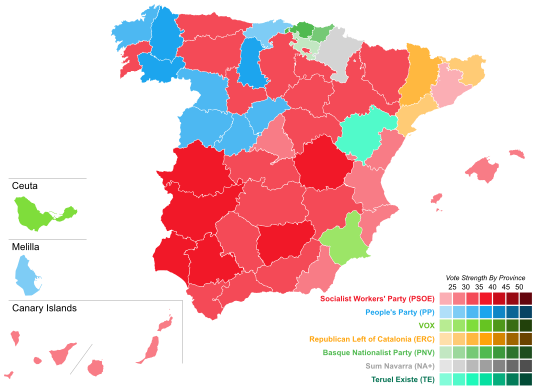 Spain faces a lot of issues these days: the rate of unemployment within society has reached more than 15 %, youth unemployment hit the 30 % mark, the Catalonia conflict rose up again -and now another election.

Only seven months after the last elections in April the Spanish government announced new national elections for the 10th of November. On Sunday the people of Spain had the chance to elect all 350 seats of the Congress of Deputies and 208 out of the 265 seat of the senate- again.

Previously the Spanish prime minister Pedro Sanchez and his Socialist Worker Party PSOE failed to form a government because they missed the absolute majority of votes in the last elections in April. According to article 99.5 of the Spanish Constitution Sanchez was able to call for new elections hoping the distribution of votes might change.

The hopes of Pedro Sanchez to simplify the formation of a government in Spain have been anything but fulfilled. Even though PSOE still won the most votes the share decreased since April. Instead of 123 they have won 120 seats in the Congress of Deputies, means losing 3.

The second most votes after PSOE went to the People`s party of Pablo Casado which is considered conservative or right wing. The PP with Pablo Casado at its head was able to gain 4,1 % of votes since in April. With 16,7% the party that once had the majority of votes in Spain is one of the winners of the last elections.

But the real winner of Sanchez decision to re-elect cannot be found in the political middle. The phenomena of radical and extreme parties rising all over Europe also affected the elections last Sunday. VOX, the party of Santiago Abascal did not even appear in the democracy of Spain eleven months ago.

After last Sunday the appearance and presence of it is no longer deniable. The party, which demands the “order of Catalonia” “to be restored” doubled their seats from the last election until now. Instead of 24 seats the far-right party received 52 seats in the vote.

The conflict of Catalonia dominated the November elections and has divided the society. Word is the discussion about Catalonia only benefited the extreme political parties. In fact, the rise of VOX and other radical parties cannot be denied. Separatist parties in total increased their seats to a total of 23. Meanwhile, VOX gained 4,8 % more votes since April and even dominated the votes of the whole area of Murcia.

With this new election and the rise of VOX Spain took a big step back in history rather than solving present problems. Between these two extreme sides and the great conflict of Catalonia, the biggest loser of the election is almost forgotten.

The ALDE member party – the only economically and socially liberal party of Spain- Ciudadanos has to deal with the biggest losses. From 15,9% of the votes in April their share decreased to 9% The party therefore lost more than a third of their voters since April.

Analyses proves that many mandates switched from the liberal sector to the conservative Peoples`s Party or the right-wing party VOX. The people of Spain do not seem to believe their answer to the Catalonian conflict to be found in liberalism or the policy of the party`s leader Rivera. The culmination of the tragedy was the resignation of Rivera after the reveal of the results of Sunday`s election.

Instead of simplifying the formation of stable government Sanchez`s decision to have new elections caused new chaos in the Congress of Deputies.

Earlier the left party Unidas Podemos had rejected to cooperate with PSOE so that new elections had to take place. After losing seven seats in the November election Pablo Iglesias and his party seem to have changed their position. The latest news reveal that Podemos and PSOE agreed on pre-accord which secures the support of Unidas-Podemos to form a government with PSOE.

For this reason, the coalition Sanchez was hoping for already in April is likely to be formed within the next days or weeks.

There will be a coalition from the left wing without anyone holding the absolute majority in a congress that includes 23 Separatists and 52 far right populist. The stability of this government is questionable considering the challenges it will be confronted with. Yet there is hope that instead of the fifth election in four years, this government will at least last for the next four years.